Thomas Muller set a new Bundesliga assists record and rounded off the scoring for Bayern Munich in a resounding win over Wolfsburg. 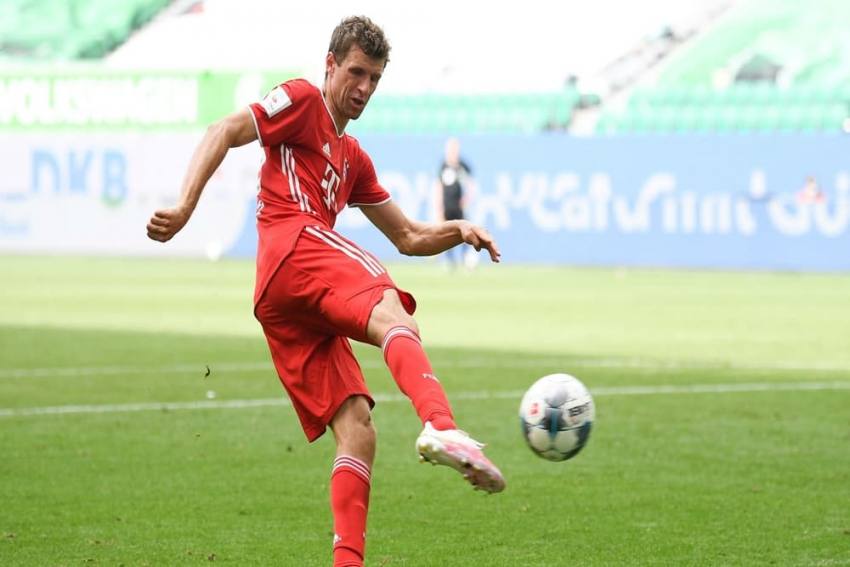 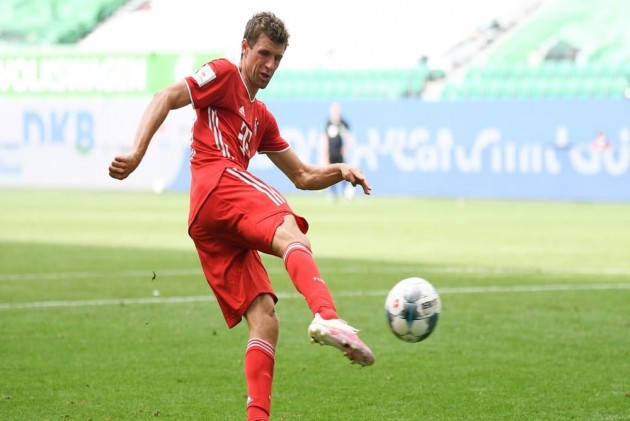 Thomas Muller made Bundesliga history as Bayern Munich capped off their triumphant campaign by defeating 10-man Wolfsburg 4-0 on Saturday.

Having clinched an eighth straight title 11 days earlier, Bayern finally got their hands on the trophy following a comfortable victory at the Volkswagen Arena on the final day of the season.

Muller laid on a record 21st assist of the season as Kingsley Coman got Bayern up and running, before Mickael Cuisance doubled their advantage on the stroke of half-time.

Josuha Guilavogui was shown a second yellow card for a foul on Cuisance and Robert Lewandowski scored the resultant penalty in the 72nd minute, with Muller adding Bayern's 100th Bundesliga goal of the season in the closing stages.

With second-placed Borussia Dortmund defeated at home by Hoffenheim, Bayern finished the season with a 13-point cushion and Wolfsburg slipped to seventh and missed out on automatic Europa League qualification.

Coman got the celebrations started in the fourth minute, latching onto a brilliant throughball from Muller and guiding a fine finish across Koen Casteels and into the bottom-left corner.

Manuel Neuer kept out Josip Brekalo, and Casteels made a good save from Serge Gnabry at the other end.

Lewandowski was denied by Casteels but there was nothing the Wolfsburg goalkeeper could do to stop Cuisance's left-footed, 20-yard curler from finding the top-left corner.

Casteels survived a VAR review of a potential handball outside the box, while the video assistant upheld the decision to rule out Daniel Ginczek's stoppage-time goal at the end of the first half for a foul on Alvaro Odriozola.

After being denied by Casteels again, Lewandowski finally hit the target in the 72nd minute. The Poland international scored his 34th league goal of the season after Guilavogui felled the impressive Cuisance.

Bayern made the most of their numerical advantage by scoring a fourth seven minutes later, Muller drilling home at the back post and the celebrations stepped up a gear after the final whistle.

What does it mean? Bayern maintain momentum

A treble is well and truly on the cards for the Bavarian giants, who extended their club-record winning run to 16 games.

However, after the DFB-Pokal final next weekend they face a month off before continuing their Champions League campaign with the second leg of their last-16 tie against Chelsea.

With teams from the Premier League, Serie A and LaLiga having far less time to rest before Europe's premier club competition returns, Bayern will hope to continue riding this wave during their break.

Hansi Flick has brought the best out of Muller since taking over at Bayern. The World Cup-winning attacking midfielder surpassed Kevin De Bruyne's Bundesliga record of 20 assists in a single season by setting up Coman for the opener.

Gnabry not on form

There was nothing riding on the game for Bayern, but it would have been a far more comfortable finale had Gnabry been able to finish the chances that came his way. He missed a pair of great openings in the first 15 minutes of the second half.

Bayern will aim to seal the second part of a prospective treble when they face Bayer Leverkusen in the DFB-Pokal final next Saturday.