Why Jasprit Bumrah Is The Joker In Virat Kohli's Pack

India are in the semis of 2019 Cricket World Cup. Jasprit Bumrah's 17 wickets have been a major reason for this emphatic run. 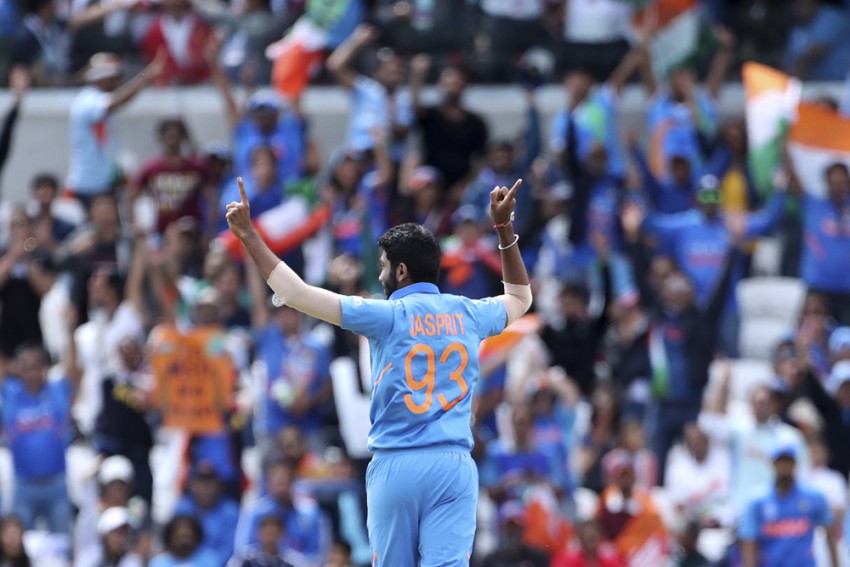 It was largely down to Jasprit Bumrah and the recalled Ravindra Jadeja that India were able to restrict Sri Lanka to 264/7.
AP
Outlook Web Bureau July 07, 2019 00:00 IST Why Jasprit Bumrah Is The Joker In Virat Kohli's Pack 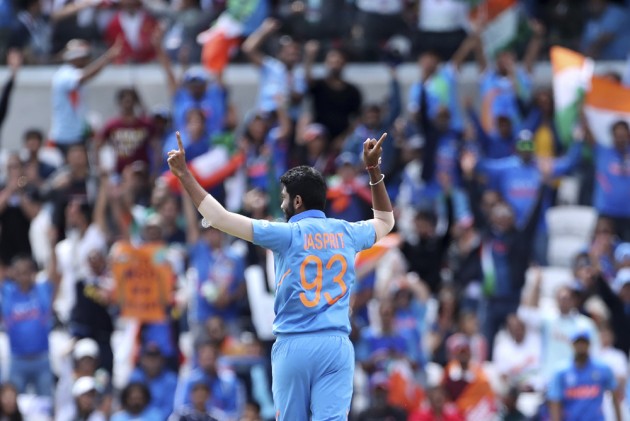 He may possess one of the most unconventional actions in the ICC Cricket World Cup 2019 - but Jasprit Bumrah proved yet again on Saturday why he is also one of the most effective bowlers in the competition.

In the same way that fellow title hopefuls Australia rely on Mitchell Starc and New Zealand have complete faith in Trent Boult and Lockie Ferguson, the dynamic Bumrah is India’s ‘go-to’ quickie.

When the chips are down, skipper Virat Kohli knows he can simply toss the ball to the 25-year-old from Ahmedabad and more often than not he will wrest back control of a match.

It was largely down to Jasprit Bumrah and the recalled Ravindra Jadeja that India were able to restrict Sri Lanka to 264/7 at Headingley, a target India knocked off with seven wickets and 39 balls to spare thanks to centuries from Rohit Sharma and KL Rahul as they wrapped up the group stage in dazzling style.

"We wanted to play good cricket but we didn't expect to do this well heading in to the semi-finals,” said Kohli after India made it seven victories from nine matches. “That's what hard work gets you.

“I am really proud of this team, they are amazing people. More or less everything is set for the semis but we don't want to be one-dimensional. We need balance in the side. If we play well we can beat anyone, if we don't play well anyone can beat us.”

While Bhuvneshwar Kumar was being plundered for 10 runs an over in the early going, Sri Lanka’s batsmen found it impossible to get on top of his opening partner Bumrah at the other end.

Dimuth Karunaratne was his first victim of the day, slashing a wide one to MS Dhoni behind the stumps to provide Bumrah with the 100th ODI wicket of his career.

The Indian fast bowler became the second fastest to reach the milestone for his country, having accomplished the feat in 57 innings. Only Mohammed Shami (56) has gone to his century quicker.

Bumrah, steaming in with his unorthodox stuttering run up, was on fire and he soon followed up by forcing Karunaratne’s fellow opener Kusal Perera to snick another catch to Dhoni.

Perera had been lucky to escape moments earlier when he lofted Bumrah into the deep. Hardik Pandya and Kuldeep Yadav almost collided as they tried to get under the ball and the latter was unable to hang on when he finally got his hands to it.

Bumrah also trapped Avishka Fernando lbw for a duck before the umpire’s decision was overturned on review.

The Indian paceman has the ability to tie batsmen down for lengthy spells, frustrating them to such an extent they are often forced into a false shot that can bring about their downfall.

The skilful Bumrah bowls a lethal yorker but, used as a shock weapon, he can also deliver a mean 90mph bouncer of the sort that smacked square into the grille of Lahiru Thirimanne’s helmet.

After claiming 2/14 in his opening burst of four overs, Kohli decided to give his linchpin a rest and, without Bumrah in the attack, Angelo Mathews was able to repair the early damage for Sri Lanka with a century partnership alongside Thirimanne (53).

Mathews clearly has a fondness for Indian bowlers because he started slowly before moving smartly through the gears to chalk up his third century in ODIs, all coming against the same opposition.

It was almost written in the stars that his innings would eventually be ended by Bumrah, and so it proved as the paceman returned to the attack in the closing overs to remove Mathews.

Bumrah’s 17th wicket of the tournament, only Starc (26) and Mustafizur Rahman of Bangladesh (20) have bagged more, helped him finish with excellent figures of 3/37 from his 10 overs.

Jadeja, one of two changes to the side, also picked up 1/40 in his first appearance at this World Cup.

The talented all-rounder is a special favourite of the Indian fans and they responded with huge cheers when his name was read out on the team sheet before the start.

Jadeja’s miserly bowling and his effervescent performance in the field has now put him in a strong position to keep his place in the team for next week’s semi-final.

Sri Lanka’s total appeared competitive enough, on only one previous occasion has a team successfully chased down a bigger target in the competition, but the indefatigable Sharma and his opening partner Rahul had other ideas.

The pair gave the crowd a late-afternoon treat in the summer sunshine with a masterly exhibition of strokeplay. Pouncing ruthlessly on anything loose, the two Indians cut and drove their side into a commanding position with a stand of 189.

Rohit Sharma on a Roll

Rohit Sharma continued his astonishing sequence of 2019 World Cup scores by notching a record sixth century with a venomous pull for four off Kasun Rajitha.

Only he and compatriot Sachin Tendulkar have amassed half a dozen World Cup tons but, while Tendulkar’s tally came in 44 innings, Sharma has needed just 16 to reach the landmark.

By the time Rahul steered paceman Lasith Malinga for a single behind square to reach his century, victory was all but assured for India.

"Lasith is a champion,” said the record-breaking opener. “He is a match-winner and he has shown it over the years. The world of cricket will miss him.”