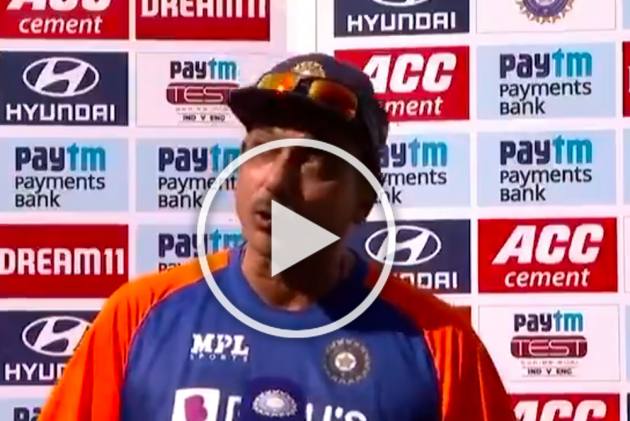 After India's emphatic win over England in the fourth and final Test match in Ahmedabad, head coach Ravi Shastri gave a fiery 'speech', covering almost every aspect of the series, from players' performances to pitch controversy, to ICC World Test Championship, and living in the bubble.

The former India captain was effusive while hailing Rishabh Pant's performances, both as a wicketkeeper and batsman. He said that Pant's game-changing hundred was the best counter-attacking knock that he has seen by a number six Indian batsman on home soil.

"He has worked like hell in the last three or four months and the results are showing. Yesterday's innings is the best counter-attacking innings, I have seen in India by an Indian, especially at number six when the ball was turning," Shastri said in an interview with broadcaster Star Sports.

Pant hit a brilliant 101 off just 118 balls to help India fight back and win the match by an innings and 25 runs.

"We were hard on him. Nothing comes easy and he was told in no uncertain terms that he has got to respect the game a little more. He has got to lose some weight and work hard on his keeping. We know the talent he has. He is a genuine match-winner and he has responded."

After losing the series opener in Chennai, India hit back to win the four-match series 3-1 and qualify for the ICC World Test Championship against New Zealand.

"Why should I hold back? I attribute it to the groundsman," Shastri said. "I think Ashish Bhowmick is an outstanding groundsman, he knows his job. He has learnt it the hard way. He worked with Daljit Singh, who was a master curator... Who will complain against a track like this? It is fantastic entertainment, for both teams and the game and the result 3-1 doesn't really suggest how close the series was."

The 58-year-old also said that Indian players had been like "zombies" during the first Test and needed a "kick in the backside" to overturn the 0-1 deficit.

"I think the first Test in Chennai would have been different if we had a few more days off," Shastri said. "It's no excuse; England outplayed us there. The boys were like zombies. They were tired, and the fact that there was no crowds didn't help. Because everything was flat. So was the performance. But then a kick on the backside to re-ignite the pride in the system can make a lot of difference. And it showed in the last three Tests."