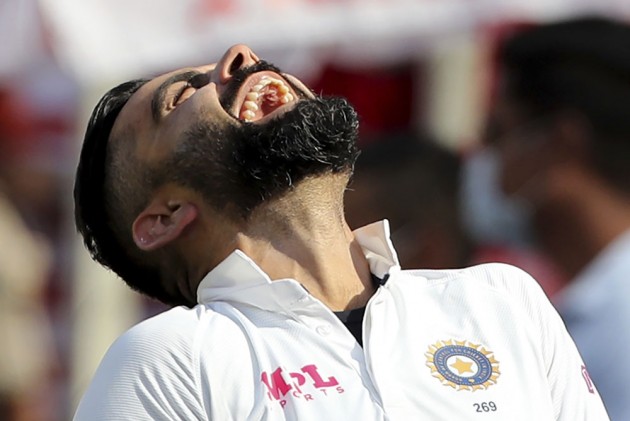 Virat Kohli believes India delivered on the challenge to show "fearlessness" against England as the hosts scorched to a series-clinching victory in Ahmedabad.

A crushing win by an innings and 25 runs at the Narendra Modi Stadium sealed a 3-1 triumph for India, capping an impressive recovery after going down to defeat in the opener.

The first two Tests were played in Chennai, with the third and fourth in Ahmedabad, and once India were jolted to form by their early setback they found dominant form.

"I think the comeback pleased me the most," Kohli said. "I think the first game was a bit of an aberration, in the way that we play as a team.

"There was just a hiccup and I think England outplayed us. From the next game onward it was more exciting cricket and we got into the game early."

India have booked a showdown with New Zealand in the World Test Championship final, which is due to take place in England in June, at Lord's if COVID-19 conditions allow.

"Now we can accept we are in the final," Kohli said. "It was more of a distraction until now for us, because we are a side that is very committed to playing Test cricket and these extra things can be a distraction.

"Now we are in the final which we can't wait to be a part of."

That victory against England means India finish the league phase of the inaugural ICC World Test Championship with a fine view from the top of the table #INDvENG | #WTC21 pic.twitter.com/rXFiKPXdB7

India had a host of star performers against England, with a number of outstanding contributions in the final match. Rishabh Pant was named man of the match after his stellar century and Axar Patel took nine wickets to reach 27 from his first three Test appearances, having forged an outstanding spin partnership with Ravichandran Ashwin.

Kohli pointed to Rohit Sharma's 161 in the first innings of the second Chennai match as the most telling contribution in the series.

"Ashwin's obviously been a banker in the last six, seven years in Test cricket – his numbers speak volumes for what he's done in the last few years," Kohli said, speaking at the post-match presentation.

"But I think Rohit's knock was the defining moment in us coming back into the series, getting 160 on that pitch is as good as a 250 on any good batting wicket

"It's definitely one of his best Test knocks, if not the best, and that gave us the kind of momentum we needed as a side and really got us into the contest. It was an outstanding innings."

Kohli explained: "After the first game, we had to up our body language. We spoke about the fact that nothing's a given whether you're playing at home or away.

"Every team at international level is a quality side and we need to be at our A game to be able to beat them and that's exactly what our mindset is.

"I know in future we'll have hiccups, we'll have a few things that will be of concern, but we'll have to keep ironing them out and that's been the hallmark of our team.

"Our bench strength is as strong as it's ever been and that's a great sign for Indian cricket.

"The idea was to have youngsters who come in and perform with fearlessness, take the situations on, so when the transition happens eventually it's not difficult for Indian cricket and the standard doesn't fall below what we have set in the last few years."

He pointed to Pant, Washington Sundar and Axar showing tenacity with the bat in India's innings in the fourth Test.

"These are the kind of situations where individuals stand up and say, 'Okay, I'm going to make a mark and make a name for himself and be that player that can be counted on', and that's exactly what they've done," Kohli said.