Harry Kane set up Son Heung-min to score for Tottenham against Arsenal - his 10th assist in 11 games, matching a Premier League record 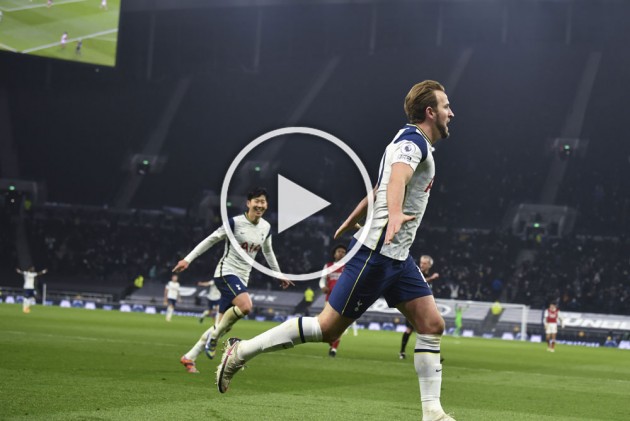 The Spurs skipper played the ball to Son out on the left from a deep position and the South Korea international curled in a sublime shot after carrying the ball forward.

It was the 10th goal Kane has set up in the Premier League this season, doing so in just 11 games.

Just take a look at this beauty from Son Heung-min. For me it's the audacity.

That puts him level with Ozil for the fewest appearances to reach double figures for assists. Arsenal outcast Ozil - left out of the Gunners' Premier League and Europa League squads this term - had held that particular record on his own since 2015-16.

11 - Harry Kane has assisted his 10th Premier League goal of the season in just 11 games; no player has ever reached 10 assists in fewer appearances from the start of a campaign in the competition (level with Mesut Özil in 2015-16). Provider. pic.twitter.com/0An4YFHWNu

Kane then struck late in the first half to give Tottenham a 2-0 interval lead, and Son was the provider.

Their contributions in the opening 45 minutes mean Kane and Son have now directly combined for 31 Premier League goals, which is the second most of any duo, beaten only by Didier Drogba and Frank Lampard for Chelsea (36).

England striker Kane has laid on eight goals for Son in the Premier League in 2020-21, bettered only by Liverpool's Stan Collymore to Robbie Fowler and Newcastle United's Mike Newell to Alan Shearer (both nine) in a single campaign in the competition's history.