The cocking lever of Bhaker's pistol broke in the qualifications and in getting it fixed, the 19-year-old shooter lost more than 15 minutes 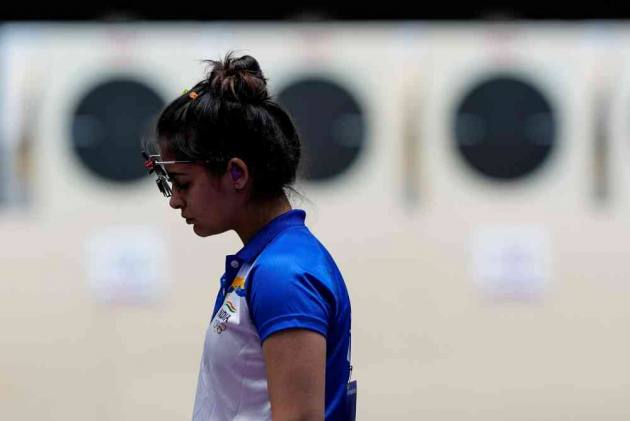 The cocking lever of Bhaker's pistol broke after the 16th shot in the qualifications and in getting it fixed, the 19-year-old shooter lost more than 15 minutes, which affected her rhythm when she resumed shooting.

At that point she had another 44 shots left to take in the next 55 minutes. But the forced break due to the repair-work meant she'd have to complete the qualification round in 36 minutes.

Francesco Repich, owner of the gun manufacturing company, said that his repair outlet was located close by but still no one approached him from the Indian camp for help.

The series of social media posts that he put up did not go down well with the NRAI, which had sent him a legal notice, the result of which was the apology.

"I wish to submit an unconditional apology for posting an insensitive comment on my Facebook page. I am extremely sorry for hurting your sentiments. I understand and acknowledge that I should have expressed myself in a more responsible and discreet manner," Repich said in a mail addressed to NRAI secretary general D V Seetharama Rao.

He said that his comments were prompted by shooters he is fond of -- Bhaker being one of them -- not able to perform at the level they are capable of.

"However, I would like to clarify here that the sentiment and intention behind my comment was not at all influenced by any vested interest or racism (as apparently interpreted by your kind self), rather it was just a heartfelt expression of an ardent shooting professional.

"Just like you and many others, even I had high hopes from the capable and potential Indian shooting team..."

These remarks forced the NRAI to demand an apology from the gun maker.
Bhaker was in fourth position when the malfunction happened -- the top eight make it to the finals.

By the time she finished the second series of 10 shots, most of her competitors were well into their fourth series -- there are six series, or 60 shots in the qualification round.

Olympic rules do not compensate for lost time in such a scenario.
Besides Bhaker, Morini pistols are used by several other Indians, including Saurabh Chaudhary and Abhishek Verma.

Repich's contention was that his people could have repaired the pistol quicker.
He added, "It was my sheer disappointment that led me to make that insensitive and irresponsible comment just in the heat of the moment.

"I request you to kindly accept my apology and do away with any hard feeling against me or my business. I am proud of my association with the Indian shooting industry and I assure you that nothing of this sort will happen in future again."

In one of the posts Repich also said that the Indian coaches refused ‘sighting shots’ when the judge asked them if they wanted to check the pistol after repair.
Bhaker's coach Ronak Pandit had said they had already lost a lot of time and so he was looking to get Bhaker started again with her shooting.

A day after Bhaker's first of the three events at the Games ended in heartbreak, Repich wrote in a Facebook post, "Today (Monday), we had the opportunity to speak with the Indonesian judge who dealt with the case of Manu Bhaker. The judge also does gun maintenance in his club and therefore knows the problems well.

"He (judge) told us the following: 'The (Indian) coaches said the pistol had slightly loosened the charge screw. He followed the athlete and the coach into the room next door where he saw the coach screw the lever back and replace the electronics without knowing why. Time taken about 10 minutes.

"In his opinion, more qualified people would have taken less (time). In the end he (judge) asked the coach if sighting shots were needed and the answer was no!'"
"It does not seem necessary to post a video with the interview with the judge."
Repich also said that he was at the range early to help out with the repair and maintenance of guns.

"The problem is that many coaches think they are technicians too. When you do mistake it is always easy to give to others instead of taking responsibility of what you do!" wrote Repich.

In a Facebook video posted on Sunday, Indian pistol coach Ronak Pandit stressed that Repich's office was situated far away from the spot where Manu was shooting, and that it wouldn't have been prudent on their part to go all the way there for repairing the gun.
"The cocking lever of the weapon broke after 16 shots. We had to get it changed. She (Manu) had 44 shots remaining in 56 mins and then when we started it was 44 shots in 38mins," Pandit said.

"To change the lever, the grip and the trigger circuit has to be removed. They were put back but then the circuit would not work so we had to change that again. She was placed fourth when all this happened and by the time she resumed, others were in their fourth series while she was still on her second.

"No extra time is allowed according to the rules and the pressure at the end was too much. We are proud of the way she shot."