Deepika Kumari could not earn India an elusive Olympic medal, while debutant Pravin Jadhav topped the ranking round. Atanu Das was knocked out in pre-quarters 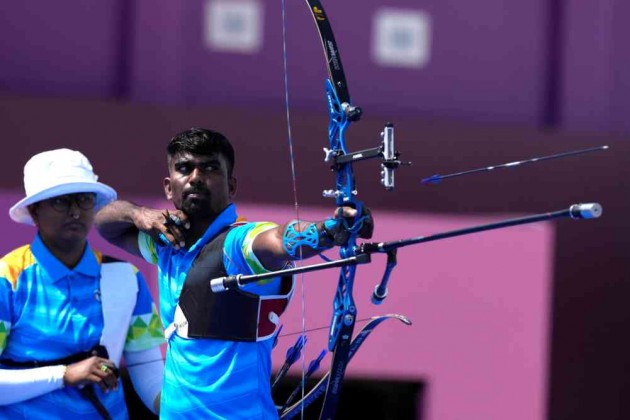 There were more misses than hits for the Indian archers who ended up being "just tourists" in Tokyo, returning from the Olympics without a medal yet gain. Tokyo Olympics | Full Schedule | Sports News

Deepika Kumari could not earn India an elusive Olympic medal but the most decorated Indian archer became the first Indian to make the individual quarters.

But the silver lining came from debutant Pravin Jadhav, the son of a wage labourer from the drought-hit Satara district of Maharashtra.

Not only the 25-year-old topped among the Indians in the ranking round, the Army archer showed fine shooting before going down to world number one Brady Ellison in round two.

Atanu Das provided the "oh moment" for Indians when he knocked out former Olympic and world champion Oh Jin Hyek to make pre-quarterfinals for a second successive time in the Games but only to lose to five-time Olympic veteran Takaharu Furukawa.

The biggest letdown was the power archery couple -- Deepika Kumari and Atanu Das -- who were not able to overcome the pressure factor despite having the experience of five Olympics in between them.

Overall, it was the story of 'Korea-phobia' from the Indians.

Be it Deepika, who went in with the world number one tag, the men's or the mixed pair teams, all the four archers faltered at the Korean hurdle, in their respective quarterfinals.

Fresh from winning five World cup gold medals this year, Deepika was a big let down, especially in her individual match-up against 20-year-old Korean An San, the eventual gold medallist, and lost in six minutes.

In the mixed team QF too, Deepika capped a sorry picture and could not find the inner 10-ring even once as she along with Jadhav lost out to their Korean rivals.

In the aftermath of India's campaign, Deepika and Atanu further vented their ire splitting their mixed team partnership.

Former world champion Dola Banerjee said it was mistake in preparation if Deepika did not practice with her teammates.

"I don't know if she trained with others or not. But it would be a big mistake if she chose only Das to train with," the 2007 world champion told PTI.

"During our days we were training with all of our teammates. We never knew whom we would play with. Knowing that you are the only female archer to represent India, you should have trained with your teammates."

There was nothing wrong in giving Jadhav the chance as they went by the FITA rulebook, she added.

"Yes, you have option to stick to your original pairing but every country sends in their top-ranked player as per the rules.

"What if Das and Deepika had lost out too? The repercussions would have been severe. Nobody wanted to rake risk," she said putting an end to the drama.

So what went wrong for the Indians?

Their match play scores might hide this, but the Indians gave early indications, capping a flop show in the ranking rounds that proved decisive.

Digging a little further would reveal how World Cup gold medallist Atanu had cracked under pressure against his teammates --  a rookie Jadhav and a 39-year-old veteran Rai.

In the 72-arrow ranking round Das found his stiffest competitor in Jadhav as they going neck-and-neck with scores of 329 each after 36 arrows.

In the back end, Das crumbled under pressure capping eight 8s and also misfired a 5 in the final arrow of penultimate round as Jadhav nosed ahead by three points for a 31st place finish.

Putting this in perspective, an unknown Mangal Singh Champia had shot 678 to finish second at Beijing 2008, but the famed Indian archers were nowhere close.

They combined for ninth ranking for the team event, as Deepika too finished in the same place for individuals, and it was no different for the mixed team.

It proved to be a disaster as they drew the top-seed (Korea) for a potential quarterfinal match-ups.

"We could have been more calculative in the ranking round. The coach plays a huge role there and I guess we could have avoided being ninth," Dola added.

Experts blamed it on the system for not being able to create a supply line and "letting the top players dictate terms".

"When the federation listens to the archers' demands then it's doom. There has to be someone accountable sitting at the top like (former secretary general) Paresh Nath Mukheree who took decisions and also quit after London 2012. Our players are running the show now," a former coach said.

"During the times of Pareshda, there would be national ranking tournaments almost every month, something that has stopped since then. Only one Nationals is not enough," another official said.