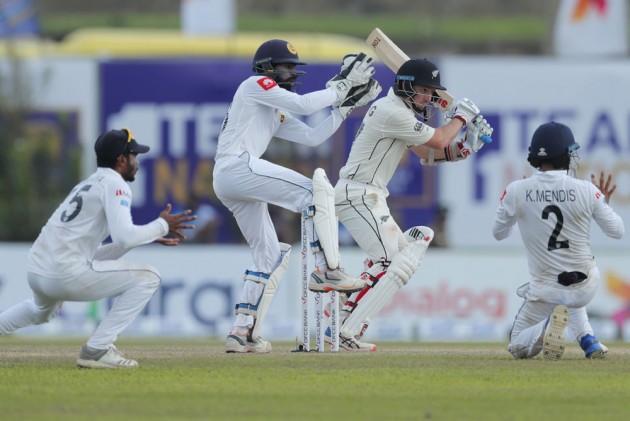 A battling unbeaten half-century from BJ Watling frustrated Sri Lanka and gave New Zealand a lead of 177 at stumps on day three of the first Test in Galle.

Watling fought it out on a turning pitch and the wicketkeeper-batsman was still there on 63 when bad light brought an end to play late in the day, with the Black Caps 195-7 in their second innings.

Sri Lanka were dismissed for 267 in the morning session to take a first-innings advantage of 18, Niroshan Dickwella top-scoring by reaching 61 on Friday.

Lasith Embuldeniya, who finished the day with 4-71, struck twice to put New Zealand in all sorts of early trouble on 25-3, but Watling led the recovery and Tom Latham made 45 to leave the match nicely poised.

Stumps on day 3 & BJ Watling stands unbeaten on 63. The lead is 177 with 3 wickets in hand. I know we’ve asked each day - but who do you think has the upper hand!? #SLvNZ#contest pic.twitter.com/Pv3X9J3P5a

Sri Lanka added 40 runs in the morning after resuming on 227-7, Dickwella and Suranga Lakmal (40) extending their eighth-wicket stand to 81 before William Somerville (3-83) and Trent Boult (2-45) wrapped up the innings.

Jeet Raval fell tamely chipping Dhananjaya de Silva (2-16) to Dimuth Karunaratne in the covers and Lahiru Thirimanne took a brilliant skier running back from mid-on when Kane Williamson (4) tried to hit Embuldeniya over the top.

Ross Taylor gave his wicket away too easily, charging down the track and getting nowhere near the pitch of the ball, edging Embuldeniya to De Silva at first slip for three.

Latham and Henry Nicholls steadied the innings, with opener Latham launching Embuldeniya over midwicket for six.

Akila Dananjaya ended a stand of 57 by removing Latham, and the wicket of Nicholls soon followed. The impressive Embuldeniya then reduced New Zealand to 124-6 by dismissing Mitchell Santner on the stroke of tea, but Tim Southee was dropped twice as Sri Lanka allowed the lead to grow.

Watling played with great conviction under pressure, bringing up a resilient 17th Test fifty before Embuldeniya had Southee (22) stumped, ending a seventh-wicket partnership of 54.

The composed Watling struck Lahiru Kumara for back-to-back boundaries and Somerville hung in there prior to play ending under gloomy skies.