SL vs IND: Shikhar Dhawan Says, Will Try Out New Guys But Only After Ensuring Series Win 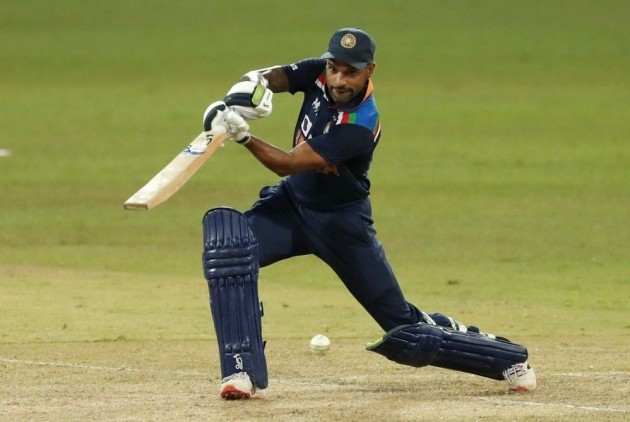 India captain Shikhar Dhawan said the team management will try out new faces but only if they fit into the best playing XI during the upcoming three-match T20 International series against Sri Lanka, starting in Colombo on Sunday. (More Cricket News)

Like India blooded as many as five newcomers in the final ODI, Dhawan indicated on Saturday that he is not averse to experimenting with new men like Ruturaj Gaikwad, Varun Chakravarthy and Devdutt Padikkal in the coming games, but series win will remain a priority.

"New guys definitely have the opportunity to play. We have to win the series. In the last ODI, there was a good opportunity to give some youngsters a chance and give them a taste of international cricket, because we had already won the series," Dhawan told mediapersons ahead of the first game.

"Now it's a new series, so we will of course go in with our best XI first. We will try to win the first two matches, and then according to the situation, we can experiment in the last game if needed," Dhawan said.

However, he agreed that the IPL has made these youngsters ready for international cricket.

"Of course they are ready, that's why they are here. As you saw, youngsters have performed so well in the ODI series, so they'll be taking that confidence ahead in the T20I series. You will see them perform really well.

The changes in the team will be as per the situation.

"It's going to be decided according to the situation. As I said, if we win two matches, then we have options to play any combination we want to. Otherwise, our main goal is to play the best XI to win the series.

"That's our first priority. After that, if we can seal it like we did in the ODIs, we can think of experimenting."

He also feels that the current Sri Lankan team has shown a marked improvement through the ODI series.

"I think the competition will be good. You saw the Sri Lankan team improve a lot in the last two matches. They played really well and they are a good team, with a lot of youngsters.

"So I think it will make for a good contest between the two teams. We have both already played three matches now, so both teams know each others' strengths and weaknesses. That's a good thing, and it will add to the challenge (of the series)."

On a personal note, Dhawan knows that even he is auditioning for a place in the T20 World Cup side.

"It is very important. Of course, any international match has its own impact, and whenever you perform internationally it makes a huge impact.

"So, on a personal note, I am really looking forward to perform over here and make my place more stronger for the World Cup. Then we'll see how it goes in the future."

We haven't been intimated yet about players leaving for UK

The skipper said that the team's strategy will be prepared keeping both Prithvi Shaw and Suryakumar Yadav in mind as they haven't received any formal intimation from the BCCI about their leaving the team.

But he did agree that Suryakumar could be an useful player in red ball format, too, if he gets a chance.

"He's batting very well, whether it's ODIs or T20Is. He has vast experience of domestic cricket too, and he's a very mature player.

"Of course if he gets an opportunity, if the selectors think he should be in the Test team, he's a very well-equipped technical batsman. He's a smart batsman, smart thinker of the game. So I'm sure he'll do very well in any format."