PV Sindhu moved to Gachibowli Stadium from her long-time mentor's academy. Media speculated a rift between her and national chief coach Gopichand 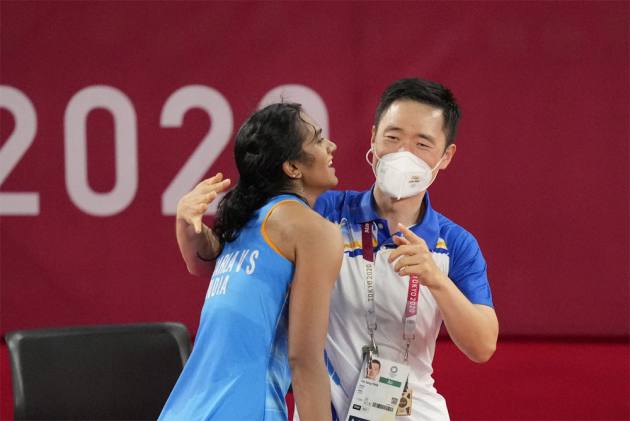 PV Sindhu thanked Park Tae-Sang for making a lot of sacrifices and helping her win the Tokyo Olympics bronze medal on Sunday. The world badminton champion said the Korean made her a better player in the last one year when the COVID pandemic played havoc with the sporting calendar, including delaying Tokyo 2020.

"Yes, the pandemic created delays and a lot of unhappiness but for me it was a good time to learn a few things from Park. He is such a sweet coach and I will like to have him in Paris 2024," Sindhu said during a media interaction on Monday from Tokyo.

Sindhu has had three coaches since winning the silver medal at Rio 2016. But with Park, who came in after Kim Ju Hyun quit soon after Sindhu won the world championship in Basel in August 2019, the 26-year badminton superstar looks quite settled.

For Park, Sindhu has been his first success story and a subject that once made him quite "nervous."

"I was under pressure when I started working with Sindhu but we gradually got used to each other," said Park, who has barely been home in Korea since February last year. "My three-year-old daughter is waiting for me," a smiling Park said.

If the body language of Sindhu and Park was any indication, PV Sindhu certainly did not miss Gopichand in Tokyo. "We made several eye contacts during the knockout games. Those are special things between a player and coach," explained Sindhu.

"Mr Park has really calmed me down during the tense moments. The only two Hindi words he has learnt is "Aaram Se" (just relax) and he has used them well during the semis and the bronze medal game (against China's He Bing Jiao)," said a smiling Sindhu.

In February this year, Sindhu moved her training base from the Gopichand academy to the Gachibowli stadium. It caused a lot of media speculation that she had fallen apart with her long-time mentor and chief national coach Pullela Gopichand for want of personal attention.

Saina Nehwal had also made a similar complaint after winning the bronze at London 2012 before moving out of the Gopichand academy only to return to her guru later on. Sindhu is unlikely to do that.

On Monday, Sindhu said her decision to move out of Gopichand's academy was the "best decision" she took.

"There was no controversy (with Gopichand). Gachibowli is an international stadium and the conditions are similar to what we get in big tournaments like the Olympics.

"In Tokyo the drift was playing a big role in judging aerial shots and at Gachibowli I had got used to these things. Our decision stands vindicated and I am really happy for that," said Sindhu.