PSG, after failing to win the French domestic league last term, have now extended their perfect start to the new Ligue 1 season with three wins in three 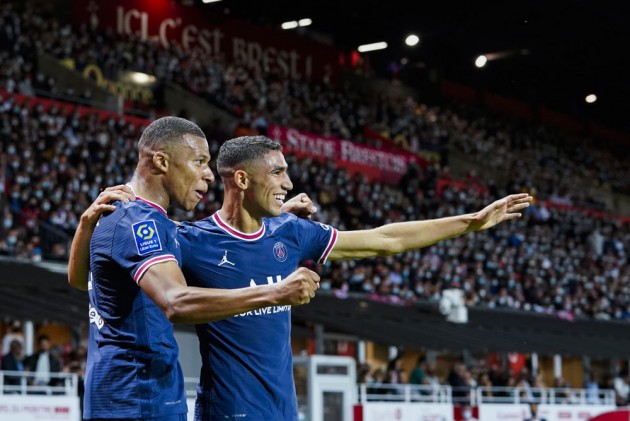 Talks of Lionel Messi's impending Paris Saint-Germain debut continue to dominate the football world ever since his free transfer from Barcelona, but the Argentine quietly remained in the background, allowing his new teammates to steal the show. (More Football News)

In yet another clinical display, Mauricio Pochettino's men beat Brest 4-2 Friday night to go top of the Ligue 1. PSG, after failing to win the French domestic league last term, have now extended their perfect start to the new season. Three wins in three, and the star of the match was Kylian Mbappe.

Ander Herrera (23rd) and Mbappe (36th) gave PSG a two-goal lead inside the first 36 minutes, but Franck Honorat reduced it just before half-time. Then, Idrissa Gueye and Angel Di Maria wrapped up the win with goals in the 73rd and 90th minutes respectively.

Mbappe almost gave PSG a third-minute goal as PSG started the match in a dominant fashion at Stade Francis-Le Ble. But his effort at the near post was denied by a fine Marco Bizot save.

Pochettino had left Messi, Neymar and Sergio Ramos out of the squad. But the favourites, despite a late push from Brest through Steve Mounie's goal in the 85th, took all three points.

Pochettino, however, will be concerned about conceding two goals. They have now conceded five in three games for the first time since 2004.