The Red Devils maintained their place at the top of the Premier League, three points ahead of the champions in fourth, with a 0-0 stalemate at Anfield on Sunday.

Despite enjoying just 34 per cent of the possession, United limited Liverpool to very few opportunities as the Reds went three league games without scoring for the first time since March 2005.

In fact, United should perhaps have snatched victory in the second half, with Alisson making good saves to deny Bruno Fernandes and a clear-cut Paul Pogba chance.

Solskjaer stated after the match that he did not feel his side deserved to win, though, arguing they should have done more throughout to threaten a centre-back partnership of Fabinho and Jordan Henderson.

And Ince, who played for both teams, claimed Solskjaer deployed the same tactics that saw Mourinho "absolutely slaughtered" during his time as manager at Old Trafford.

16 - Manchester United are unbeaten in their last 16 away matches in the Premier League (W12 D4) – only once have they gone longer without a defeat on the road in the competition (17 games ending in September 1999). Striving. #LIVMNU pic.twitter.com/oLl3lSdNPv

"You could see the game plan with Manchester United, you saw it from the first whistle – they defended very, very deep," Ince told talkSPORT 2. "I thought United were very poor in the first half.

"I remember a few years ago when Mourinho took United to Anfield, he parked the bus and got absolutely slaughtered for it. That's exactly what Ole Gunnar Solskjaer did in the first half.

“We knew they were going to defend and rely on their quick players like Anthony Martial and Marcus Rashford to counter-attack Liverpool. But I've played in Man United teams… you don't go to Anfield to defend, especially at a time where they've got two of their best midfield players playing at centre-half and they haven't scored in the last two games.

"I wanted to see them have a go at Liverpool because they were there for the taking. This was an opportunity for Manchester United to go there and show what they were all about, but they just sat deep and it disappoints me."

Solskjaer admitted he was unhappy with his side's first-half display and it was certainly not an enterprising one.

United had just one shot in the first half, a Bruno Fernandes free-kick that went narrowly wide, while Liverpool attempted nine. It was the first time since December 2019 that the Red Devils failed to hit the target before the interval in a league game.

Part of the problem, Solskjaer said, was an eagerness to release striker Rashford at the wrong moments. The England international was caught offside four times in the first half, more than he ever had in a complete league game before.

Still, the leaders were a little more adventurous after the break. They had seven shots to Liverpool's eight and finished the game with four on target, one more than the home side, with Pogba's chance the best of the contest. The expected goals tally for each side was a little over one. 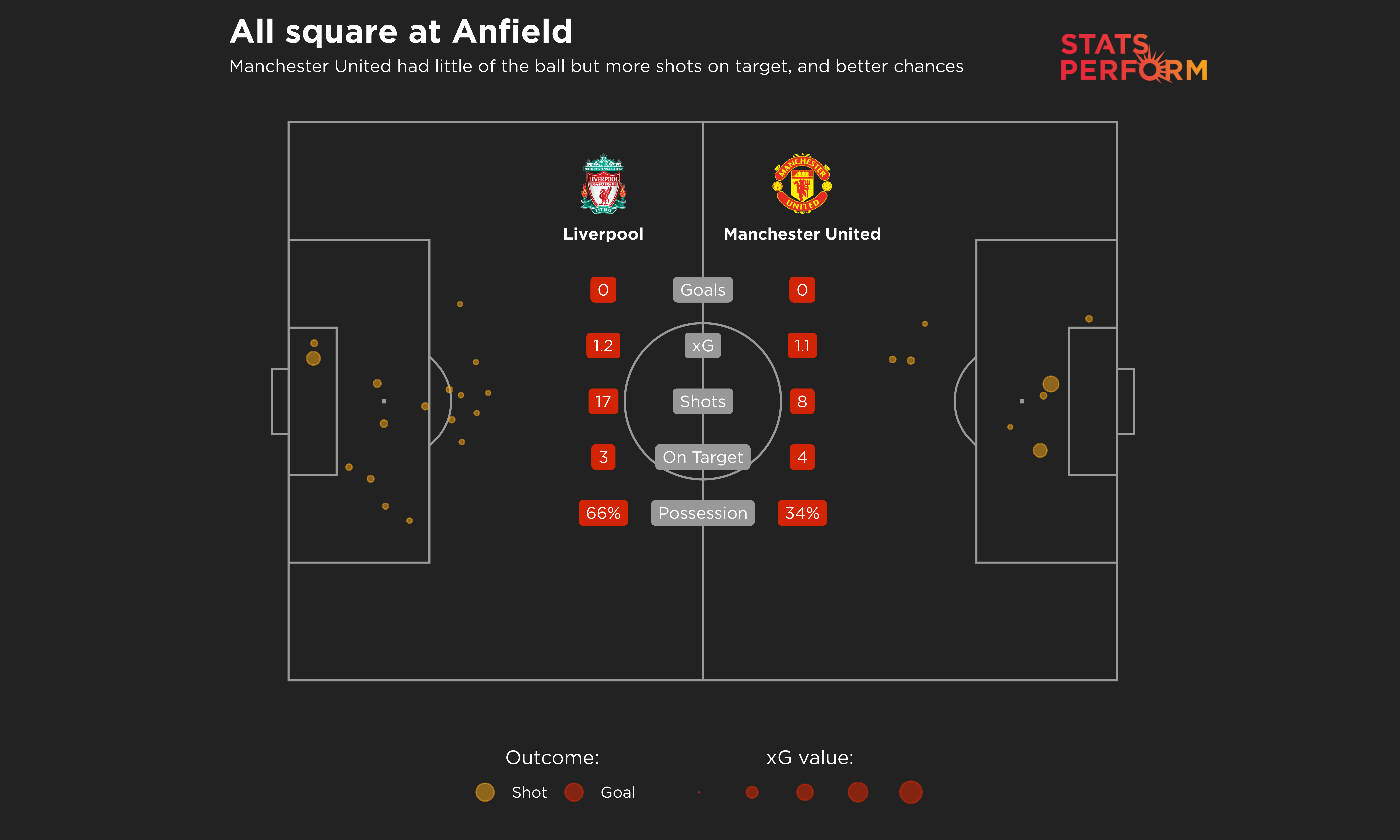 Ince's frustration seemed to be that United were no better on Sunday than they were in December 2018, when a one-sided 3-1 defeat at Anfield spelled the end of Mourinho's time in charge.

They were certainly happy to give up the ball. United ended this most recent game with 34 per cent of the possession, their lowest figure in a league game at Anfield under Solskjaer and both slightly down from Mourinho's final visit.

And yet, United had a far greater degree of control on the game than in their previous two trips to their bitter rivals.

Their shot count was done by just one on last season's game, which ended 2-0 to Liverpool, and was higher than in any of their visits to Anfield under Mourinho. Similarly, they faced just one more Liverpool shot than last term and a whopping 19 fewer than they did in December 2018. That 3-1 loss also saw United make 41 clearances, eight more than they had to make on Sunday.

And while Mourinho's final game saw them attempt 59 passes into the final third – much higher than the 35 they managed this time – the majority of those were long balls aimed at alleviating pressure on the defence.

Indeed, United on Sunday attempted 22 passes into the Liverpool box, four more than they managed in Mourinho's last visit to Merseyside, highlighting a greater level of poise about their forward play.