Gabriel and Mohamed Elneny scored late on as Arsenal overcame more defensive sloppiness to take a 3-1 lead in their Europa League tie with Olympiacos. 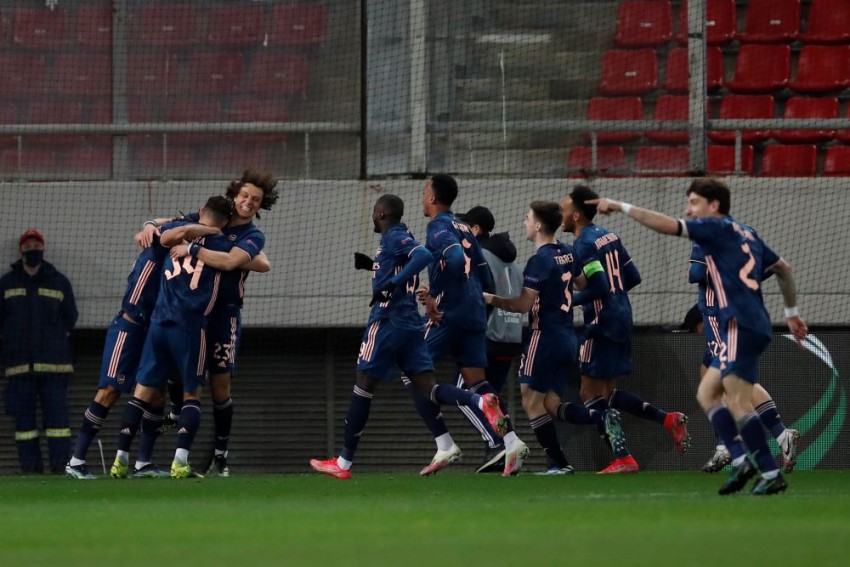 Arsenal's players celebrate after scoring their side third goal during the Europa League round of 16, first leg, match against Olympiacos at Georgios Karaiskakis stadium, in Piraeus port, near Athens on Thursday.
AP Photo/Thanassis Stavrakis
Stats Perform 2021-03-12T09:29:26+05:30 Olympiacos 1-3 Arsenal: Gabriel And Mohamed Elneny Strike Late To Give Mikel Arteta's Team The Edge 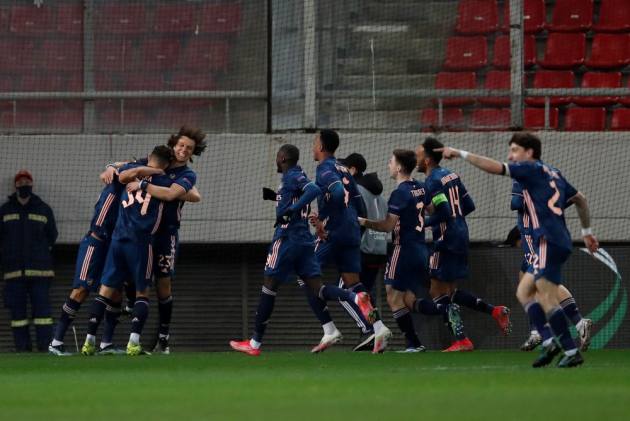 Gabriel and Mohamed Elneny scored late on as Arsenal atoned for defensive sloppiness to take a 3-1 lead in their Europa League last-16 tie with Olympiacos. (More Football News)

Having taken the lead through Martin Odegaard's stunning first goal for the club, Arsenal looked set to be the masters of their own downfall in Piraeus.

After surviving a David Luiz mistake late prior to half-time, the Gunners gifted Olympiacos an equalsier when Youssef El-Arabi robbed Dani Ceballos of possession.

Yet with El-Arabi, who scored the winner when Olympiacos knocked Arsenal out last season, squandering another gilt-edged chance, Gabriel headed in a second away goal to give the Gunners the edge before Elneny's wicked strike put them in control ahead of the return leg.

7 - Willian has provided more assists in all competitions than any other Arsenal player this season, including all three of Gabriel's strikes for the Gunners. Connection. pic.twitter.com/Sl4VBaZY2J

Kieran Tierney's strike inspired Arsenal's comeback against Benfica at the same stadium on February 25, and the full-back should have had an assist to his name in the third minute of this game, but Odegaard dragged wide from his neat cut-back.

Pierre-Emerick Aubameyang's deflected header looked set to put Arsenal ahead three minutes later, only for Jose Sa to make a superb save onto the crossbar.

Odegaard more than made amends for his earlier miss when he struck in the 34th minute, slamming a powerful, left-footed shot beyond Sa from 30 yards.

Thomas Partey forced Sa into action shortly after the restart, before he was taken off for Ceballos, and that change quickly backfired.

El-Arabi could have taken his tally of goals against Arsenal to three when Lazar Randjelovic drilled in a cross, but he failed to divert it on target.

Olympiacos were made to pay – Gabriel rising high above Yann M'Vila to meet Willian's cross and send a looping header into the right-hand corner before Elneny's swerving strike clipped in off the woodwork to give Arsenal breathing space in the tie.

What does it mean? Gunners looking fired up

If Mikel Arteta can iron out Arsenal's defensive lapses, his team must be considered as one of the favourites to go far into the competition.

Given the state of play in the Premier League, winning this competition could well be Arsenal’s best route to Europe.

Odegaard off the mark

Odegaard seemed to be in for a frustrating night, based on his early miss, but the Real Madrid loanee proved his quality with that exceptional strike to open his Arsenal account.

In his 82 minutes on the field, Odegaard created a game-high four chances, and had four attempts – more than any other player – while registering an impressive passing accuracy of 90.5 per cent.

An unhappy hunting ground for Ceballos

Ceballos made a dismal mistake which almost cost Arsenal against Benfica in Greece two weeks ago, and within three minutes of his introduction at Georgios Karaiskakis Stadium, he was largely responsible for Olympiacos' equaliser.

Leno’s pass was a poor one, but Ceballos was unaware of the danger around him and El-Arabi took advantage. Ceballos has now made two errors leading to a goal in the Europa League this season, and no player has made more.

- Arsenal have won eight of their nine Europa League games this season (D1) and are the highest scorers in the competition so far (27 goals).

- Having won their first three home meetings with Arsenal in all competitions, Olympiacos have now lost their last three against the Gunners at home.

- Willian has provided more assists for Arsenal in all competitions than any other player this season (7), including setting up all three of Gabriel's goal.

- All four of Elneny's goals for Arsenal have come in European competition (one in the Champions League, three in the Europa League), with three of those coming from outside the box.

- With Odegaard’s first-half strike getting him off the mark, Arsenal have now had 14 different goalscorers in the Europa League this season, more than any other side.

- El-Arabi has scored in his last two Europa League games against Arsenal, with those two goals accounting for 50 per cent of his total in the competition.

There is the small task of a north London derby clash with Tottenham coming up for Arsenal on Sunday, while Olympiacos take on Larissa on the same day.