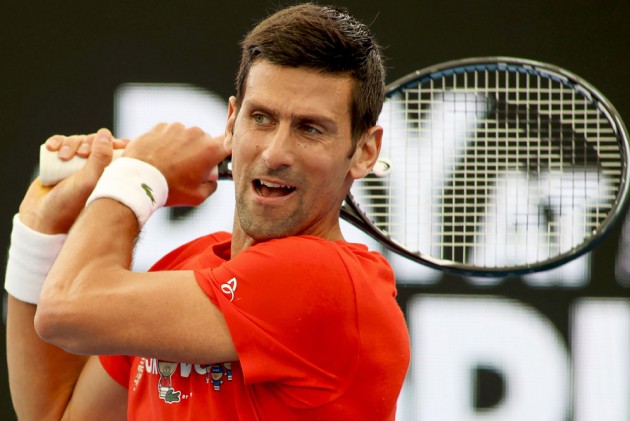 Novak Djokovic said he has been speaking to top female tennis pros, including Serena Williams, about the players' association that he and Vasek Pospisil founded in the hopes of gaining "more access and more transparency" — and a larger cut of the sport's revenues. (More Tennis News)

"You start to realize that the players are not represented in the way that they deserve and in the way they should be," Djokovic said during a video conference to discuss the Professional Tennis Players Association (PTPA) on Friday night, three days before the start of Wimbledon, where he will be seeking a 20th Grand Slam title.

"I feel like many players are figuring out," Djokovic added, "that we need to do something more than just trying to be satisfied with the little information that we are getting."

Tennis players are not represented by a union the way athletes in North American team sports are; instead, each player is considered an independent contractor.

"Tennis is far behind, I think. We're in 2021 and this is just ... a fundamental need for our sport in the world that we live in," Pospisil said. "There are a lot of very, very, I would say, unhappy players, and players that are struggling, and I don't think that needs to be the case."

The No. 1-ranked Djokovic and Pospisil, who won the 2014 Wimbledon men's doubles title and is currently No. 66 in singles, launched the PTPA around the time of last year's U.S. Open in August.

The group announced this week it appointed an executive director, Adam Larry, and an advisory board; it also received public support from the players’ associations for the NBA, NHL and Major League Baseball.

The ATP released a statement Wednesday criticizing the effort to create what it called "a separate player entity," saying such an effort "provides a clear overlap, divides the players, and further fragments the sport."

Djokovic, Pospisil and Larry all spoke Friday about trying to work with the ATP.

"At some point, I think, they'll realize when we have this many players that it's important to collaborate with us. And at some point, if we reach a dead end, obviously we’ll have to figure out the next play, the next strategy," Pospisil said.

"But we're pretty confident that they’ll begin communicating with us shortly."

Larry said the group has "hundreds of players" who are members, including more than 70% of the ATP men’s tour, but declined to say how many from the WTA women’s tour already are involved.

Djokovic said he discussed the PTPA with Williams, a 23-time Grand Slam champion, during the French Open, which ended two weeks ago.

"And I'm planning to talk with her again here in London," along with her husband, Reddit co-founder Alexis Ohanian, "a disruptor and very successful entrepreneur who has some ideas that he would like to share with us," Djokovic said.

Djokovic used to be the president, and Pospisil a member, of the ATP Player Council.