Zlatan Ibrahimovic's absence was felt as Milan's Serie A title hopes took another blow as Franck Kessie had to salvage a 1-1 draw against Udinese. 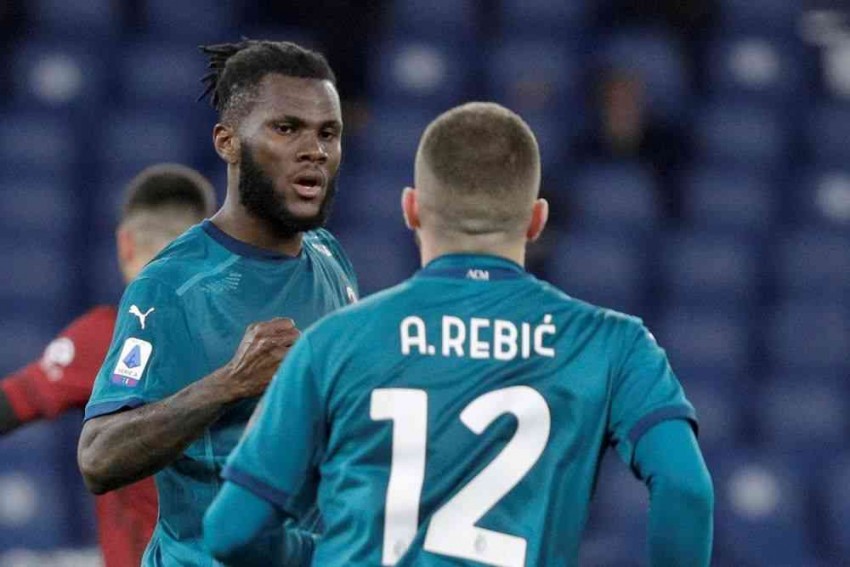 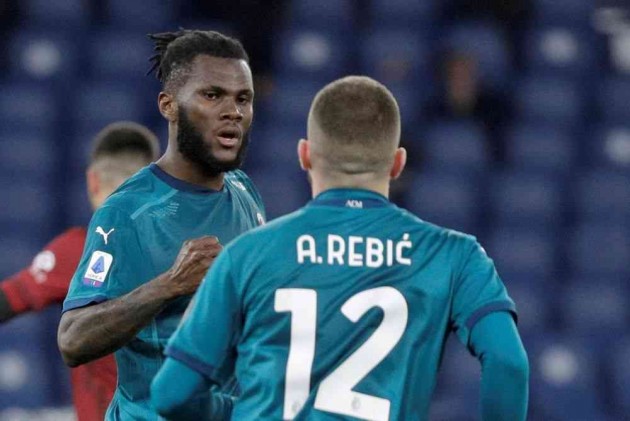 Franck Kessie's penalty salvaged a last-gasp point for Milan against Udinese at San Siro but Zlatan Ibrahimovic's absence was felt as the Rossoneri's title hopes took another blow in a 1-1 draw. (More Football News)

Leading scorer Ibrahimovic is set to miss up to three weeks with a thigh injury and on Wednesday's evidence Milan could struggle to cope.

With leaders Inter in action on Thursday, Milan would have moved to within a point of their city rivals with a victory, yet a mistake from Gianluigi Donnarumma looked set to cost them.

Rodrigo Becao's 68th-minute header found its way past the Italy goalkeeper, but Jens Stryger Larsen's inexplicable handball enabled Kessie to rescue a point from the penalty spot with the last kick of the game.

Draw at the San Siro

Milan had well over 70 per cent possession in the opening 20 minutes, but Brahim Diaz's hopeful effort, saved by Juan Musso, was all they had to show for their dominance.

Musso had tougher work to do before the break – Udinese's goalkeeper sticking out a leg to deny Samu Castillejo after he had kept out Rafael Leao's flick.

Alessio Romagnoli came to Milan's rescue after the restart, brilliantly clearing Ilija Nestorovski's header off the line after Theo Hernandez had gifted Roberto Pereyra possession in the hosts' area.

Soualiho Meite forced Musso into another smart stop soon after, with Franck Kessie seeing a goalbound header saved from the resulting corner.

Rodrigo de Paul almost benefitted from another Hernandez error with 25 minutes remaining, but Udinese did not have to wait much longer to break the deadlock.

De Paul played his part, delivering a corner that was met by Becao and, seemingly put off by Nestorovski's run, Donnarumma allowed the defender's header to creep in.

Udinese seemed to be seeing out the win with relative ease until, in the closing seconds, Stryger Larsen flapped a hand at a cross, and Kessie thumped in the penalty to at least keep Inter in touching distance.

What does it mean? Milan missing the Z-factor

Ibrahimovic has become embroiled in an argument with NBA star LeBron James over the last few days, but while trouble seems to follow the 39-year-old, there is no doubting his talismanic power to Milan's hopes.

He is already set to miss next week's Europa League trip to Old Trafford to face his former club Manchester United, and Milan must learn to win without the veteran campaigner if they are to restart their title charge.

Becao back to haunt Milan but Kessie keeps his cool

Centre-back Becao has only scored twice in Serie A, and both of those goals have come against Milan and Donnarumma – the other in a 1-0 Udinese victory at the start of last season.

Donnarumma's blushes were at least spared by the composure of Kessie, who has now scored nine league goals this term, with eight of them coming from the spot. Timed at 96:20, it was the Rossoneri's latest Serie A goal scored since Cristian Zapata netted against Inter in April 2017 (96:36).

It is easy to forget that Donnarumma has just turned 22, such is his vast amount of experience already. However, while his Udinese counterpart Musso thrived – making six saves – Milan's shot-stopper made a huge error at a vital moment.

He was not helped by a flailing attack, especially Ante Rebic. In the second half of this season, only Romelu Lukaku (six) has scored more times in Serie A than the Croatia forward, but the former Eintracht Frankfurt man was largely anonymous, failing to register an attempt or create a chance.

- Kessie has scored his 25 Serie A goals for Milan, equalling Robinho for the Rossoneri in the competition.
- The midfielder is the first Milan player to have scored at least eight penalty goals in a single Serie A campaign since Jeremy Menez in 2014-15.
- Milan have drawn a Serie A game for the first time since doing so against Genoa in December, 12 matches ago.
- Udinese have scored the fewest Serie A goals in the first half of matches this season (nine).
- Milan's Hernandez had 112 touches, his joint-best tally in a single Serie A game.

Hellas Verona host Milan on Sunday, with the Rossoneri then facing United in the Europa League. Udinese are at home against Sassuolo on Saturday.