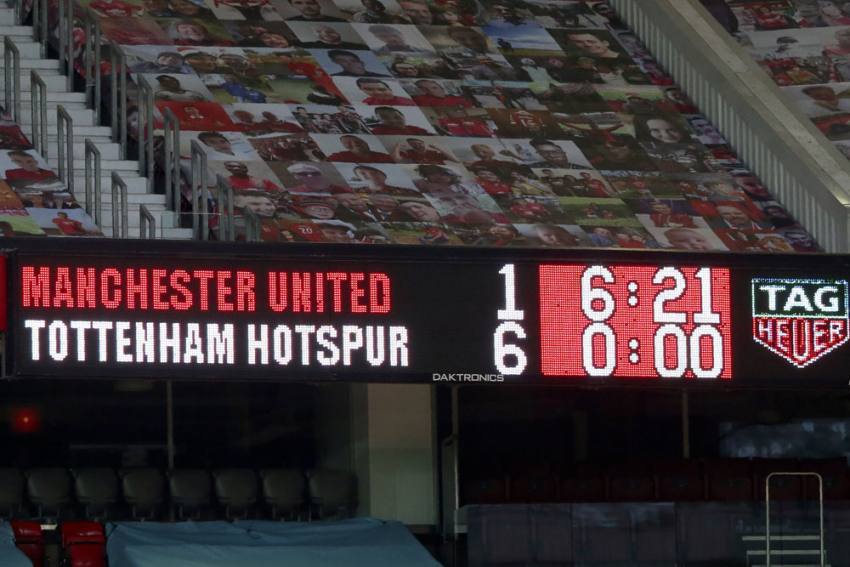 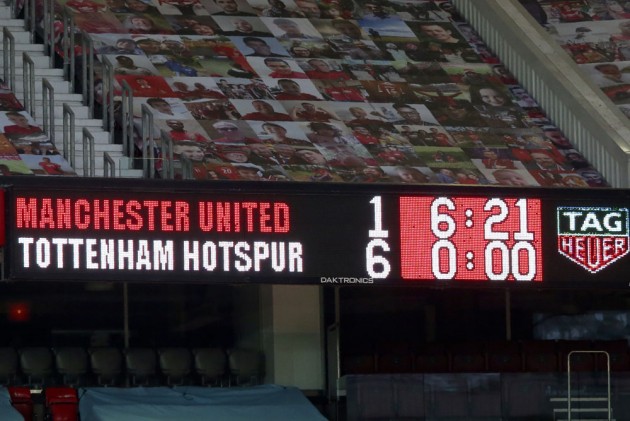 The woeful Red Devils conceded four home first-half goals in the Premier League for the first time having taken a second-minute lead through Bruno Fernandes' penalty.

Tanguy Ndombele levelled before Kane brilliantly set up Son to put Tottenham ahead before the favour was returned shortly after Anthony Martial was sent off, the Frenchman retaliating by striking Erik Lamela in the face after he appeared to be caught by a straw arm himself.

Son had a deserved second prior to the break, before the brilliant Serge Aurier added a fifth and Kane's late penalty meant the scoreline matched United's 6-1 defeat to rivals Manchester City in October 2011 and completed a joy-of-six return for ex-Red Devils boss Jose Mourinho.

4 - Tottenham are the first visiting side to score four first half goals in a league game away at Manchester United since Spurs themselves also did so in November 1957 in a 4-3 win. Repeat. #MUNTOT pic.twitter.com/lToOvp7U1E

Fernandes rolling in the early spot-kick after Davinson Sanchez clumsily chopped down Martial was as good as it got for United.

Martial's red card for raising a hand to the face of Lamela preceded more abject defending, with Bailly picked off by Kane before the England striker stroked home Son's return pass.

Remarkably it was 4-1 when Son got the run on Bailly to prod in Aurier's low centre before the break.

Aurier then drilled in Spurs' fifth after collecting Pierre-Emile Hojbjerg's exquisite throughball at the end of a fine team move.

Paul Pogba, who failed to track Aurier for the fifth, completed a miserable outing by crudely bringing down Ben Davies, allowing Kane to lash home his second from the spot.

What does it mean? United need reinforcements, but is it too late?

It was evident well before this game that United needed to add bodies, with only Donny van de Beek signed thus far, but with the window closing on Monday time is in extremely short supply.

A lengthy pursuit of Jadon Sancho has not come off and rumours Alex Telles and Edinson Cavani are close to signing really could do with coming to fruition. A new centre-back would not go amiss either.

Mourinho's first return to Old Trafford as Spurs boss ended in a 2-1 defeat last December but his superstar forwards meant it was a much happier occasion for the Portuguese this time.

Kane and Son have now combined for 26 Premier League goals, the fifth-most of any duo in the competition's history and the most of any current pairing. At times they were unplayable.

United's defence all at sea

For as good as Kane and Son were, United's centre-backs of Maguire and Bailly were equally poor but full-backs Aaron Wan-Bissaka and Luke Shaw were just as culpable.

The mind-boggling defending for the first was only the tip of the iceberg, with Wan-Bissaka and Maguire caught out for Spurs' second. Bailly cheaply gave away the third and Shaw – who squandered possession 16 times - was absolutely nowhere for the fourth.

Spurs will look to continue their momentum at home to West Ham after the international break, while Solskjaer's men have to quickly lick their wounds ahead of a trip to Newcastle United.