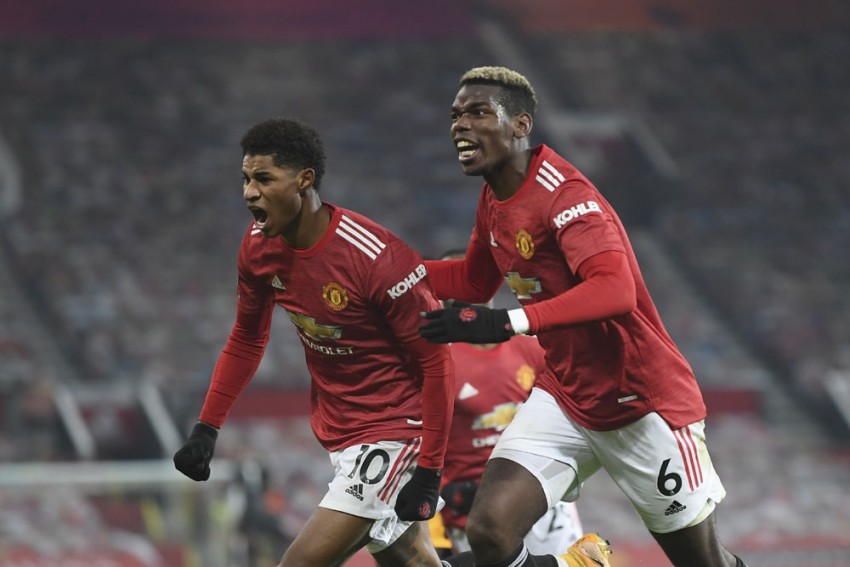 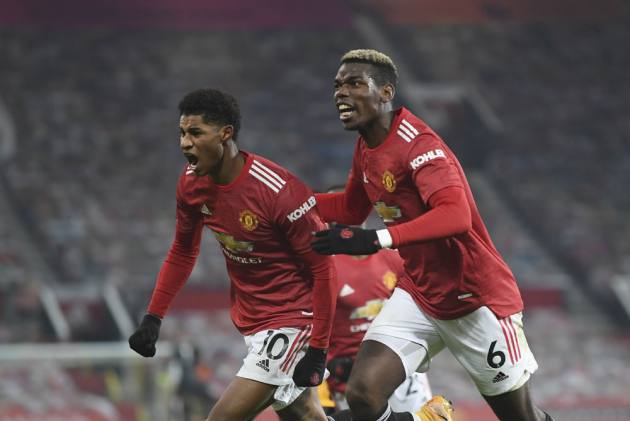 Marcus Rashford scored in second-half stoppage time to earn Manchester United a 1-0 win over Wolves and send the Red Devils up to second in the Premier League. (More Football News)

In the 93rd minute of a turgid game with few clear chances for either side, the two stars of United's season combined to produce a goal that took their tally to 10 points from their past four games at Old Trafford and ended 2020 on a high.

Wolves failed to capitalise on United's flat display, prioritising their own low block to stifle the threat of fast breaks that brought Ole Gunnar Solskjaer's men six goals against Leeds United in their previous home game, and defender Romain Saiss was the visitors' most potent attacking force.

But they slipped up late on when they failed to track Rashford's run onto a brilliant Bruno Fernandes pass and the England international's deflected goal extended his side's unbeaten run to nine league matches.

Saiss looped a header onto the top of the crossbar as Wolves threatened from a 22nd-minute free-kick, and United went close to opening the scoring when Fernandes' close-range volley was saved by the legs of Rui Patricio after 34 minutes.

David de Gea kept the scores level at the end of a difficult first half for the hosts, the United goalkeeper making a crucial save with his fists to block Saiss' near-post flick.

Edinson Cavani had the ball in the net after 68 minutes when he swept home Eric Bailly's knock-down following a corner but the effort was ruled out for offside.

A rare glimmer of brilliance from Paul Pogba forced Rui Patricio into a diving save from a raking 25-yard drive, before De Gea superbly staved off the threat of a Wolves winner by getting down quickly to parry Rayan Ait-Nouri's low angled shot away.

Just as it looked as though Wolves would run down the clock, Fernandes released Rashford with a 40-yard pass that was dispatched into the bottom-right corner – a touch off Saiss wrongfooting Rui Patricio.

What does it mean? Second place flatters tepid United

The win extends United's excellent run of results, but at the end of a year in which football's entertainment value has never been more important, this was a game to forget.

It took the Red Devils until the 34th minute to force a save from Patricio through Fernandes and they ended the game with just three shots on target. Such displays make it hard to see them as genuine title contenders, but their form suggests otherwise. They are now two points behind league leaders Liverpool.

Even when United are flat, Fernandes remains in form and he provided three key passes, including the assist, and attempted three shots – the joint-most alongside Rashford.

Mason Greenwood created two chances before being substituted in the 64th minute, but the United forward was largely anonymous and failed to provide his side with an effective option on the right wing.

845 - Marcus Rashford’s goal for Manchester United was his first at Old Trafford in the Premier League in 845 minutes of play, since last netting in July versus Southampton. Gasp. pic.twitter.com/KykYmYGk3u

- Rashford's winner (92:51) was United's latest winning goal in a Premier League game at Old Trafford since September 2009, when Michael Owen scored at 95:27 against Manchester City.
- Wolves have now conceded in each of their past nine games in the Premier League; their joint-longest run without a clean sheet in the competition under Nuno Espirito Santo (also nine games between December 2019 and January 2020.
- Since his Premier League debut in February, Fernandes has been directly involved in more goals in the competition than any other player (32 – 18 goals, 14 assists).

United are at home again on New Year's Day when Aston Villa are the visitors to Old Trafford, and Wolves' first game of 2021 comes a day later at Brighton and Hove Albion.