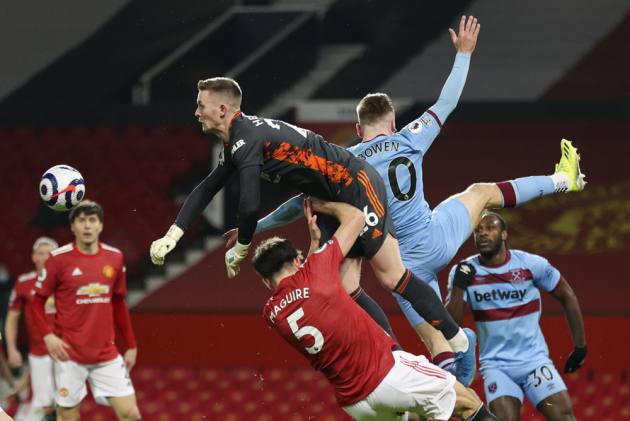 Manchester United battled to a 1-0 win over West Ham on Sunday to move back into second place in the Premier League. (More Football News)

A second-half own goal from Craig Dawson proved to be the difference as Old Trafford as David Moyes suffered a third defeat in three meetings with his old club this season.

They were three hard-won points for the Red Devils, who now have a more comfortable cushion to the Hammers in fifth, as they completed a league double over West Ham for the first time since Moyes' days in charge in 2013-14.

Marcus Rashford, a surprising starter after recovering from an ankle problem, should have scored 25 minutes in but failed to make clean contact with a header from Mason Greenwood's cross.

It was 37 minutes in until the first effort on target, Greenwood curling a strike towards the bottom-left corner that was expertly tipped away by Lukasz Fabianski, with the Hammers becoming the first team since Swansea City in March 2018 to fail to attempt a shot in the first half of a league game against the Red Devils.

The breakthrough came eight minutes into the second half, the ball flying past Fabianski off the head of Dawson after Scott McTominay had flicked on Bruno Fernandes' corner.

Fabianski made another fine one-handed stop to keep out a Fernandes strike from the edge of the box, and Greenwood blasted a shot off the base of the post after a fast break when the goalkeeper was beaten.

Ole Gunnar Solskjaer's men conceded a 92nd-minute equaliser to Milan in their last game, but this time they held firm in the closing stages.

What does it mean? United edge back into second

The win moved United back above Leicester City, who had earlier thrashed Sheffield United 5-0, and also means they are nine points clear of West Ham.

With nine games to go, the 14-point gap to leaders Manchester City appears too great, but Solskjaer's men are in a good position for what is proving a fiercely contested battle for the top four.

When West Ham at last made some concerted attacking moves in the second half, United captain Harry Maguire was resolute against Michail Antonio and Tomas Soucek.

He made a team-high seven clearances, won back the ball eight times and made a fine block to deny a fierce Jarrod Bowen strike.

This was the fifth time in the past six games in all competitions that United failed to score in the first half, the exception being that early Fernandes penalty in the derby win at City.

Breaking down defences is something of a recurring problem for Solskjaer and it could be a concern when they head to Milan on Thursday needing to score a goal to prevent a European exit.

0 - Tonight was the first time since February 2012 against Liverpool that Manchester United didn't make a single substitution in a Premier League match. Unusual. pic.twitter.com/Tzo5MCT0KZ

- Manchester United have only lost one of their past 23 Premier League games (W14 D8), this after suffering three defeats in their opening six games of the season.
- West Ham have lost 50 per cent of their 12 Premier League games this season against sides starting the day above them in the league (W4 D2 L6), compared to just seven per cent of their other 15 matches (W10 D4 L1).
- United have kept four straight clean sheets in the Premier League for the first time under Ole Gunnar Solskjaer, last doing so in January 2018 when Jose Mourinho was at the helm.
- Only Harry Redknapp (15) has managed more away Premier League games at Old Trafford without winning than West Ham boss David Moyes (D4 L10), with this defeat his 14th such trip in the top flight (11 with Everton, one with Sunderland, two with West Ham).
- United's opener was only Craig Dawson's second own goal in the Premier League, also turning into his own net in April 2016 for West Brom against Tottenham.
- West Ham failed to attempt a single shot on target despite managing seven attempts, the highest number of shots the Hammers have had in a Premier League game without any hitting the target since August 2013 vs Stoke City (nine shots).

United's final two games before the international break are a Europa League trip to Milan on Thursday and an FA Cup quarter-final at Leicester City next Sunday. West Ham have a week to prepare for the league visit of Arsenal.