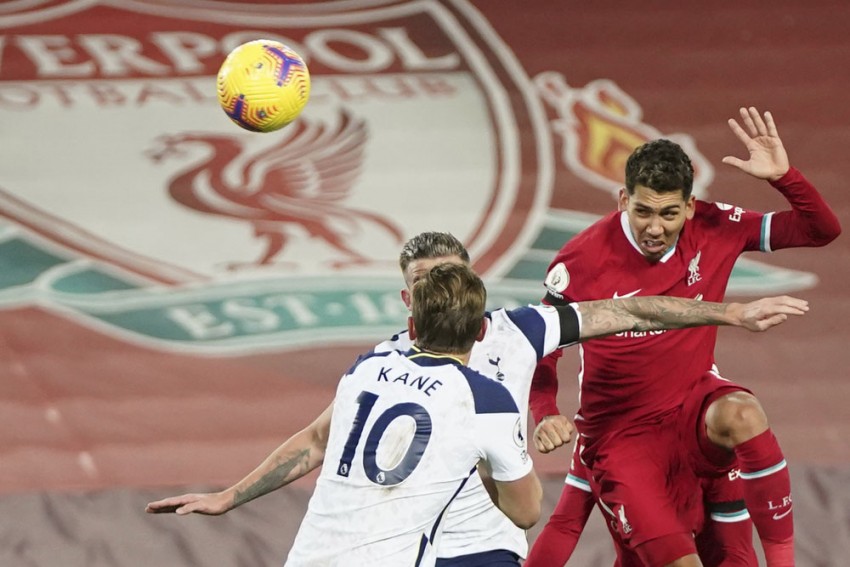 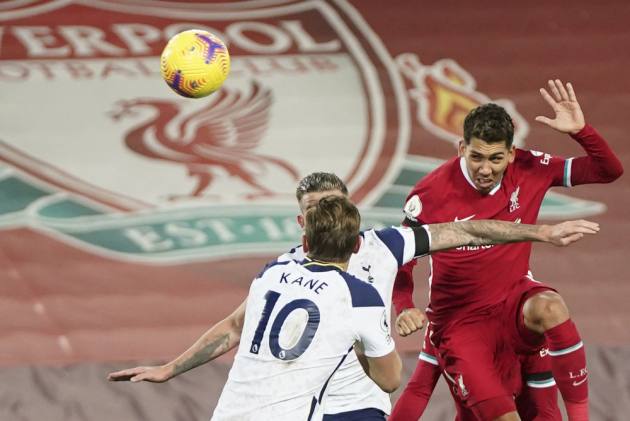 Son Heung-min's contentious first-half equaliser looked to have kept Spurs at the summit on goal difference after Mohamed Salah's 14th goal of the season put the champions in front.

Firmino rose to head home Andy Robertson's corner in the 90th minute to dramatically win it, though, and put the Reds three points clear of Jose Mourinho's side.

Spurs felt Firmino's goal should have been ruled out for a foul by Jordan Henderson on Eric Dier when Robertson's delivery came in, but Spurs' 11-match unbeaten run in the top flight came to a halt.

Both teams struck the woodwork through Steven Bergwijn and Sadio Mane in the second half before Firmino won it.

Salah shot straight at Lloris after the ball struck Dier on the arm in the penalty area but no spot-kick was awarded before the Egypt forward opened the scoring with a shot that deflected in off Toby Alderweireld after 26 minutes.

The Reds were dominant but Spurs levelled against the run of play seven minutes later, Son taking Giovani Lo Celso's pass and finishing clinically, then breathing a sigh of relief after the goal was awarded following a VAR check.

Bergwijn missed a great chance to put Spurs in front just after the break, shooting wide of the far post following a lapse from teenage defender Rhys Williams - making his Premier League debut.

Alisson spared his own blushes when he tipped away Harry Kane's attempted lob after the Spurs captain intercepted his sloppy pass in a bright start to the second half from the London club.

Bergwijn's measured shot struck the post after Son nodded on to put the Netherlands international clear and Kane headed over the crossbar when he ought to have scored from close range.

Liverpool almost responded when Mane turned sharply and saw his deflected left-foot strike hit the top of the bar, but Firmino secured all three points with a bullet header and Spurs’ protests were waved away as they lost top spot.

What does it mean? Spurs pay the price at fortress Anfield

Liverpool have now won seven out of seven in the Premier League at Anfield, where they are unbeaten in 66 top-flight matches.

Despite being without a host of key players, the Reds are looking ominous and were much more like the team that stormed to the title last season after not being at their best in a draw at Fulham last weekend.

Spurs felt aggrieved by Firmino's winner, but if they had taken at least one of the great chances they created in the second half their long unbeaten run in the Premier League would not have come to an end.

Teenage midfielder Curtis Jones was outstanding for the Reds in the middle of the park.

The 19-year-old was intelligent with his movement off the ball, drifting into space and brimming with confidence on the ball, finding his man with all but seven of his 113 passes.

He made a game-high 87 of those passes in the Spurs half, also having three shots and winning 80 per cent of his aerial duals.

It was not the Netherlands international's night, as he did not provide a single key pass and also and his only cross did not find the intended target.

- Tottenham have won just one of their last 27 Premier League away games against Liverpool (D8 L18), last winning there in May 2011 under Harry Redknapp.
- Only versus Chelsea (102) have Spurs conceded more Premier League goals than they have against Liverpool (97).
- Mourinho has never won away against Klopp in six attempts in all competitions (D2 L4), with Klopp being the manager he has faced the most away from home without ever tasting victory.
- Son has scored 11 goals in 13 Premier League appearances this season, equalling his goal tally from the entire 2019-20 campaign (11 in 30).
- Salah now has eight goals against Tottenham in all competitions - against no other side has he scored more in his club career in European football (level with Bournemouth and Watford).

The champions will have a spring in their step when they head to the capital to face Crystal Palace on Saturday, while Spurs are home to Leicester City the following day.