Roberto Firmino and Diogo Jota were on target for Liverpool, who had fallen behind to a Sander Berge penalty 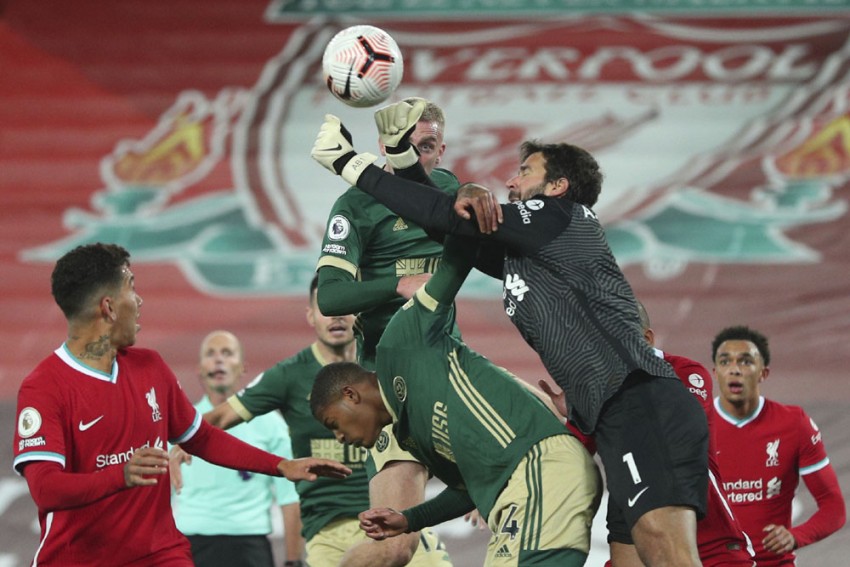 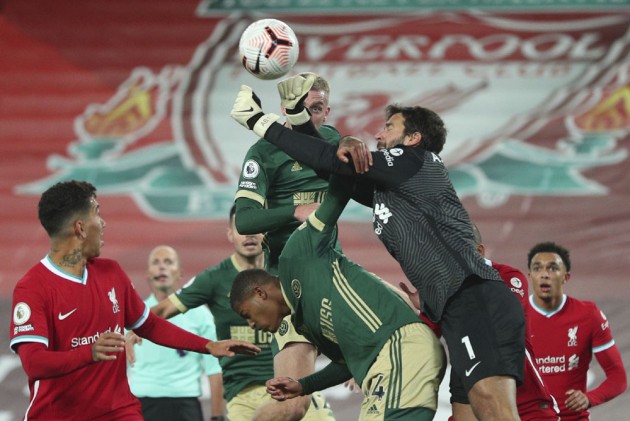 A controversial draw with Everton last time out followed a 7-2 humiliation at the hands of Aston Villa before the international break and Jurgen Klopp's side looked set for more disappointment when a Sander Berge penalty put the Blades ahead after 13 minutes.

Robert Firmino's first of the season drew them level ahead of the interval, though, before Jota sealed all three points in the 64th minute with his second goal for the club following his move from Wolves last month.

The result moved Liverpool up to second, level on points with leaders Everton, while Chris Wilder's side - who have failed to win so far this season - remained in 19th.

Liverpool almost went ahead inside the opening five minutes but Aaron Ramsdale backtracked well to tip over Trent Alexander-Arnold's audacious free-kick from 45 yards.

The hosts then conceded their first penalty at Anfield in the Premier League since October 2018 when Fabinho was deemed to have brought down Oliver McBurnie just inside the area, with Berge stepping up to coolly slot past Alisson.

The Liverpool goalkeeper kept out Ben Osborn's powerful volley soon after as Wilder's side threatened to double their advantage.

It was the hosts who scored next, though, Firmino slotting home four minutes before the break after Ramsdale parried Sadio Mane's header.

George Baldock and Mohamed Salah exchanged half-chances at the start of the second period before the latter saw a fine effort ruled out for offside shortly after the hour mark.

The Reds' disappointment did not last long, however, with Jota superbly heading home Mane's left-wing cross to put the hosts ahead.

Salah clipped an effort against the post with 10 minutes remaining but it mattered little as Klopp's men ultimately held on with the minimum of fuss to extend their unbeaten Premier League run at Anfield to a whopping 62 games.

What does it mean? Reds made to sweat by plucky Blades

Liverpool avoided making it three Premier League games without a win for the first time since May 2018 but they did not have it all their own way against a spirited United, who had 13 shots on goal.

Without the injured Virgil van Dijk for the first time in 95 top-flight games, the Reds could easily have been 2-0 down before Firmino pounced late in the first half.

While they ultimately came through unscathed, there was enough vulnerability on show to suggest there will be some difficult tests ahead for Klopp's men.

The England international continued his mission to reinvent the role of a full-back with another display brimming with attacking intent. Alexander-Arnold made three key passes - more than any other player on the pitch - among a team-high of 96 passes. He did blot his copybook by losing possession 26 times but Klopp will forgive that after yet another impressive all-round display.

Rhian Brewster struggled to make an impact against the team he left earlier this month in a reported £23.5million deal. The 20-year-old failed to register a shot during his 54 minutes on the pitch and made just eight successful passes, comfortably the fewest of any United starter.

- Liverpool are unbeaten in their past 13 Premier League home games when conceding the first goal (W10 D3), winning each of the most recent nine in succession.
- Jota has scored in each of his first two Premier League home games for Liverpool, the first player to do so for the club since Sadio Mane in September 2016.
- The Blades are winless in nine Premier League games (D1 L8), the longest active run of any side in the competition.
- Jota’s 64th-minute headed goal was the only attempt on target in the second half, despite there being 17 shots in total between the two teams after half-time.

Liverpool will expect to follow up their opening Group D win over Ajax last week when they host Midtjylland in the Champions League on Tuesday. The Blades, meanwhile, welcome Manchester City to Bramall Lane in the Premier League on Saturday.