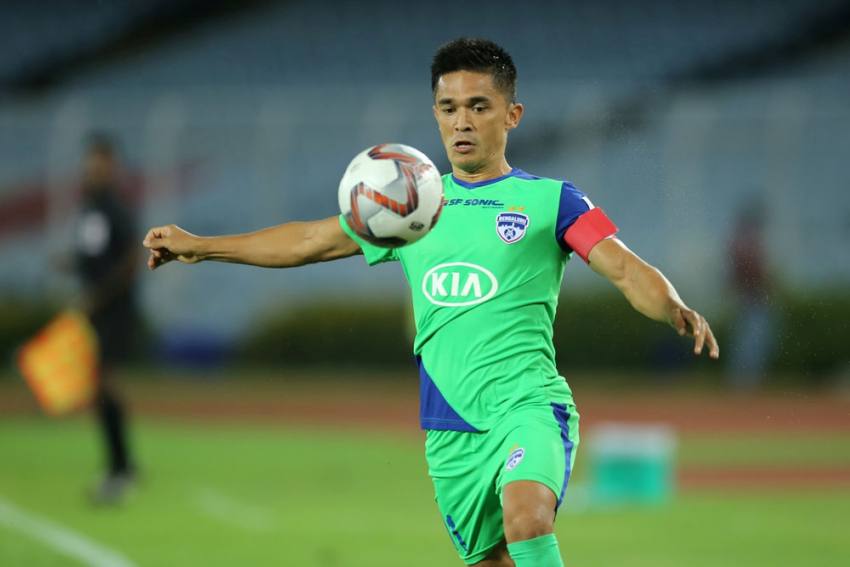 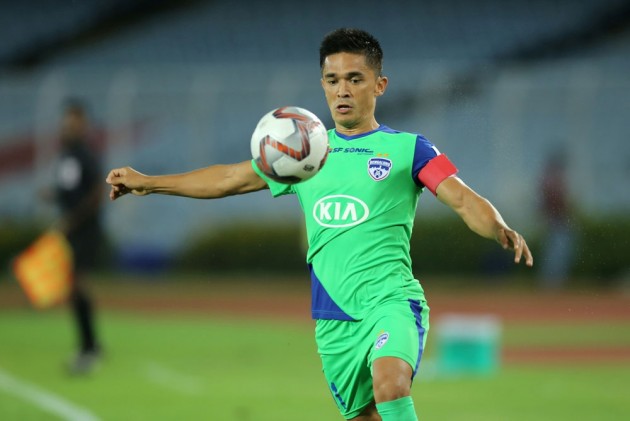 19:55 hrs IST: FT' The referee blows his whistle for fulltime, as Sunil Chhetri leads Bengaluru FC to a crucial victory against NorthEast United in their 2019-20 Indian Super League fixture at the Indira Gandhi Athletic Stadium.

19:48 hrs IST: 87:45' Bengaluru are spraying around passes and trying their best to consume time. Meanwhile, NorthEast United look tired and don't seem to be en route to a goal.

Serran increases Bengaluru's lead! Partaalu puts in a clever hanging cross into the far post from the left side. Serran runs in and heads it into the back of the net.

Oh, that just shaved past the goal line and it goes out for a goalkick. It was a shot from tight angle and was about to creep into the far-right corner.

19:36 hrs IST: 76:20' NorthEast have increased their tempo now, as they search for the crucial equaliser. Bengaluru need to be cautious!

The Bengaluru captain scores from the penalty spot comfortably, and for the second consecutive game. Its 0-1 for Bengaluru FC, as NorthEast United need to find an equaliser.

19:23 hrs IST: 62:47' Few Bengaluru substitutes are warming up right now, as Carles Cuadrat really needs to tweak his tactics. Eugenson could be a good introduction. They need someone to pull the strings.

19:17 hrs IST: 57:14' Bengaluru are pretty poor with their off and the on the ball movement tonight. NorthEast's sharpness and aggression seems to be getting the better of the defending champions.

19:05 hrs IST: And the referee blows his whistle for the second half, with Bengaluru FC aiming to improve against NorthEast United.

18:50 hrs IST: HT' The referee blows his whistle for halftime, as NorthEast United keep Bengaluru FC at bay with ease in the first half of their 2019-20 Indian Super League fixture at the Indira Gandhi Athletic Stadium, in Guwahati.

18:45 hrs IST: 44:21' CHAVESSS!! Oh, that was a good corner by Puitea, as it falls in a chaotic Bengaluru box, and Chaves' shot gets deflected for another corner.

18:43 hrs IST: 40:58' Bengaluru aren't being able to control the game, with NorthEast keeping the defending champions at their toes. The hosts are keeping a rigid approach, and are winning fouls, tackles.

18:29 hrs IST: 27:36' Nice little touch but a poor delivery by Rahul Bheke.It was a good build up by Bengaluru, with Bheke receiving a long ball in the right flank, but his delivery is way too poor and goes for a goalkick.

18:25 hrs IST: 23:10' NorthEast are creating better chances and are more adventurous with the ball. Bengaluru look a bit shaky with the front three poor.

A good effort by the big man, as Bengaluru build up well from the left flank, and it falls for Partaalu, who is outside the box. His shot goes way too high!

18:09 hrs IST: 07:10' Both teams are battling it out in midfield. Bengaluru are having more of the ball, but NorthEast are catching them at the counter. Complete end-to-end action here!

OH, THAT WAS A GOOD EFFORT BY THE YOUNGSTER!!

Chavez intercepts Bheke's back pass and passes it to Puitea, who shoots from distance, but it goes above the crossbar.

18:01 hrs IST: And we kick-off at the Indira Gandhi Athletic Stadium in Guwahati, as NorthEast United host Bengaluru FC in their 2019-20 Indian Super League fixture. Both teams lost their previous fixtures, and will be aiming to overturn their recent run of form.

17:55 hrs IST: Both teams are walking into the field now for the pre-match formalities.

17:53 hrs IST: The absence of Gyan means that Chavez will lead the frontline. The Uruguayan will need to bring up his top game, with the Highlanders needing a win after their previous defeat to ATK.

17:25 hrs IST: Robert Jarni will be expecting Redeem Tlnag to once more provide the spark for NorthEast United. Tlang has slowly become a leader in the team. Meanwhile, Carles Cuadrat will once again depend on Sunil Chhetri for a win, with Udanta Singh and Ashique Kuruniyan having failed to prove their mettle.

The Highlanders have already had their earlier home fixture against Chennaiyin FC postponed due to a curfew and protests in the town.

NorthEast United need to rebuild some momentum, after losing to ATK in their previous fixture. The hosts will once again be without star striker Asamoah Gyan, who has scored three goals this season. Meanwhile, Uruguayan midfielder Federico Gallego is back in the mix. He contributed four goals and as many assists last season until suffering an injury in the semifinals. Meanwhile, head coach Robert Jarni will be banking on Kai Heerings, to shore up the backline.

Ahead of the match, the Croatian gaffer said, "The game is difficult. We know that Bengaluru is one of the best teams in India but we saw that the game was open in Bengaluru. We had the possibility to win and the same for tomorrow, so who knows what will happen tomorrow (Wednesday)."

Meanwhile, Bengaluru FC also come to Guwahati after seeing their unbeaten run getting broken by FC Goa in their previous match. Head coach Carles Cuadrat will be worried about his attackers. Other than Sunil Chhetri, Ashique Kuruniyan and Udanta Singh have been poor.

Ahead of the match, he said, "Last year we were champions but we lost an important player (Miku). We have been unlucky about the situation now. Ashique is with 0 assists and 0 goals and Udanta only one goal."

"So, of course, we have problems that way but at the same time we work in a way where they help us defensively," he added.