Barcelona made it three wins from three in Champions League Group G with a hard-fought 2-1 victory over a depleted Dynamo Kiev. 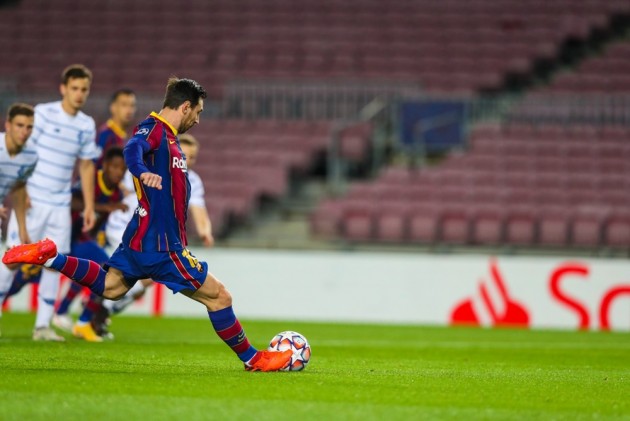 The superstar forward scored from the penalty spot for the third Group G game running and Gerard Pique added a second, but only after Barca had been given a number of scares.

Returning goalkeeper Marc-Andre ter Stegen produced a handful of top-class saves, the best of the lot to keep out Vitaliy Buyalskiy's free header in the first half, while Tomasz Kedziora had a goal ruled out.

Dynamo named a depleted squad due to a coronavirus outbreak in the camp and pushed their opponents all the way thanks to Viktor Tsygankov's strike 15 minutes from time, though Barca held on to make it nine points from nine.

Denys Popov tripped Messi in the box early on and the Argentina international tucked the spot-kick away from Ruslan Neshcheret into the bottom-right corner.

Pedri hit the underside of the crossbar after being picked out by Sergino Dest and Antoine Griezmann fired wide from six yards as Barca looked for a quickfire second.

Neshcheret was making only his second senior appearance and kept out a couple of efforts from Messi before half-time, either side of Ter Stegen's reaction stop to deny Buyalskiy.

Barcelona were given a couple of warnings early in the second period as Ter Stegen was equal to Tsygankov from a one-on-one and Kedziora's headed goal was chalked off as a corner had curled out of play.

Vladyslav Supriaha was the next to be thwarted by Ter Stegen, shortly before Neshcheret tipped over Messi's free-kick from the best of his saves in what was turning out to be a battle of the keepers.

ðÂÂÂÂÂÂ Gerard Pique has now scored career 15 @ChampionsLeague goals — tied for second all-time with @ivanhelguera1, and only behind @Oficial_RC3 (16). pic.twitter.com/ee2rhixQMs

Pique thought he had finally killed off Dynamo when guiding Ansu Fati's cross into the back of the net, only for Tsygankov to tap in at the other end after Benjamin Verbic's saved shot rolled into his path.

The visitors could not find a late leveller, though, with the Catalan giants managing the remainder of the game well to all but book a place in the last 16 of the competition.

This is a game that will very much be remembered for the performances of both keepers - Ter Stegen making six saves to Neshcheret's 11.

Indebted to Ter Stegen, Barca retain a three-point lead over Juventus - 4-1 winners over Ferencvaros in Budapest on Wednesday - while Dynamo are eight points worse off in third at the midway point.

Koeman's men may have made their joint-worst start to a LaLiga season since the competition shifted to three points for a win, but they have a perfect record in Europe and must now transfer that form into their flagging domestic campaign.

Barca have been shaky in Ter Stegen's absence this term, with stand-in Neto simply not having the same calming presence at the back, as highlighted by his error in the 1-1 draw with Alaves last time out.

The Wall. Is. Back. pic.twitter.com/YwWcTsOGPN

This display shows just why many rate the German as the best number one on the planet, and yet he was arguably not even the best goalkeeper on the pitch today - Neshcheret, aged just 18, claiming that honour on a day to remember.

Barcelona were given a real scare by Dynamo but it surely would have been an entirely different game had Griezmann converted his easy chance from six yards shortly after Messi's opener.

Despite being fielded through the middle, the France international struggled to get involved in the game, managing just 22 touches of the ball before being withdrawn after an hour - the fewest of any outfield player up to that point.

- Messi’s fifth-minute penalty was his earliest in any game for Barcelona, and the earliest spot-kick scored by a Barcelona player in Champions League history.

- Barcelona have started a Champions League season with three wins in their opening three games for the sixth time. Only once previously did they go on to win the trophy after such a start - in 2008/09 under Pep Guardiola.

- Neshcheret made 11 saves, the most by a goalkeeper on his Champions League debut since at least 2003/04.

Barcelona host Real Betis on Saturday in their final LaLiga outing before the international break, while Dynamo take on Shakhtar Donetsk in a top-of-the-table clash in the Ukrainian Premier League the following day.