Lille once again have PSG within striking distance after Kylian Mbappe impressed against Strasbourg. 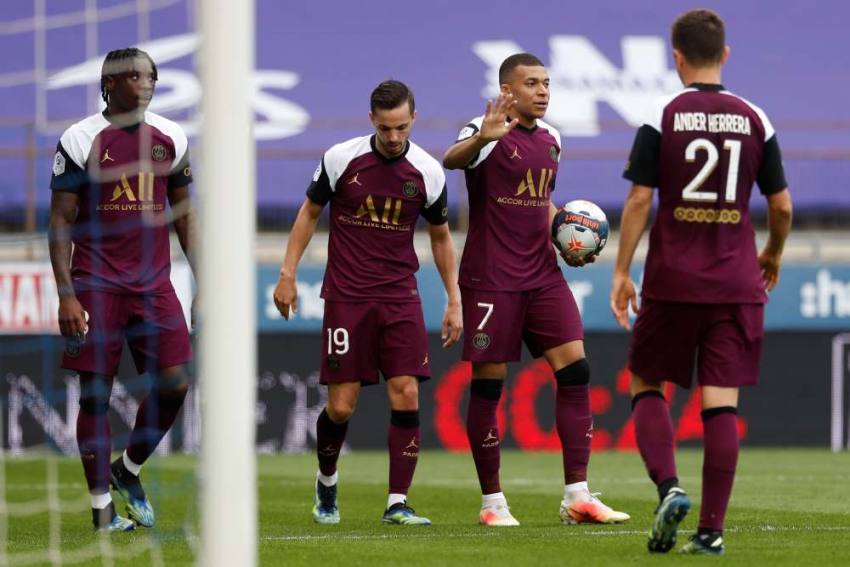 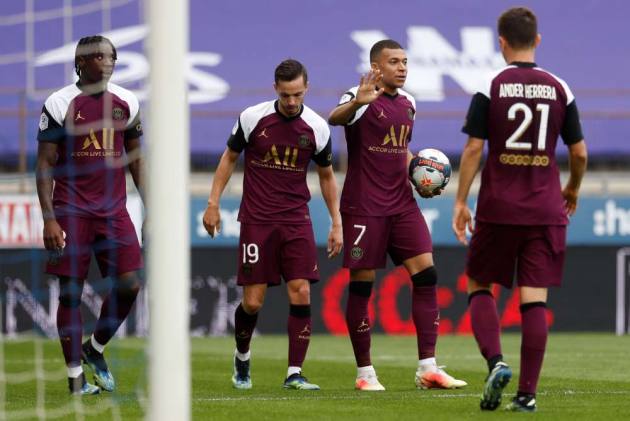 Kylian Mbappe was influential again as he scored one and set up another to help Paris Saint-Germain maintain the pressure on Ligue 1 leaders Lille with a commanding 4-1 win at Strasbourg. (More Football News)

A 1-0 defeat at home to the leaders coupled with Lille's 2-0 win over Metz left Mauricio Pochettino's men six points adrift heading into the match at Stade de la Meinau.

But Mbappe backed up a double in PSG's fine 3-2 first-leg triumph at Bayern Munich in their Champions League quarter-final tie with his 21st Ligue 1 goal of the season.

That preceded efforts from Pablo Sarabia – his third in four games – and Moise Kean before the break, with Dion Moise Sahi replying for the hosts prior to Leandro Paredes executing a fine free-kick to wrap up the points.

19 - Kylian Mbappé has both scored and delivered an assist in a same Ligue 1 game for the 19th time since his debuts with Paris in September 2017. Only Lionel Messi (21) has done this more times over the period in European top five leagues. Unstoppable. #RCSAPSG pic.twitter.com/J7OvKs8nYz

For all their domination of the ball, PSG were almost caught cold when Adrien Thomasson's 30-yard thunderbolt cannoned off the left post.

But PSG were ahead after 16 minutes when Mbappe showed Lamine Kone a clean pair of heels and drilled a left-foot shot through Matz Sels' legs from a tight angle.

The lead was doubled by Sarabia, who turned brilliantly after collecting Danilo Pereira's pass, shimmied past Kone and rolled coolly past Sels.

Kean made sure of the points before the break with a clinical finish from Mbappe's poked throughball.

The Everton loanee forced Sels into a save on the hour but it was Strasbourg who scored next, Sahi forcing his shot pass Sergio Rico – on for Keylor Navas at half-time – from Jean-Ricner Bellegarde's right-wing cross just 73 seconds after entering the fray.

Sanjin Prcic curled one just wide of the left post for Strasbourg, but Paredes picked out the right side of the goal from 30 yards to complete the win from a set-piece won by another marauding Mbappe run.

What does it mean? Rotation works for Poch

With this fixture sandwiched by the Bayern games, Pochettino made seven changes to his starting XI but the move paid dividends.

PSG's defeat to Lille marked the first time they had lost three straight home Ligue 1 matches since 2007 and their eight losses after 31 games in the top flight prior to this match represented the most at this stage of a campaign since 2009-10.

But a fifth straight away league win keeps the pressure on Lille and maintains the momentum ahead of the return fixture against Bayern.

Mbappe has hinted in recent weeks that a decision on his long-term future will be taken at the end of the season.

PSG will desperately hope their rapid forward decides to remain in the French capital after another sensational week that included the crucial brace against Bayern.

In Ligue 1 this term, he now has 13 goals and four assists away from home, while he has netted in four straight matches away from the Parc des Princes in the top flight.

Strasbourg threatened a couple of times but in general just did not consistently have the quality to compete.

Kone particularly struggled, being left behind by both Mbappe and Sarabia for PSG's first two goals.

- In winning their last five Ligue 1 away games, PSG have the longest ongoing run in the top-flight and their best since November 2019-February 2020 (6).
- PSG have scored 4+ goals in eight different Ligue 1 games this season, only Bayern (10) have done it more in 2020-21 among the European top five leagues.
- Mbappe has scored 19 goals in all competitions in 2021, only Robert Lewandowski (22 goals) is doing better since the beginning of the year. The PSG forward is the best Ligue 1 striker in this period (9 goals).
- Sarabia has found the net in each of his last three games started in Ligue 1. PSG have won each of their 10 games in the competition where the Spain international has scored a goal.
- Strasbourg have lost three of their last four Ligue 1 games (W1), after losing only two of their previous 11 games in the top-flight (W5 D4).

PSG will now try and attempt to complete the job in their Champions League quarter-final tie against Bayern Munich on Tuesday. Strasbourg visit strugglers Nimes a week on Sunday.

Parma 1-3 Milan: Rossoneri Made To Sweat After Zlatan Ibrahimovic Sent Off For Dissent In Serie A Clash