Liverpool can no longer break the Premier League points record, but Jurgen Klopp is unworried 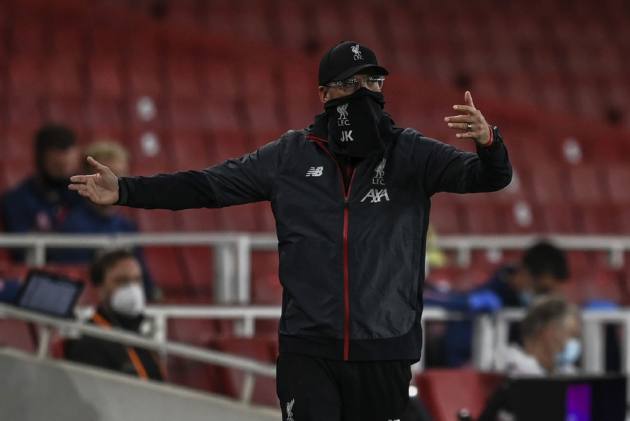 Jurgen Klopp insisted he was unfazed about Liverpool's chances of reaching 100 points in the Premier League being ended by Arsenal. (More Football News)

Liverpool fell to a 2-1 loss at Emirates Stadium on Wednesday, and the champions can get to a maximum of 99 points this season.

But Klopp said there was no sense of disappointment about not being able to get to 100 points, a record set by Manchester City in 2017-18.

"No, not yet at least, I don't know if it comes," the Liverpool manager told a news conference.

"But it's just I want the points we can get and we will see what it is at the end of the season.

"I cannot make any negative of something really positive, becoming champion, having so early in the season 93 points, I'm not the type of person who makes something negative of it because we cannot get the 100 or two points anymore.

"We get the points we deserve and we will see how many that will be. In the moment it's 93, two games to go, very difficult games, but two games to go and these boys played an exceptional season and nobody can take that away from them.

"But I'm not happy about the game, I'm the opposite, I'm disappointed, angry about a few things, but the game, the game was good and the attitude is good, but we took a break and that's not good and that's why we lost the game."

Liverpool led against Arsenal through Sadio Mane, only for mistakes from Virgil van Dijk and Alisson to see Alexandre Lacazette and Reiss Nelson score in the hosts' victory.

Klopp, whose team entertain Chelsea on July 22, said they were rare mistakes by two of his stars.

"Somebody is surprised that these boys are human beings, I'm not," he said.

"I see them every day, from time to time they are not perfect, but not really often. That's how it is."