KL Rahul smashed a rollicking 132 off 69 balls for Kings XI Punjab. This was a record by an Indian batsman in IPL 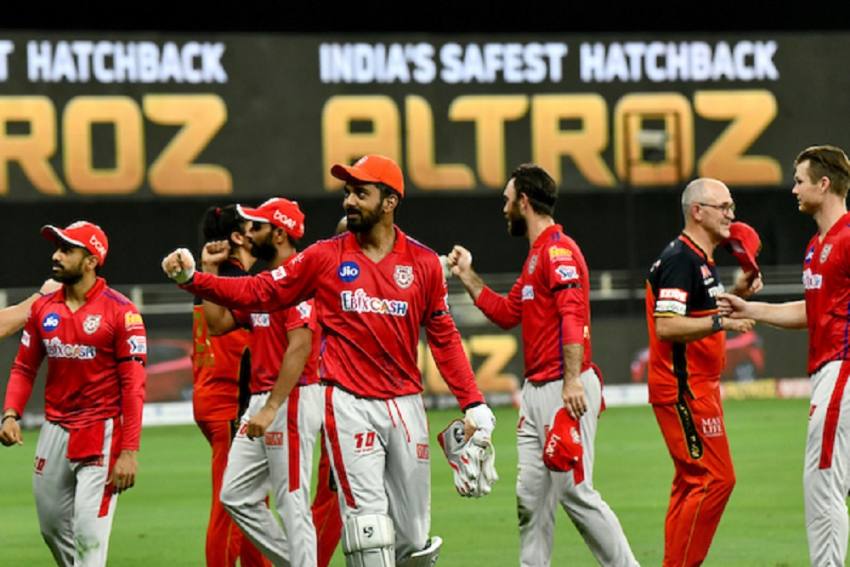 A happy KL Rahul after KXIP routed RCB in an IPL 2020 match in Dubai on Thursday.
BCCI Photo
Outlook Web Bureau September 25, 2020 00:00 IST IPL 2020: After Slew Of IPL Records, KL Rahul Says He 'Wasn't Feeling In Control' Of His Batting Ahead of RCB Clash 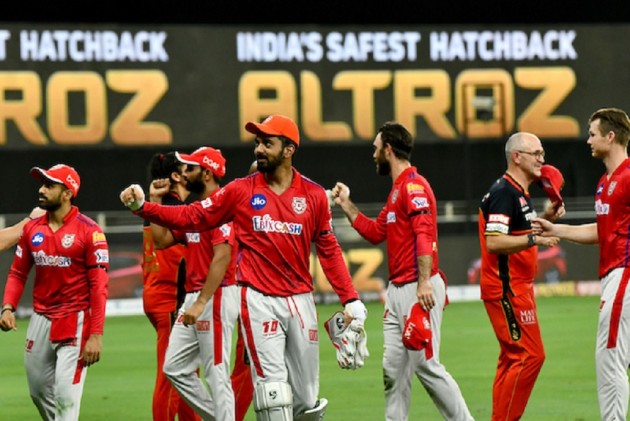 KL Rahul's scintillating century in Dubai on Thursday night helped Kings XI Punjab break a slew of IPL records but the KXIP captain said he didn't have the confidence to stroke the ball freely ahead of the crucial IPL 2020 clash against Royal Challengers Bangalore.

KXIP's 97-run win against RCB was the first of this IPL 2020 season after KL Rahul's men lost a heart-breaking super over match against Delhi Capitals. That match should have won Kings XI Punjab full points but for some dramatic turn of events in the final over against DC.

The big win against RCB was KXIP's second biggest ever in IPL. King's XI Punjab's biggest win also came against RCB. It was a 111-run victory that came in IPL 2011. Thursday's win was clearly fashioned by KL Rahil's majestic 132 off 69 balls. And then the KXIP's leg-spinners -- Ravi Bishnoi and Murugan Ashwin with three wickets apiece -- took over to kill RCB's fightback.

Rahul, whose 132 is now the highest by an Indian batsman and an Indian captain in IPL, came after two lives. Virat Kohli dropped Rahul on 83 and 89 but that apart, the Karnataka batsman was in complete command.

"I have actually been not so confident (hitting it this well). I had a chat with Maxi (Glenn Maxwell) yesterday, he said how are you feeling, I said that I am not feeling completely in control of my batting, he said you must be joking, you are hitting really well," Rahul said at the post-match presentation.

KL Rahul had already spoken about his fears leading up to the IPL, considering he was coming back after a five-month long break due to the COVID-19 pandemic.

"Quite honestly I was nervous but I knew if I spend time in the middle, hit a few balls from the middle of bat, it will all settle down.

"I try to do (the same routines as I did when I was a player) but as a captain you have shortened time and you are running around and doing a lot of things," Rahul said.

Rahul is captaining in the IPL for the first time.

"I still try to maintain the same routine. Once I am in the middle and during the toss is the only time I feel like a captain and otherwise I try to balance being a player and the captain," he said.

After Rahul starred with the bat, KXIP bowlers put a disciplined performance to bundle out RCB for 109 in 17 overs.

"It's as complete a team performance as it can get. We had few different plans going into this game.

"We knew RCB have a power packed batting line up and we had to get 2-3 wickets up front and that also meant putting runs on the board, we know what these guys can do if they get set. The analyst, coaches and the management will be happy."

Rahul was all praise for young leg-spinner Ravi Bishnoi.

"Something that has impressed me in him (Bishoni's heart of coming back even after an expensive start). I watched the U-19 World Cup. He has a lot of fight in him.

"Every time I throw the ball he wants to do well, he was a little nervous bowling at guys like Finchy and AB, once he got through that he did well," added Rahul.