IPL 2019: Ziva Dhoni Screams At The Peak Of Her Voice To Cheer Dad MS Dhoni

Ziva leads the cheer-chants in favour of of her dad during Chennai Super Kings' clash against Delhi Capitals at Delhi in the Indian Premier League encounter on Tuesday. 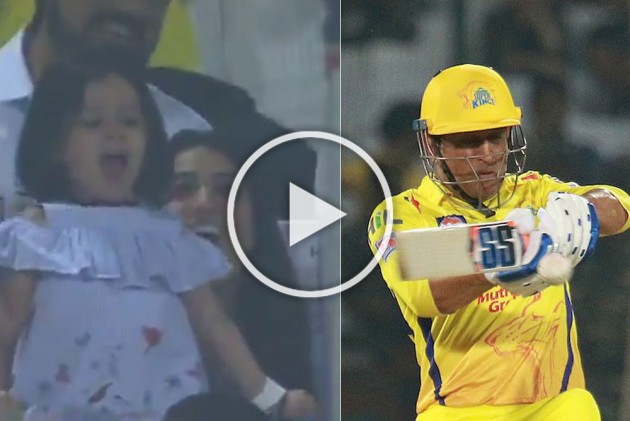 Mahendra Singh Dhoni’s daughter Ziva personified cuteness and innocence yet again. She is one of the most famous star daughters in India. And the 4-year-old is already following her father as the former Indian captain continues to wield his magic on the cricketing field.

She was seen once again cheering out loud from the stands as her iconic dad steered Chennai Super Kings (CSK) home against Delhi Capitals (DC) at Feroz Shah Kotla Ground on Tuesday. When the entire stadium erupted with Dhoni’s arrival, it was Ziva’s cheer of ‘Come on Papa’ that took the entire limelight during CSK’s encounter against DC. With her mom Sakshi beside her, Ziva was seen enthusiastically cheering for Dhoni as the entire crowd went frenzy. Watch it here:

Ziva, who has a huge fan following, just like her dad is a sensation on the social media. Recently, she was also seen learning linguistic lesson from Dhoni. The father-daughter duo share a unique bond that has caught the eyes of millions.

Dhoni batted for the first time in this IPL season. He came out to bat after the fall of Suresh Raina’s wicket in the 11th over. He scored a patient 32 off 35 balls, while chasing Delhi’s target of 148. CSK won the match by 6 wickets with two balls to spare. This was defending champions second win in two matches and fifth win on the trot, continuing their rich streak from last season.

Ziva was born to Sakshi Dhoni and MS Dhoni in 2015 when the former Indian Captain was at the 2015 World Cup Campaign in Australia.  MS Dhoni Married Sakshi Singh Rawat, his schoolmate on July 4,2010.