India's Shikhar Dhawan has been ruled out of the remainder of the ICC Cricket World Cup 2019 due to a fractured thumb he sustained during the game against Australia. Rishabh Pant, who was flown in as a standby last week, was added to India's squad as a replacement following approval from the ICC. 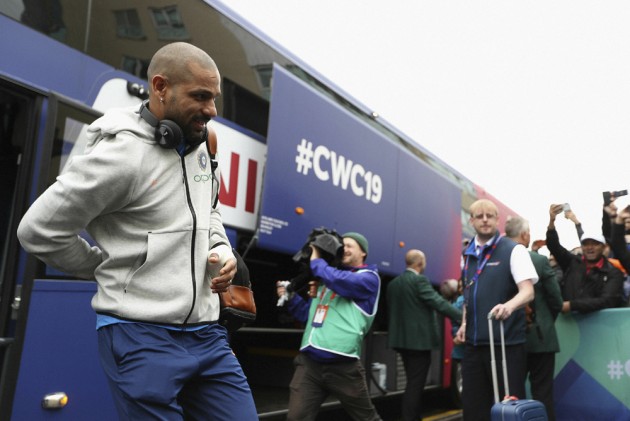 India opener Shikhar Dhawan has been ruled out of the ICC Cricket World Cup 2019 due to a fractured thumb. The veteran left-hander batted through pain after being hit by a delivery from Australian pacer Nathan Coulter-Nile earlier in the tournament. Dhawan scored a century in that match as India won by 36 runs.

It was expected that Dhawan will be out for three weeks and return in time for the Bangladesh match on July 2, but he will be returning home.

The ICC has confirmed that the Event Technical Committee of the World Cup has approved Rishabh Pant as a replacement player for Dhawan in India’s squad for the remainder of the tournament.

KL Rahul replaced Dhawan as opener in India's previous match against Pakistan that Virat Kohli's side won by 88 runs at Manchester on Sunday. Rahul hit a half-century.

After being hit on his thumb, Dhawan looked to be in considerable pain, but carried on to score 117 off 109 balls. However, he didn't take the field during Australia's innings.

It was also revealed that physio Patrick Farhart would take a call on his participation in the next game against New Zealand at Trent Bridge on Thursday.

After the win against Australia, Dhawan had stated, "We are happy with the result, as it was a great team effort. It's a great sign for our team and I'm happy with this man of the match award. We are very happy with the performance overall."

In a tweet, BCCI stated, "UPDATE- Shikhar Dhawan has been diagnosed with a fracture of the first metacarpal on his left hand following a ball impact injury during the team’s first match versus Australia at the Oval on 5th June 2019."

UPDATE- Shikhar Dhawan has been diagnosed with a fracture of the first metacarpal on his left hand following a ball impact injury during the team’s first match versus Australia at the Oval on 5th June 2019.

In another tweet, the body added, "Following several specialist opinions, he will remain in a cast until the middle of July and therefore will not be available for the remainder of #CWC19".

Following several specialist opinions, he will remain in a cast until the middle of July and therefore will not be available for the remainder of #CWC19

For the past few years, Dhawan has built an excellent opening partnership with Rohit Sharma. The duo have put in terrific performances in national colors. With quite a few important matches coming up, his absence will raise an issue as to how will India cope without him. The Men in Blue have been in terrific form of late, winning both their World Cup fixtures (against South Africa and Australia).

Other than scoring runs, Dhawan's main asset is to reduce the pressure off Rohit Sharma. Sharma usually takes time to adapt to opposition deliveries, and it is his partner-in-crime who reduces the pressure.