India beat South Africa by seven wickets with one over to spare in the second T20I match at Mohali, and in the process, Virat Kohli overtook his deputy Rohit Sharma to become the batsman with most runs in T20Is 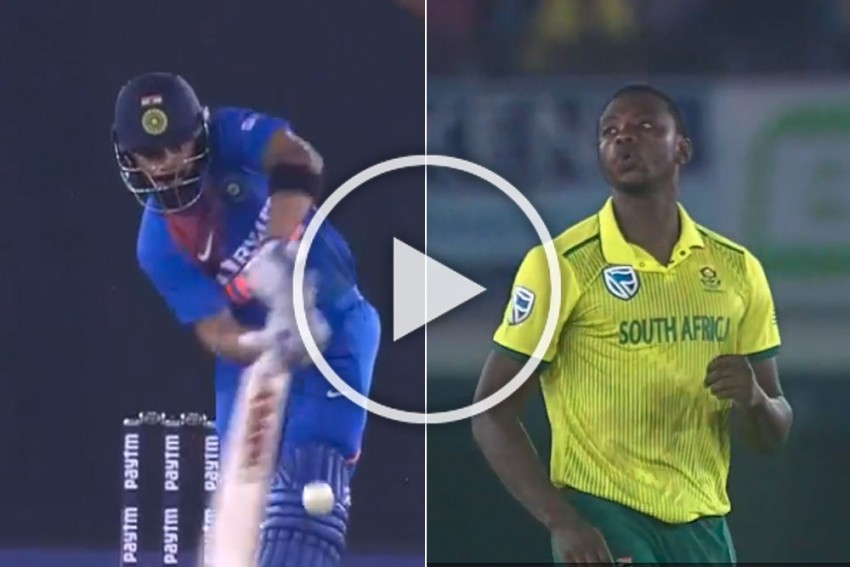 Kohli is the only batsman to average more than 50 in all three formats of the game.
Screengrab: BCCI
Outlook Web Bureau September 18, 2019 00:00 IST India Vs South Africa, 2nd T20I: Record-Breaking Virat Kohli Tops His Brilliant Knock With Slickest Of Sixes – WATCH

Virat Kohli remained unbeaten on 72 runs to help India beat South Africa by seven wickets in the second T20I match at Mohali on Wednesday. During his 52-ball knock, the skipper hit four fours and three sixes, including one of the slickest maximums.

Chasing a target of 150 runs, Kohli arrived in the centre in the fourth over after the fall of Rohit Sharma at the score of 33. The 30-year-old then took charge of the proceeding, playing a typical 'Kohli knock,' replete with sublime strokes and relentless accumulation of singles and doubles.

In the 17th over, he hit the first ball off Kagiso Rabada with such nonchalance that the ball hardly touched the blade. Reading the length early, the right-handed batsman stayed back and caressed the ball over backward square boundary, into a delirious crowd.

During the South African innings, he also took a blinder of a catch to dismiss his rival number, Quinton de Kock, who was threatening to take the Indian bowlers apart. The wicketkeeper-batsman made 52 off 37 balls with eight fours before becoming Navdeep Saini's lone victim in the 12th over.

India won the match by seven wickets with one over to spare, and in the process, Kohli overtook his deputy Rohit to become the batsman with most runs in T20Is. He now has 2441 runs at an average of 50.85, from 66 innings as against Rohit's 2434 from 89 knocks.

The third and final match will be played at Bengaluru on Sunday.

The first match at Dharamsala was abandoned due to rain.