Resuming the day at a precarious 39 for three, South Africa were expected to surrender rather quickly but Dean Elgar (76 off 141) and Faf Du Plessis (48 off 84) played with positive intent against the Indian spinners in their combative fifth-wicket partnership. 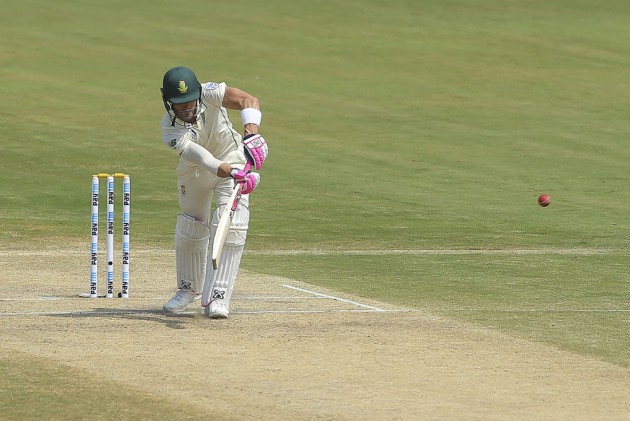 Dean Elgar and skipper Faf du Plessis resisted the Indian attack with an unbeaten 90-run partnership, which took South Africa to 153 for four at lunch on day three of the first Test, at Visakhapatnam, on Friday.

Resuming the day at a precarious 39 for three, South Africa were expected to surrender rather quickly but Elgar (76 off 141) and Du Plessis (48 off 84) played with positive intent against the Indian spinners in their combative fifth-wicket partnership.

The Proteas still have a mountain to climb as they trail India by 349 runs.

While Ravinchandran Ashwin and Ravindra Jadeja got more purchase out of the surface than the South Africa spinners, the pitch did not appear to have demons in it. The odd ball, though, did jump off the wicket.

Ashwin, who looked menacing in the final session on Thursday, could not get a wicket in the morning. Both Elgar and Du Plessis were not afraid to use their feet against Ashwin, playing some lofted shots.

Elgar made his intentions clear early on by going for the loft over mid-on even though it was a mishit for four. He grew in confidence from there on and was successful in executing the aerial hits and shots through the ground.

Elgar, who liked all South African batsmen had a forgettable tour of India four year ago, brought his 14th Test fifty with a single in the 40th over. A little later, the southpaw smashed Jadeja for two sixes and a four in the same over.

The luck was also on his side when he was on 74 as Saha dropped a sharp catch off Jadeja.

At the other end, Du Plessis too looked comfortable ever since he charged down the ground to Ashwin for the first six of his innings.

Pacer Ishant Sharma picked up the sole wicket to fall in the session when he got one to jag back in sharply and trap Temba Bavuma (18) in front of the stumps.

On the second ball of the day, Bavuma had gone for a lazy drive off a full ball from Ishant but since there was no second slip, the edge flew for four.