Wriddhiman Saha and Shivam Dube revived the India A innings after they were reduced to 168 for 5 against West Indies A at Antigua. 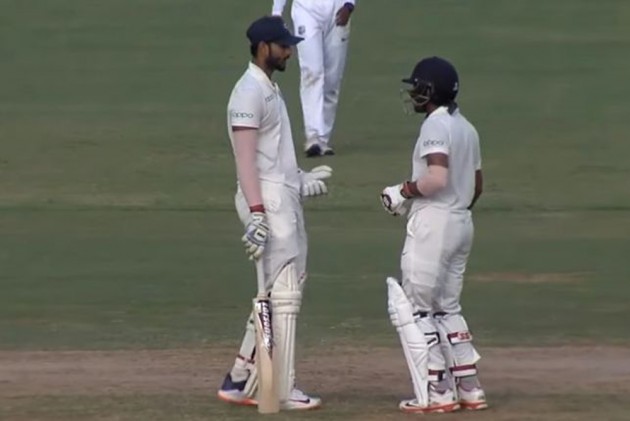 Comeback man Wriddhiman Saha and Shivam Dube shared 124 crucial runs for the sixth wicket after a top order struggle as India A took a 71-run lead in their first innings on Day 2 of the first unofficial Test against West Indies A in Antigua.

After resuming on 70 for 1, India A added 229 runs at the expense of seven wickets as the visitors were placed at 299 for 8 at stumps on Day 2 at the Sir Vivian Richards Stadium. India A had bowled out the home side for 228 on the first day.

Saha, who was named in the Test squad for the West Indies tour next month after spending in the sidelines for more than a year due to an injury, was batting on 61 not out off 146 deliveries. He has hit six fours do far.

The Bengal wicketkeeper-batsman and Dube revived the India A innings after they were reduced to 168 for 5. After Dube was out, India A lost two lower-order batsmen in quick succession for the addition of just seven runs.

Krishnappa Gowtham (6) and Shahbaz Nadeem (0) were out at the score of 299. The stumps were drawn when Nadeem was out in the 99th over of the India A innings.

Earlier, opener Priyank Panchal (49) and Shubman Gill (40) added 46 runs for the second wicket before they were separated. Captain Hanuma Vihari contributed 31 runs off 80 deliveries while Srikar Bharat was out for a first-ball duck as India lost wickets at regular intervals.

For West Indies A, pacer Miguel Cummins was the most successful bowler on the day with three wickets while off-spinner Rahkeem Cornwall took two. Chemar Holder and Jomel Warrican got one wicket each.