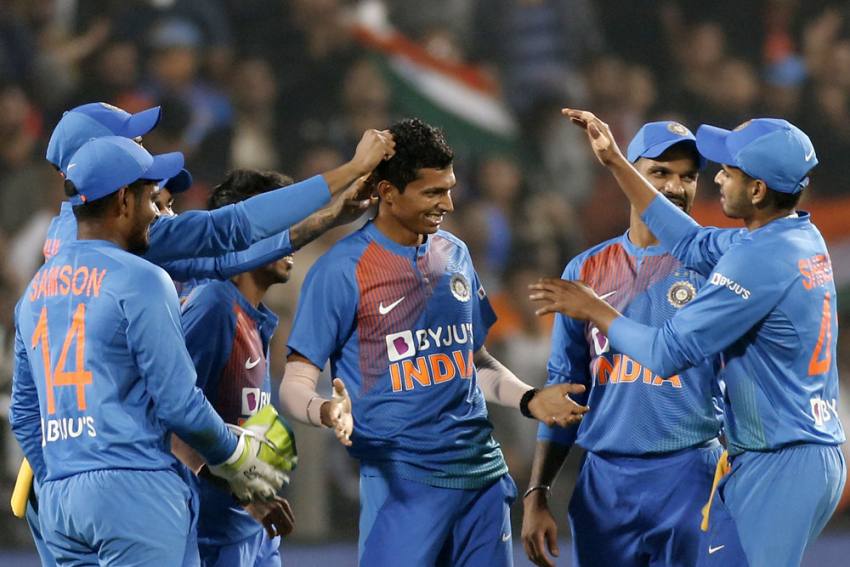 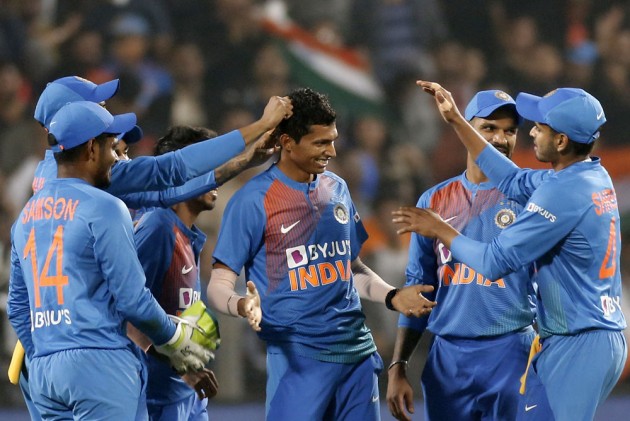 Shikhar Dhawan silenced his critics, KL Rahul sizzled as usual and the trio of fast bowlers were intimidating in India's one-sided 78-run victory over Sri Lanka in the third T20 International on Friday, sealing the series 2-0.

India were sent into bat by Sri Lanka captain Lasith Malinga but on a flat track, the hosts managed an above-par 201 for 6, largely due to Dhawan (52 off 36 balls) and Rahul's (54 off 36 balls) opening stand of 97 in little less than 11 overs.

Shardul Thakur (21 not out off 8 balls) used his long handle to a good effect and Manish Pandey (31 off 18 balls) hardly showed any rustiness adding 37 runs in final 2.2 overs to take the score past 200-run mark.

In reply, Sri Lanka managed only 123 runs in 15.5 overs as there was simply no resistance from the islanders with the gulf in class being so evident in a lopsided contest. Eight Sri Lankan batsmen failed to reach double figures with Dhananjaya De Silva (51) and Angelo Mathews (31) adding 68 for the fifth wicket.

They lost four wickets in the Powerplay overs and there was no coming back from that position. It was primarily due to the pace and bounce generated by Jasprit Bumrah (1/5 in 2 overs), Shardul Thakur (2/19 in 3 overs) and the ever-improving Navdeep Saini (3/28 in 3.5 overs), who again bowled an unplayable yorker to get Kusal Perera out.

In fact, skipper Virat Kohli could be lauded for promoting Sanju Samson (6) and Pandey, who have been benched for the longest time. While Samson fluffed his lines, Pandey did his case no harm with a useful knock towards the end.

"One thing was always in the back of my head that down the line somewhere I will get a game and I was ready for it. That's what the coaches told me also. Got my chance today, had a good partnership with Shardul," Pandey said after the match.

"I was batting well in the domestic season and the nets, so I knew I had to be ready when I got my chances. I had to deliver. You keep working on yourself."

Put into bat, Dhawan, who has been under pressure for some time smashed seven boundaries and a six in his 97-run opening stand with the in-form Rahul who also hit an over boundary along with five fours.

However, the hosts suffered a middle-order collapse with Sri Lankan wrist spinners Wanidu Hasaranga (1-27) and chinaman Lakshan Sandakan (3-35) spun their web around the batsmen on a flat track.

But Pandey, playing his first game of the tournament and Thakur once again revelling in his role as a lower-order pinch-hitter (22 not out off 8 balls; 1x4, 2x6) ensured that the hosts crossed 200-run mark.

Rahul set the tone playing a cut shot off rival skipper Lasith Malinga for his first boundary. Dhawan got an early 'life', when Dasun Shanaka dropped one at deep square leg. Rahul, then hit two consecutive boundaries, both drives, off Angelo Mathews as India raced to 22/0.

The visitors introduced off-spinner Dhananjaya De Silva in the fourth over, but Dhawan welcomed him with a four over long-on. Rahul then dispatched a Silva full-toss over long leg for a maximum as India amassed 13 runs in it.

Dhawan changed his gears as he hammered two boundaries in fifth over as India reached team total of 50.

Making optimum use of the life, Dhawan smashed back-to-back fours, slashing one over backward point and another through extra cover off pacer Lahiru Kumara. The duo was coasting along well as India after 9 overs were 82/0.

After two quiet overs, Dhawan smashed Hasaranga over deep mid-wicket for a six.

Soon after completing his 10th T20I fifty, Dhawan perished after giving a sitter to Dhanushka Gunathilika off Sandakan at deep mid-wicket. However his innings certainly will make Virat Kohli's choice of Rohit Sharma's partner difficult for the upcoming Australia series.

Sanju Samson (6) got his much-awaited chance as he was promoted at No 3 and smashed a six on the first ball but was trapped in the front by Hasaranga as India slumped to 106/2.

Sandakan then pegged back the hosts by removing Rahul and Shreyas Iyer (4) in the 13th over as the hosts were in spot of bother at 122/4. While Rahul was stumped, Shreyas gave a return return catch to Sandakan.

However, then skipper Kohli (26 off 17 balls, 2x4; 1x6) and Pandey tried to rally the innings before Kohli and Washington Sundar (0) were dismissed in the 18th over. But Shardul's slogging got India past par-score mark.