The first semi-final of the ICC Cricket World Cup 2019 between India and New Zealand at Old Trafford, Manchester was stopped due to rain, forcing concerned fans to work out all the possible scenarios 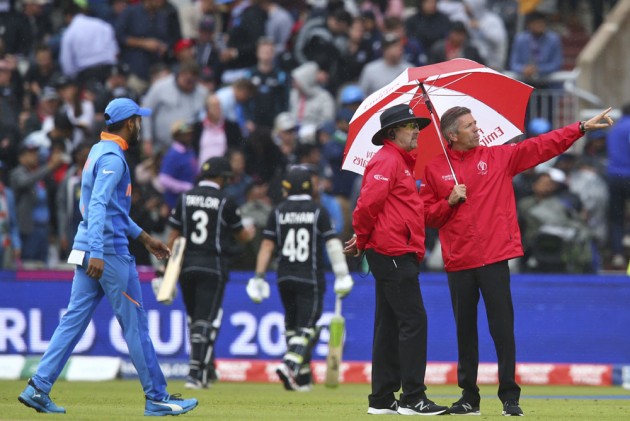 And cricket being cricket,  not all fans are sure of what will happen in such a scenario, even though the organisers -- the all-powerful International Cricket Council (ICC) has graciously accommodated reserved days for the knock-outs -- the two semi-finals and the final. But still, it takes a lot of explaining to understand the many possibilities.

Here's what we found:

According to the official website, "the umpires will do everything they can to complete the game today [Tuesday], exactly as if there were no reserve day, with a minimum of 20 overs per innings. If a game is unable to be completed today then play will resume tomorrow [Wednesday] with the objective to get as full a game as possible."

1. As the Kiwis have played more than 20 overs (46.1 overs), their innings is as good as over considering the time-bound nature of the game.

2. So, when the play resumes, it will be India's turn to bat (if the rain stoppage exceeds the closing time of first innings). And a target will be set according to the 'infamous' Duckworth-Lewis-Stern ( DLS) method. At first glance, India's revised target would be around 235+ in 46 overs. Advantage Kiwis!

By the way, the cut-off time is two hours after the end of normal play.

Also Watch: When Virat Kohli Dismissed Kane Williamson, And How!

3. If rain persists and play can't be completed today, then it will continue tomorrow. Continue, it's the key word here. The target, if set, remains the same even if there is scorching sun. Advantage India.

4. If it's washed out, then India go through courtesy their higher ranking in the group stage.

Earlier, New Zealand won the toss and opted to field. India made one change in their playing eleven, replacing Kuldeep Yadav with Yuzvendra Chahal. A fit-again Lockie Ferguson replaced Tim Southee in the New Zealand line-up.