BCCI President Sourav Ganguly recently made it clear that all contracted players must head to the NCA for rehabilitation if injured and that has seen the trio -- Hardik Pandya, Bhuvneshwar Kumar, Shikhar Dhawan -- land at the academy to get the necessary fitness certificate 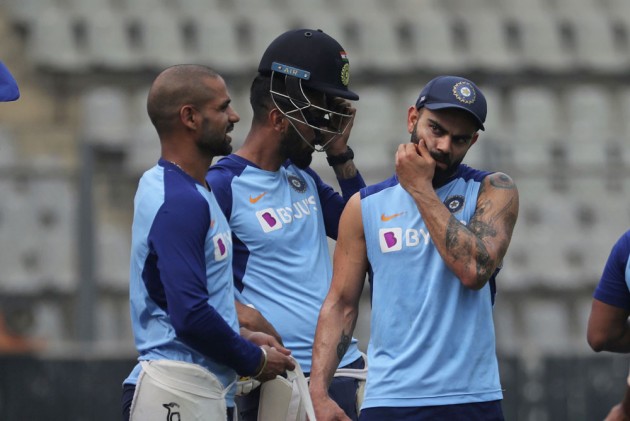 Team India might have left for New Zealand after the end of the three-match ODI series against Australia, but assistant trainer Yogesh Parmar has stayed back in Bengaluru and will be working closely with the trio of Hardik Pandya, Bhuvneshwar Kumar and Shikhar Dhawan.
While Pandya will complete his rehab after undergoing back surgery, Bhuvneshwar underwent surgery for a sports hernia and Dhawan injured his shoulder in the last ODI against Australia on Sunday. (More Cricket News)

Speaking to IANS, sources in the team management said that Parmar didn't fly with the rest of the squad as he will work closely with the three Indian players over the next 10-15 days at the National Cricket Academy (NCA).

"Parmar didn't take the flight to New Zealand as he was asked to stay back at the academy and work with the three India players over the next 10-odd days. Parmar staying at the NCA makes it easier for the players as well because he has closely monitored the progress made by both Pandya and Bhuvneshwar and knows their medical history well. He was accompanying both for their surgeries," the source explained.

Bhuvneshwar travelled to London on January 9 and underwent a successful sports hernia surgery on January 11. The pacer returned to India and commenced his rehabilitation at the NCA.

Interestingly, the pacer had been at the NCA on and off post the World Cup as he looked to gain 100 percent fitness. But the experts at the academy failed to spot the hernia despite conducting a number of tests and just two games into his return to the national side -- against
Windies -- Bhuvneshwar started complaining of discomfort. A test by the Team India medical team revealed that the fast bowler had a sports hernia.

In Pandya's case also, it was Parmar who had travelled with the all-rounder to the UK for the back surgery. And while the player decided to undergo rehab under Delhi Capitals trainer Rajnikanth Sivagnanam, Parmar was the one who was coordinating with the player and keeping an eye on the progress he was making.

But BCCI President Sourav Ganguly recently made it clear that all contracted players must head to the NCA for rehabilitation and that has seen the trio land at the academy to get the necessary fitness certificate to return to international cricket after their rehab is complete.

While Pandya and Bhuvneshwar are not in the scheme of things for the upcoming T20I series against New Zealand, Dhawan will miss the series after Sunday's injury and it could once again be that Sanju Samson -- who is part of the India 'A' team in New Zealand -- is sent in as cover if
the senior team needs a back-up batsman.