The I-League match between Indian Arrows and NEROCA FC struggled for direction in the opening stages, with either of the sides struggling to retain possession for long, then Sushil Meitei and Vikram Pratap Singh scored before the break 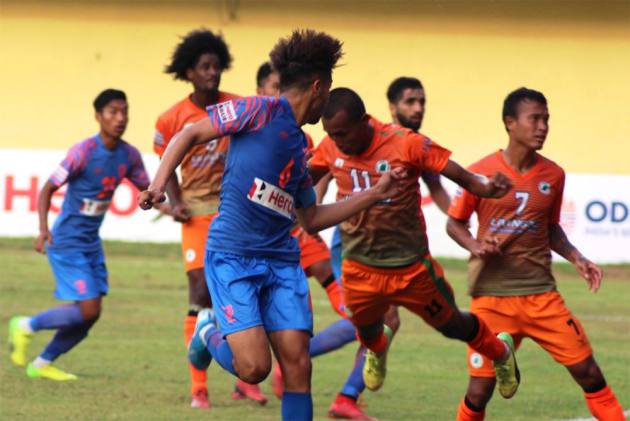 All India Football Federation's (AIFF) developmental side Indian Arrows played out a 1-1 draw with NEROCA FC in an I-League clash at the Tilak Maidan, Fatorda on Sunday. (More Football News)

Sushil Meitei gave the visitors the lead in the 24th minute before Vikram Partap Singh equalised for the hosts three minutes to the end of the first half.

The match struggled for direction in the opening stages, with either of the sides struggling to retain possession for long.

The first real opening of the match fell to the Arrows in the 15th minute. A great through ball by Ayush Adhikari found Vikram Partap Singh, who had made a well-timed run, but was denied in the nick of time by a calculated tackle from Ousmane Diawara.

In the 24th minute, it was NEROCA who took the lead through a free-kick about 25 yards from goal. Sushil Meitei was on the other end of the set-piece and his effort went over the wall and into the bottom right corner, through the palms of Lalbikhlua Jongte in the Arrows goal.

The visitors almost doubled their lead four minutes later, this time through Boubacar Diarra. The Malian forward was at the right place to head a Meitei cross towards goal, but his effort flashed a whisker wide off the woodwork.

The Arrows, who were enjoying lion's share of possession, started showing more intent in the final ten minutes of the half and their persistence was rewarded going into half-time.

In the 42nd minute, the hosts earned a corner which was taken by Givson Singh and headed across to the far post by Vikram Pratap for the equaliser, as both sides headed into halftime with a goal apiece.

Gift Raikhan's men came out in the second half with more intent, looking to strike early. In the 48th minute, a beautifully weighted ball by Lhungdim was latched onto by Khanngam Horam and with only the keeper to beat, he hit it straight at him.

The visitors were turning on the style and in what can be summed up as a moment of deft brilliance in the 56th minute, Gaty Kouami displayed his finesse and flair. Just when he seemed to be losing possession, the Togo midfielder scooped the ball with an exquisite first touch and tried pulling off a spectacular with a scissor kick. It was nothing short of an audacious attempt indeed but Jongte, in goal, was all alert to collect.

Indian Arrows had a late surge in the closing stages of the game and in the 86th minute, had a huge shout for a penalty when Vikram was brought down in the box by Diawara but the referee didn't pay any heed to that.