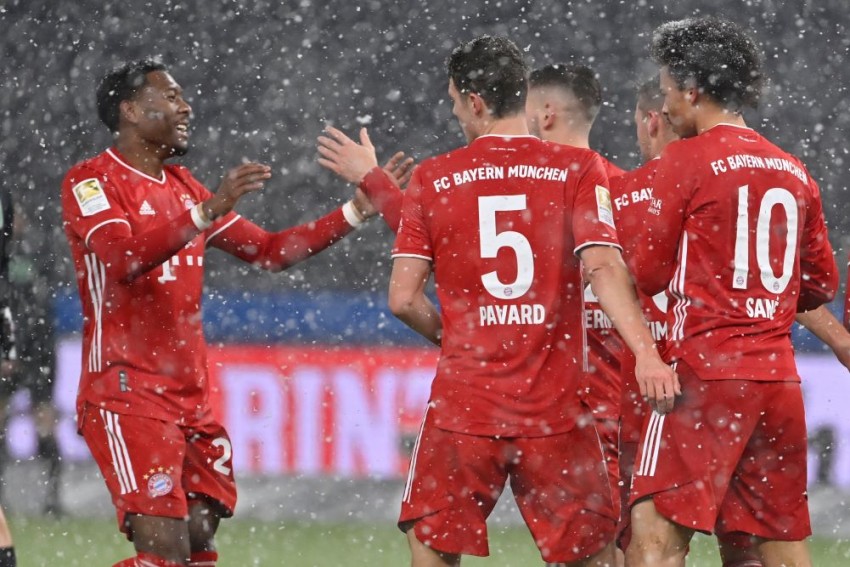 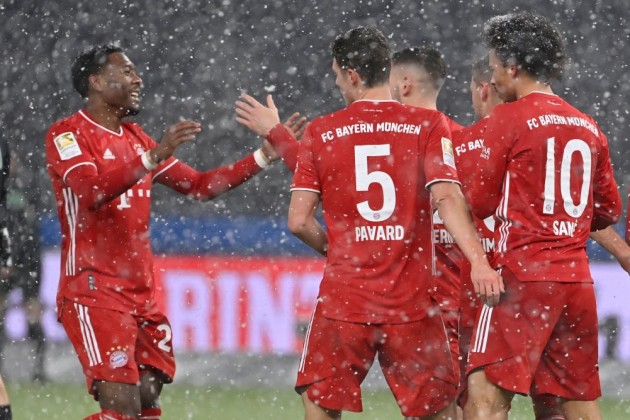 Amid heavy snowfall at the Olympiastadion, Coman scored in the 21st minute after the returning Rune Jarstein – making his first league appearance since June – became just the second Bundesliga goalkeeper to save a penalty from Robert Lewandowski.

Dodi Lukebakio and Krzysztof Piatek had chances for Hertha in Pal Dardai's first home game since taking over as head coach for a second time but Bayern held on for the win.

Hansi Flick's side consequently opened up a 10-point lead at the summit over RB Leipzig, who face bottom side Schalke on Saturday.

Manuel Neuer did well to keep out Lukebakio and Jarstein matched him by denying Leroy Sane, but he tripped the former Manchester City winger to concede an early penalty.

Lewandowski was unable to score from the spot, though, as his run of 16 straight converted penalties in all competitions ended with a redeeming moment for Jarstein.

2 - Rune Jarstein (@HerthaBSC_EN) is only the 2nd Bundesliga keeper to save a penalty by Robert Lewandowski. The first was Manuel Neuer in 2013, when facing Lewandowski, who played for Dortmund back then. Surprise. #BSCFCB #Bundesliga pic.twitter.com/BmBMlmEWAu

However, there was nothing the Hertha keeper could do when Coman's shot from just outside the box deflected off Niklas Stark and looped into the back of the net.

Lewandowski was denied by Jarstein before World Cup winner Sami Khedira came off the bench to make his Hertha debut.

Matheus Cunha had a chance to snatch a point for the hosts when he was released by Matteo Guendouzi in the 89th minute but his dink over Neuer drifted just wide.

What does it mean? Bayern show vulnerability

Unsurprisingly that left Flick's side vulnerable on the counter-attack and Neuer was forced to make five saves in the first half of a Bundesliga game for just the second time in his Bayern career.

Hertha were unable to take their chances and Flick will likely have his experienced options available again when they return to Bundesliga duty against Arminia Bielefeld a week on Monday.

Things could have been very different had Neuer not got a foot to Lukebakio's third-minute effort. The Germany international made seven saves in total to record his 16th Bundesliga clean sheet against Hertha – a record for any goalkeeper against one particular opponent, having surpassed Oliver Reck's 15 against Borussia Monchengladbach.

After scoring in nine successive Bundesliga matchdays, Lewandowski failed to find the back of the net against Hertha despite taking a penalty. He was also unable to extend his record run of scoring in eight consecutive top-flight away matches.

- Rune Jarstein became only the second keeper in Bundesliga history to save a penalty by Robert Lewandowski. The first being Manuel Neuer in May 2013 as Bayern keeper versus Lewandowski as Dortmund player (1-1 in Dortmund).
- Thomas Muller assisted his 10th goal in this Bundesliga season, adding to his 10 goals. It is already his fifth season with double digit numbers in both goals and assists, a Bundesliga record (data since 2004-05).
- Bayern Munich have won their past five Bundesliga games and now have a tally of 48 points after 20 games – their best since 2017-18 under Jupp Heynckes and six more than in both previous seasons.
- Hertha have taken only one point in the previous six Bundesliga games, making Pal Dardai the first Hertha coach since Michael Skibbe in 2012 to lose his first two Bundesliga games after being appointed.

Bayern go from the snow of Berlin to the sun of Qatar with a Club World Cup semi-final meeting with Al Ahly on Monday. Hertha will look to end their six-game winless run at Stuttgart on Saturday week.