Tottenham may be struggling to fulfil Harry Kane's desire to win silverware, but Ryan Mason says the striker "loves" the club. 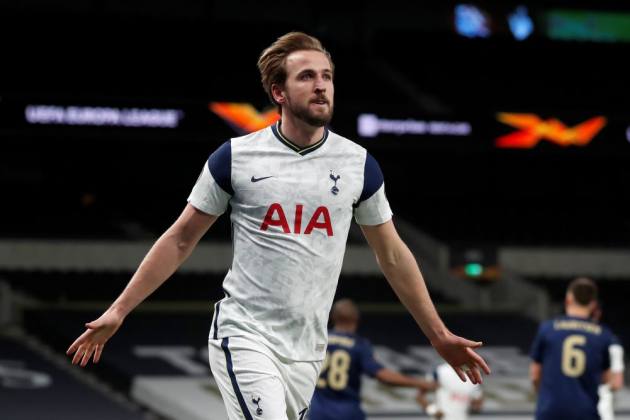 Harry Kane "loves" Tottenham and there is no suggestion he needs Champions League football in order to remain with the club, according to interim boss Ryan Mason. (More Football News)

Rumours over the club's star striker have been rife amid another disappointing season for Spurs, whose last hope of silverware vanished with Sunday's EFL Cup final loss to Manchester City.

Kane is the leading goalscorer in the Premier League this season with 21 from 30 games, and his 125-minutes-per-goal ratio better than he has achieved in the previous two similarly prolific top-flight campaigns.

The England captain was named Premier League player of the year at the London Football Awards on Tuesday but pointedly said trophies were more important than individual honours.

"I want to be winning the biggest prizes that there is to offer as a team and we are not quite doing that," he told the Evening Standard.

3 - Harry Kane is the first player in Premier League history to score 2+ goals in three consecutive away appearances against a single opponent (September 2017, December 2018 & April 2021 vs Everton). Thorn. pic.twitter.com/uRtW01gaw0

Spurs' chances of salvaging something noteworthy from this campaign rest on breaking into the top four and securing a seat at Europe's top table, with a five-point gap to fourth-placed Chelsea to overturn.

But Mason, whose side host relegated Sheffield United on Sunday, insists that will not be a decisive factor in Kane's decision-making process.

"I don't think so," he said when asked if Champions League qualification was a must as far as retaining Kane's services goes.

"Harry Kane loves this football club. In the past eight or nine years he has been one of the best strikers in the world. Everyone knows that and we know that and hopefully Harry knows that.

"Harry is a constant professional. There won't be any conversations between me and him about anything other than training and the match ahead."

Regarding the various clubs linked with Kane, including Premier League rivals Manchester City and United, Mason pointed out that such talk was nothing new.

"There's always speculation about the best players in the world," he said. "Harry Kane is one of, if not the best, number nine in the world. Talk has been there for a number of years. We don't need to manage that.

"Harry Kane is one of the most professional guys I've seen in my life. That's the most important thing, the players see a leader in training every day that sets the tone, sets the example and you can only appreciate and applaud that kind of mentality."

Kane has been involved in 34 goals in 30 Premier League games this season (21 goals, 13 assists), only registering more goal involvements in a single campaign in 2016-17.

He has been involved in nine goals in his last six league games (seven goals, two assists), netting three braces in that run.

Overall, he has scored 38 per cent of his team's top-flight goals this season, with only Sheffield United's David McGoldrick (39 per cent) ahead of him in that regard.