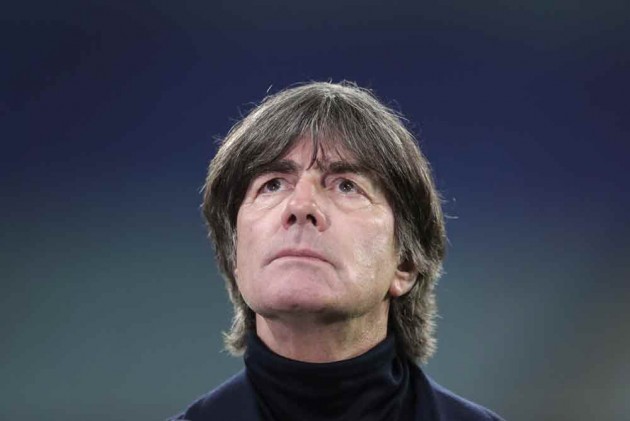 The World Cup winner has been under huge pressure following last month's 6-0 Nations League humbling at the hands of Spain.

It ended a 12-match unbeaten run for Germany and was their heaviest defeat since losing to Austria in a friendly in 1931 by the same scoreline.

The German Football Association (DFB) last week brought an end to the speculation over Low's future by throwing their support behind the 60-year-old.

But Bierhoff has eyed up alternative options should Low leave the position he has held since 2006.

"You have to be careful with words. It is an ongoing process," Bierhoff told Sky Sport. "Anyone who thinks I'll only think about alternatives after the Spain game is insane.

"Of course, you always have something in your head. Joachim is always informed about my thinking - that's my job."

Asked specifically about former RB Leipzig coach and managing director Rangnick, who has long been considered a natural successor to Low, Bierhoff said: "I also spoke with him."

Jurgen Klopp is another to have been touted as a candidate after winning the Champions League and Premier League with Liverpool.

But Bierhoff ruled out waiting for Klopp's Anfield contract to expire, saying: "There is no plan to hire Klopp in 2022."

6 - Joachim #Löw is only the 3rd manager of the German national team to concede 6 goals in a match after Otto Nerz and Sepp Herberger. Low. #ESPGERpic.twitter.com/VLGic1vWxw

Low guided Germany to World Cup success in 2014, four years after finishing third, and has reached a European Championship final and two semi-finals without winning the continental competition. His team also triumphed at the 2017 Confederations Cup.

Bayern Munich chief executive Karl-Heinz Rummenigge said he has not seen enough of Low lately, adding he must "deal more aggressively with the situation", but Bierhoff defended the coach's record in charge of Die Mannschaft.

"Low has had one bad year in 16 years," he said. "It is difficult to drive development under the current conditions. He has energy, conviction and a clear vision."

He added: "I don't see Rummenigge's statements as being that critical. Everyone has their own opinion. The important thing is that you are convinced of your path.

"The one who carries the ultimate consequences is the coach. Joachim does that. There are many examples in which the public opinion has also been different.

"Our team is inexperienced and needs time. Our greatest talent, Kai Havertz, has played only 10 international matches.

"We need to find some regularity but that has not been possible because of so many injuries.

"Other teams, like the Netherlands, have needed six years to redevelop their side - they missed two tournaments while doing it."

Another hot topic of debate surrounding the Germany national side regards the futures of Thomas Muller, Jerome Boateng and Mats Hummels.

All three players were dropped by Low last year and have not been recalled since, but their fine club form and the defeat to Spain have increased scrutiny.

"Jogi has never once said the door is completely closed to them," Bierhoff said. "Nothing personal happened. There is certainly no stubbornness.

"I'm happy that they are all doing so well. Joachim will ask himself, 'Who are the players I can work with best?' It is not a matter of principle."