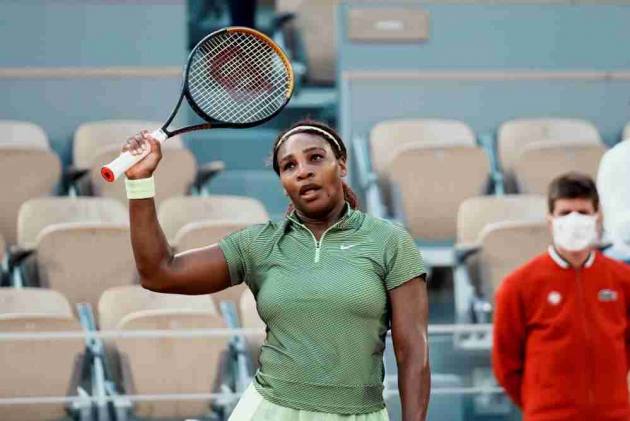 Serena Williams said her serve was the key to battling past Mihaela Buzarnescu 6-3 5-7 6-1 in the second round of the French Open on Wednesday. (More Sports News)

The win improved Williams' second-round record in grand slams to 74-2, her only defeats at this stage having come against sister Venus Williams when Serena made her major debut at the 1998 Australian Open, and against Garbine Muguruza seven years ago at Roland Garros in Paris.

Serena Williams won 75 per cent of the points played behind her first serve and saved five of the seven break points she faced in the French capital midweek.

"I felt it was pretty good today," Williams said of her serve. "But I've been practicing my serve a lot. I've been playing unbelievable on my serve in practice. The other night was, 'wow'. I'm glad it came better today.

"My coach told me it's good that I'm doing it well in practice because eventually it will be good in the match.

"I had some really good chances in the second set to win that. If I would have won just one point here or there, like four or five times, it would have been a different second set.

"I know going into the third I just had zero in on those one important points. If I could just take those, it would be an easier time for me."

"She's been playing well," Williams added. "She's also a really awesome person off the court. I love seeing her in the locker room.

"Ideally, it would be great if we didn't have to play each other because I always want her to do super well."

BENCIC DUMPED OUT BY KASATKINA

Belinda Bencic – the 10th seed – was dumped out by Daria Kasatkina 6-2 6-2, meaning there are no top-20 players left in the bottom quarter of the draw.

Bencic joined world number two Naomi Osaka, Bianca Andreescu and Kiki Bertens in departing the tournament after a dismal performance against Kasatkina, who will play in the third round of a major for the first time since Wimbledon in 2018.

Kasatkina's serve was in rude health, with the Russian and 2018 French Open quarter-finalist never facing a break point and racking up eight aces.

"A lot has changed between 2018 and now," said Kasatkina. "There was one amazing year for me, which was important in a good and in the bad way.

"I learned a lot, and I think I became a little bit different, maybe more experienced, a bit more serious. Let's say I understand more why I'm winning or why I'm losing.

"At that time everything was just going with the wave, and I was not thinking that much. Now I'm analysing more of what's going on in the situation I'm in. Getting maybe a bit more mature."

The only player left in that quarter who has previously reached a grand slam semi-final is 20th seed Marketa Vondrousova, who breezed past Harmony Tan 6-1 6-3.

Into R3 for the first time since 2018 @DKasatkina gets it done in straight-sets, sailing past Bencic 6-2, 6-2.#RolandGarros pic.twitter.com/9wd5vuL90k

Third seed Aryna Sabalenka booked her spot in the third round with a 7-5 6-3 win over fellow Belarusian Aliaksandra Sasnovich, despite tallying 34 unforced errors.

Sabalenka, who has the second-most tour-level wins this season with 27, said: "I'm really proud of myself that I was fighting no matter what, kind of trying to find my rhythm. I'm really happy with this win. It was a tough battle.

"I would say I definitely feel better this year, kind of believe that I can do well here on the clay court. I feel better and really happy to be here, to compete here."

Sabalenka will now face 31st seed Anastasia Pavlyuchenkova in the next round after the Russian defeated Ajla Tomljanovic 6-2 6-3.