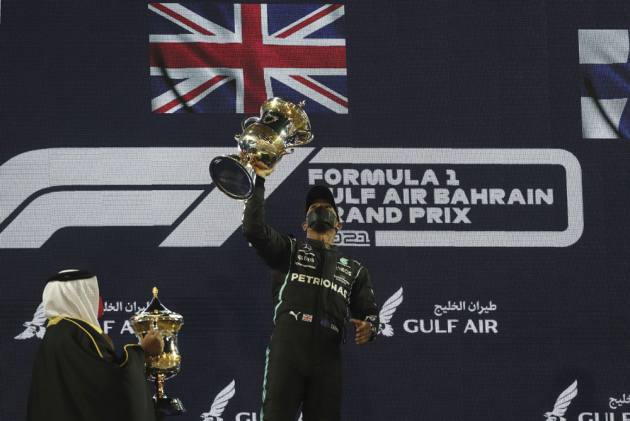 Lewis Hamilton clung on to survive a late attack from Max Verstappen to begin his Formula One title defence with a dramatic victory in the Bahrain Grand Prix. (More Sports News)

Verstappen's Red Bull had the edge in speed over Hamilton's Mercedes for the entirety of the race weekend but, after a frenetic stop-start opening to the race gave way to a strategic battle between the teams expected to compete at the front of the grid this season, it was the Briton who found himself taking the chequered flag.

Having emerged from his final pit stop nearly nine seconds behind Hamilton, pole-sitter Verstappen looked to have made the crucial overtake with four laps remaining.

But he was forced to give the place back having gone beyond the track limits to get past Hamilton, and Verstappen could not find an opportunity with which to make the decisive move for a second time, Red Bull left frustrated as the seven-time champion claimed his first season-opening win since 2015.

The omens were not great for Red Bull when Sergio Perez, making his debut for the team, stopped on track during the formation lap. That forced the field into an extra parade lap and the Mexican to start from the pit lane.

Perez, who pitted during the safety car period after debutant Nikita Mazepin went into the wall on the first lap, staged a magnificent recovery to finish fifth behind Mercedes' Valtteri Bottas in third and the excellent Lando Norris in the McLaren.

Verstappen complained about problems with his differential but the intrigue started when Hamilton pitted on lap 14 in a bid to undercut Red Bull, who did not respond until four laps later and were unable to retain the lead when the Dutchman headed into the pits.

He was back at the head of the field following Hamilton's second stop on lap 28 before Bottas' hopes of victory were effectively quashed by a problem with his right front tyre that extended his time in the pit lane.

Verstappen's final stop on lap 40 set the stage for a cat and mouse fight with Hamilton in which he was anticipated to prevail.

However, a failure to keep a wheel on the track as he went around the outside of Hamilton proved critical as Verstappen was immediately instructed to give the place back.

Another chance failed to materialise and a gripping opening act to the new season ended with a familiar face standing atop the podium.

Expletives were frequent from Verstappen early in race as he bemoaned a problem with his car and his mood was not improved after an engrossing finale. Verstappen was frustrated at being forced to let Hamilton past, claiming he could have made a potential five-second time penalty back on the track with clear air in front of him. His disappointment and understandable irritation should not take away from a weekend in which Red Bull proved they will be legitimate challengers to Mercedes.

Perez's fightback from starting from the pit lane to a fifth-place finish was a fittingly eventful debut on a day where new faces enjoyed mixed fortunes.

Carlos Sainz was in the points in his first race for Ferrari, finishing eighth while team-mate Charles Leclerc took sixth ahead of McLaren debutant Daniel Ricciardo.

Yuki Tsunoda was superb on his F1 bow, taking ninth for AlphaTauri, but Mazepin and Mick Schumacher, last among those who went the race distance, endured chastening starts to their F1 careers for Haas.

Fernando Alonso's return to the sport for Alpine was ended by brake problems, and Sebastian Vettel's first race for Aston Martin saw him finish a lowly 15th.