Tottenham thrashed Burnley 5-0 in Saturday's English Premier League clash to move up to the fifth place, Son Heung-min scoring the pick of the goals 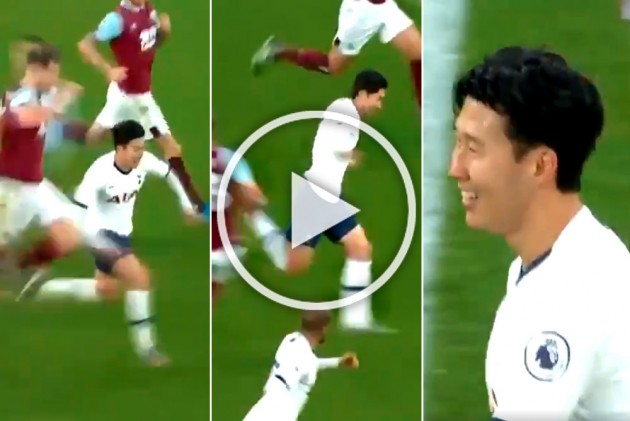 Son Heung-min scored a goal of the season contender as Tottenham returned to winning ways in the Premier League with a convincing 5-0 home victory against Burnley. (More Football News)

Tottenham suffered a first defeat under Jose Mourinho in midweek when going down 2-1 to Manchester United, but they turned on the style in Saturday's clash to climb up to fifth.

Mourinho's men were two goals ahead inside nine minutes, with Harry Kane opening the scoring from 25 yards out before Lucas Moura added a second from far closer range.

Son then scored a remarkable third goal by carrying the ball some 90 yards and slotting home, while Kane doubled his tally and Moussa Sissoko joined the scoring in an equally one-sided second half.

Kane took advantage of some hesitant Burnley defending to fire his side in front after 240 seconds with a fierce shot that caught out Nick Pope.

Pope got down to keep out Son's shot less than five minutes later, but the ball looped into the air, deflected off Dele Alli's back and Lucas was there to convert from a yard out.

6 - Dele Alli has been directly involved in six goals in five games under Jose Mourinho in all competitions (4 goals, 2 assists), twice as many as he registered under Mauricio Pochettino this season (2 goals, 1 assist in 10 apps). Inspired. pic.twitter.com/Vrrm0V13HR

Sissoko hit the post with a first-time shot and Alli was dispossessed by a brilliant challenge from James Tarkowski after being played through as Spurs' domination continued.

Burnley nearly pulled one back through a Robbie Brady header that hit the bar, but the hosts added a third before half-time thanks to Son's sublime solo goal.

It took less than 10 minutes of the second half for Kane to double his personal tally, the England international cutting inside Tarkowski and firing in at the near post.

Sissoko netted for the second home game running with 16 minutes remaining after playing a one-two with Kane and poking the ball past Pope to round off the scoring.

25 goals in 26 appearances for club & country this season.

What does it mean? "Angry" Tottenham up to fifth

Mourinho told his Tottenham players he wanted to see more "anger" on the back of their defeat at Old Trafford and they certainly showed Burnley no mercy in a ruthless display.

Spurs have now won four of their five matches under Mourinho, three of those victories coming in the Premier League to move them within six points of the top four.

Son set up Kane's long-range opener, played a key part in Tottenham's second and scored one of the finest goals of this or any other season to cap an incredible display.

He knocked the ball past seven Burnley players and kept his composure to slot past Pope, making it 15 goal involvements in 15 appearances at the Tottenham Hotspur Stadium.

Burnley back off too freely

All five Tottenham goals were preventable, each coming down to a mixture of slack defending and questionable goalkeeping.

In Pope's defence, he will ask how Son was allowed to carry the ball from one box to the other for the third goal, with the likes of Tarkowski and Ben Mee hardly covering themselves in glory.

Tottenham travel to Bayern Munich in the Champions League on Wednesday with a place in the last 16 already assured, while Burnley host Newcastle United in a week's time.