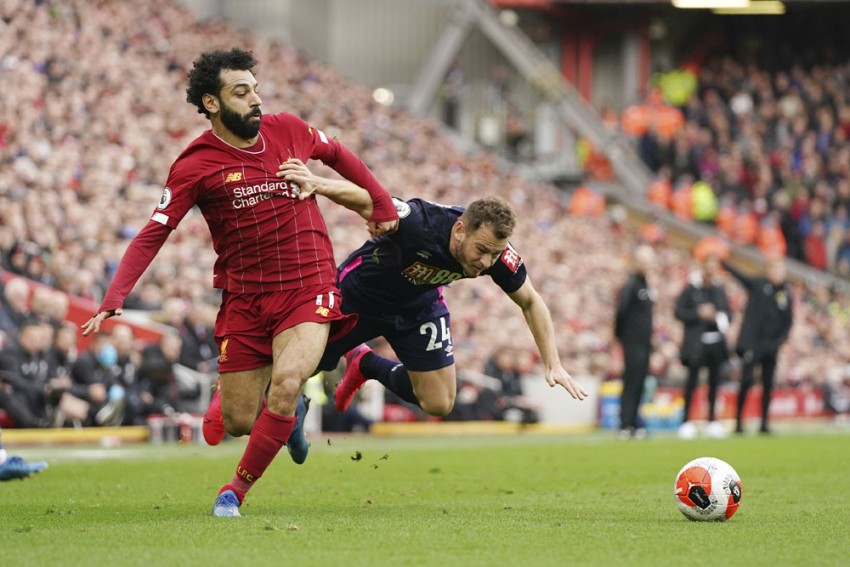 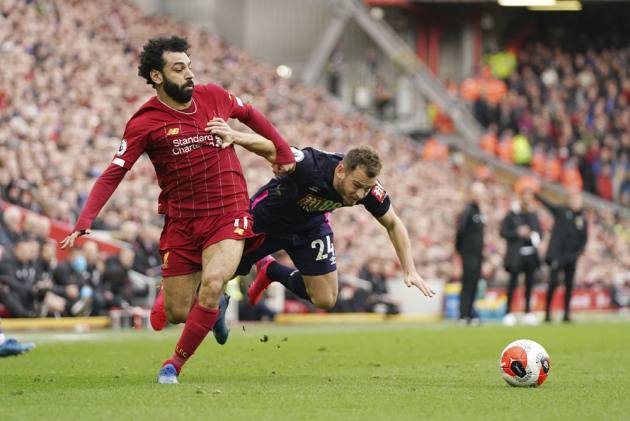 Mohamed Salah and Sadio Mane scored as Liverpool set a new top-flight record by coming from behind to beat Bournemouth 2-1 in the Premier League at Anfield. (More Football News)

Liverpool made history by winning a 22nd home league game in succession, despite Callum Wilson netting a controversial opener after a push on Joe Gomez in the build-up went unpunished by referee Paul Tierney and a VAR check.

Jurgen Klopp's side started sluggishly but reacted to that setback brilliantly, with Mane teeing up Salah to mark his 100th Premier League appearance for the club with a goal in the 25th minute.

Mane capitalised on further shoddy Bournemouth defending to ensure Liverpool bounced back following up their first league loss of the season to Watford last weekend, as well as an FA Cup defeat to Chelsea in midweek.

Bournemouth took a surprise lead inside nine minutes, Gomez nudged off the ball by Wilson before the striker rounded off a neat move involving Philip Billing and Jefferson Lerma with a tap-in at the back post.

It was almost two five minutes later when Nathan Ake's powerful header was unconvincingly palmed onto the crossbar by Adrian, who started in place of the injured Alisson.

However, Liverpool were back on level terms when Jack Simpson, sent on for the injured Steve Cook, was caught on the ball by Mane and his pass to Salah was fired through the legs of Lerma and into the bottom-right corner.

Virgil van Dijk intercepted a pass from Lewis Cook and quickly fed Mane, who was played onside by Ake and slid a cool finish beyond Aaron Ramsdale in the 33rd minute.

The tempo noticeably dipped after half-time and only a brilliant goal-line clearance from James Milner, who started at left-back with Andy Robertson rested as a precaution, stopped Ryan Fraser from restoring parity after the hour mark.

Mane rattled the upright with a beautiful, curling effort from 25 yards and Roberto Firmino blazed a glorious chance over in added time, but two goals were enough for Liverpool to secure a landmark result.

What does it mean? Liverpool back on track

After seeing their chances of replicating Arsenal's unbeaten Premier League campaign and Manchester United's famous treble from 1998-99 evaporate in the space of four days, the Reds avoided suffering successive top-flight defeats for the first time under Klopp.

They move 25 points clear of Manchester City, who have played two games fewer, and means they can still clinch the title at the home of the defending champions on April 5.

In his milestone appearance, Salah scored his 70th Premier League goal for Liverpool. It was a pinpoint finish despite a shoddy pass from Mane and made him the first Reds player to manage at least 20 times in all competitions in three straight seasons since Michael Owen, who achieved the feat between 2000-01 and 2002-03.

Despite going ahead early, the Cherries folded following the loss of Steve Cook. Errors from Simpson and Ake enabled Liverpool to turn the game around and stopped Eddie Howe's team from moving out of the relegation zone.

Liverpool will aim to keep their Champions League defence alive by overturning a 1-0 aggregate deficit against Atletico Madrid at Anfield on Wednesday, with a Merseyside derby against Everton the following Monday. Bournemouth are next in action at home to Crystal Palace in a week.