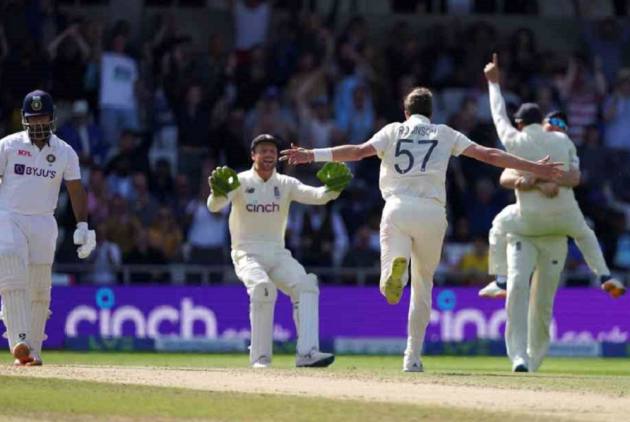 England’s  win by an innings and 76-run victory in the third Test match at Headingley, Leeds on Saturday  was their 10th biggest against India in Tests. Highlights | Gallery | Scorecard | News

As England levelled the five-match series 1-1,  India skipper Virat Kohli admitted after being all out for 78, they were always playing a catch-up game.
It was England’s fourth win in last five Test matches played at Headingley, Leeds.

West Indies is the only team to beat the host at this ground in last five matches. West Indies recorded a five-wicket win over England in 2017 series.

** Jos Buttler became only the second England wicket keeper to hold eight or more catches,
five in the first innings and three in the second, behind the wickets in a Test match against
India. Bob Taylor caught 10 Indian batsmen in the Mumbai Test in 1980.

** Ollie Robinson recorded his best bowling performance in Test cricket by taking five for 65
in 26 overs in Indian second innings. His previous best was five for 85 in 26.5 overs against
the same opponent in the first Test of the series at Nottingham. It was his second five-wicket
haul in eight innings of four Test matches.

** Ajinkya Rahane’s wicket was James Anderson’s 400th in 179 innings of 94 Test match in
England. He became only the second bowler after Muttiah Muralitharan to take over 400 wickets in a single country. The off spinner took 493 wickets in 134 innings of 73 Test matches in Sri Lanka.

** Joe Root became England’s most successful cpatain in Test cricket with this victory. It was
England’s 27th win in 55 Test matches under Joe Root.