Joel Embiid's return fuelled the Philadelphia 76ers' to a drought-ending 118-113 win over the Houston Rockets in the NBA on Wednesday. 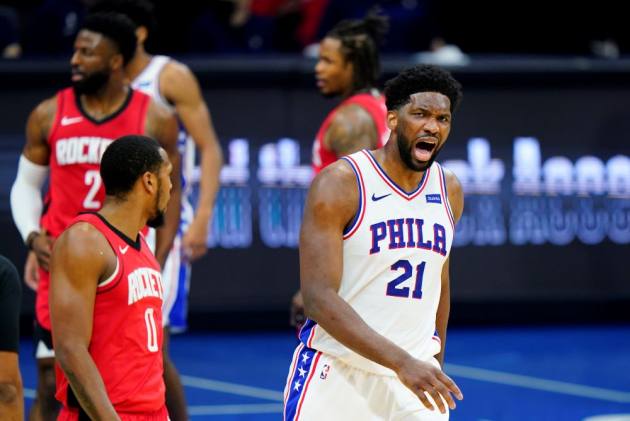 Joel Embiid's return fuelled the Philadelphia 76ers' to a drought-ending 118-113 win over the Houston Rockets in the NBA on Wednesday. (More Sports News)

Embiid had scored 35 points in back-to-back games before back tightness caused him to miss Monday's defeat to the high-flying Utah Jazz – a third straight loss – but the three-time All Star came back in style.

The star center claimed a 31-point, 11-rebound double-double, adding nine assists, as the 76ers dug deep against the Rockets to condemn Houston to a seventh defeat in a row midweek.

Philadelphia's win improved the 76ers to 19-10 atop of the Eastern Conference, while Western Conference leaders the Jazz extended their winning run to nine games with a 114-96 triumph against the Los Angeles Clippers.

The Jazz have won 20 of their past 21 games to set the pace in the NBA this season.

Elsewhere, the Portland Trail Blazers made it a 3-0 road trip with a 126-124 win against the New Orleans Pelicans as Damian Lillard scorched to 43 points and 16 assists after dropping the winning three-pointer in the final seconds.

Pelicans star Zion Williamson hit back with a career-high 36 points for the hosts, but Portland snatched a sixth consecutive win.

Damian Lillard is the 5th player in NBA history to reach 43 points and 16 assists in a game. pic.twitter.com/uIVi0Jue3g

Wednesday saw triple-doubles from Washington Wizards star Russell Westbrook, Ja Morant of the Memphis Grizzlies, the Indiana Pacers' Domantas Sabonis and Jimmy Butler of the Miami Heat. But the shooter that shined brightest was an unlikely hero, and another Wizard – power forward Davis Bertans. The Latvian came off the bench and was nine-of-11 from three-point range, while he was eight-of-eight from the free-throw line. Bertans became the first player in NBA history to score 30-plus points without attempting a two-pointer, per Stats Perform.

Davis Bertans of the @WashWizards scored 35 points tonight on 9/11 from three and 8/8 at the free-throw line.

He's the first player in NBA history to score 30+ points without attempting a two-pointer.

Bad day at the office for Clippers

If was an off-day for the Clippers as they were held below 100 points in their defeat against the Jazz. Reggie Jackson managed their best shooting rate at 41.7 per cent, with Lou Williams dropping the most baskets from the field, six, from his 18 attempts. Marcus Morris Sr. went four of 15 from the field and 0-of-two from the free-throw line, while no player topped 17 points.

Curry comes up clutch in OT

If you want the ball in anybody's hands with the game on the line right now, it is Stephen Curry. The Golden State Warriors ace put up 25 points and 11 assists in the 120-112 overtime win against the Miami Heat, with his most important bucket sealing the deal at the death. It put a dampener on Butler's day, after the Heat star became the first player in franchise history to score triple-doubles in consecutive games (13 points, 11 assists and 12 rebounds).

A mouth-watering challenge awaits LeBron James and defending champions the Los Angeles Lakers on Thursday as James Harden and the Brooklyn Nets head to Staples Center on a four-game winning streak, though Kevin Durant remains sidelined.