Bayern Munich star Robert Lewandowski is regularly linked with Real Madrid and has admitted he was once asked to join by Cristiano Ronaldo. 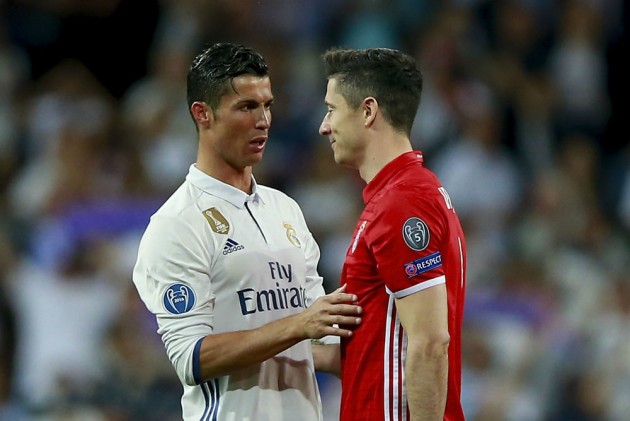 Cristiano Ronaldo and Sergio Ramos attempted to talk Robert Lewandowski into joining them at Real Madrid three years ago, the Bayern Munich striker has claimed.

Lewandowski has been repeatedly linked with the LaLiga giants during his decade in Germany with Borussia Dortmund and Bayern.

Despite the best efforts of Ronaldo and Ramos, the Poland international recently ruled out a future switch to Madrid and says he is happy to continue playing at the Allianz Arena.

Asked if it is true that Madrid skipper Ramos and former forward Ronaldo tried to persuade him to sign after a Champions League game in 2017, Lewandowski said: "Yes!"

Outlining the reasons behind his decision to stay in the Bundesliga, Lewandowski added: "You can go to the Spanish league or to one in another country, another great club.

"But for me it was not the most important thing. Where I am I have been able to reach my maximum level and I want to continue doing well.

"I am at one of the best clubs in the world, and I know I can be happy here.

"We are at a very high level, from the playing squad to the sporting facilities. It's all much easier when playing for a club like this."

Lewandowski has scored another 39 goals this season, 25 of those coming in the league, and insists he has not lost any hunger for finding the back of the net.

"I spend the entire game asking for and wanting the ball," he said, in an interview with Spanish newspaper Sport.

"If I have scored a goal, I want another one. If I already have three, I must get a fourth.

"Sometimes my team-mates tell me: 'Don't you realise that we have another match in two or three days?'

"But for me, if you're having a good time, if you love the sport, and if you love scoring goals, it's never enough."