The batting was a mixed bag for both Sri Lanka and Afghanistan, but Dimuth Karunaratne saw his side edge a rain-affected tussle in Cardiff. This was Sri Lanka'a first win in the 2019 Cricket World Cup. 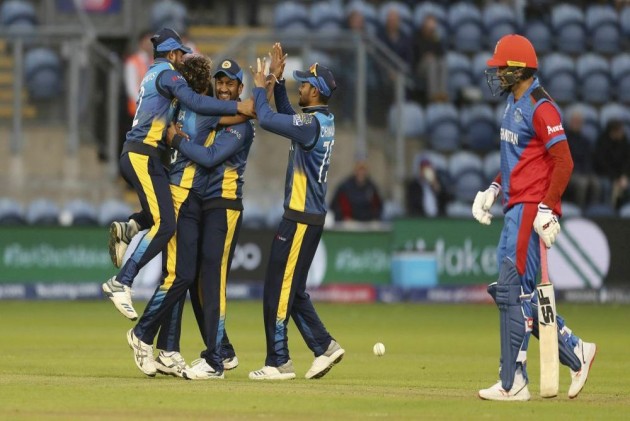 An opening-match thrashing at the hands of New Zealand left Sri Lanka with plenty to prove and they made a meal at times of seeing off Afghanistan on Tuesday.

But the result was the primary objective and Sri Lanka won, if only by 34 runs on the Duckworth-Lewis-Stern method.

Their innings of 201 all out in drizzly Cardiff was a missed opportunity to put together a big score, after cruising to 144-1 by early in the 22nd over.

The collapse gave Afghanistan a glimmer of hope, and briefly the underdogs had a shot at reaching their modest target, which was revised to 187, only to slump from 121-5 to 152 all out.

"I think we had such a good start. But suddenly we lost a couple of wickets," Karunaratne said at the post-match presentation. "That's the negative side on our part ... but otherwise the bowling and fielding was a high note.

"After losing the first game which was not easy we had to keep our minds positive.

"We have experience in these conditions. We lost against New Zealand and then we knew what we had to do here. We started really well and the only thing is we needed to capitalise in the middle part."

Speaking about the batting performance, he added: "We have to think about that."

Afghanistan captain Gulbadin Naib said: "At the start of the day, the bowlers especially we didn't bowl in the right areas so we lost the momentum from there.

"The wicket is not easy for the batters so to the bowlers I said to keep it line and length.

"The guys in the Sri Lankan side, credit goes to them for how they bowled."

He felt Sri Lanka's total was within Afghanistan's reach, adding: "The target is not that much, especially with how we've prepared in the last two to three months as the chasing side. We need some improving in the batting.

"I think we've missed something so we'll have to improve in other matches."