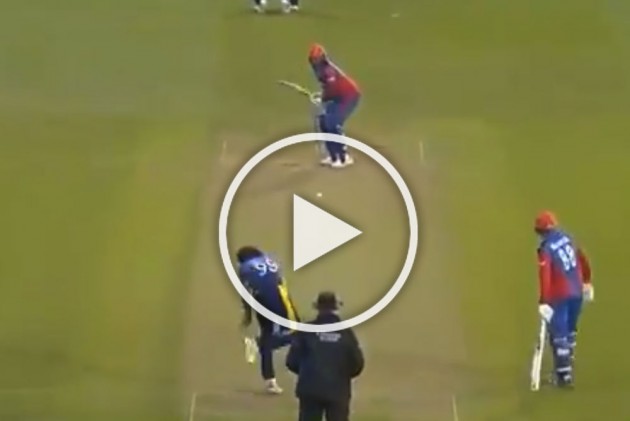 Veteran Lasith Malinga played a vital part in Sri Lanka's scrappy win over Afghanistan in the seventh match of the ICC Cricket World Cup 2019 at Sophia Gardens in Cardiff on Tuesday. The former champions defended a revised 187-run target in the given 41 overs.

Malinga, 35, rose to the occasion by taking three wickets for 39, including the match-winning wicket with an unplayable yorker. Fellow pacer Nuwan Pradeep took four for 34 as they averted what could have been another upset in the ongoing ICC Cricket World Cup 2019.

Not all fans were happy with Malinga's bowling action though. The Sri Lankan fast bowler, known as "Slinga Malinga" for obvious reason, has a very unique action, employing a round-arm action. But despite a seemingly a fraught action, his has been deemed legal as he doesn't bend his arm while bowling.

But there are some who challenges Malinga's action, even comparing it to a baseball pitch (throw). And after the Afghanistan match, particularly after that yorker, fans once again started talking about it.

Lasith Malinga finished it off in style with a ðÂÂ¥ yorker to dismiss Hamid Hassan.https://t.co/S3h3LX1ly6

'Brilliant! Lasith Malinga at his best!'

That yorker from Malinga is one of the three @Nissan Play of the Day moments. Thisara Perera features in the other two!

Which is your favourite? ðÂ¤Â

Still love watching Malinga bowl. No chance it should be classed as a legal action but who cares, it’s magic #CWC19

Malinga has celeberated the dismisal of last wicket like they have won the world cup, hats off to #BlueTigers for putting an experienced side under such a pressure. A very cheap action from a professional player.@KumarSanga2 @MahelaJay @Angelo69Mathews @PereraThisara

Lasith Malinga! Is a cheat his bowling action should be banned

I still don't understand how Malinga's action is legal...

How Malinga gets away with "bowling" action astounds me. Take that last wicket, it is clearly being chuck from his side, therefore, NOT an overarm delivery. #bbccricket

Don’t care what anybody says, I’m still not having Malinga’s action #CricketWorldCup2019 #AFGvSL

If Malinga’s action is legal, and lethal, why isn’t everyone doing it ?

My blood still boils watching Malinga’s action.
Should never have been allowed

Lasith Malinga, im sorry, that action aint legal, never has been never will be. In slow mo from behind it is a baseball pitch!

Sri Lanka salvaged pride by wrapping up minnows Afghanistan for 152 runs in 32.4 overs to set up a 34-run victory in the rain-affected clash.

cMalinga now has 325 wickets from 220 ODI games, 12 less than former India captain Anil Kumble, who is at nine. Another Sri Lanka, Muttiah Muralitharan leads the pack with 534 scalps followed by Wasim Akram who has 502 to his name.

Malinga is also now the fifth most successful bowler in the World Cup history, with 45 wickets, behind Aussie great Glenn McGrath (71), Muralitharan (68), Akram (55) and Chaminda Vaas (49). Indian pace duo of Javagal Srinath and Zaheer Khan has 44 each.