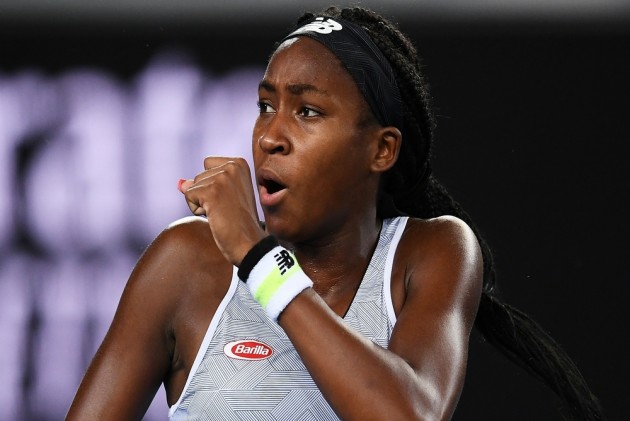 In a powerful speech, Gauff told a crowd outside Delray Beach City Hall to engage in "tough conversations" and "use your voice", stressing racism was a problem that involved everyone.

The death last week of African-American man George Floyd while in police custody in Minneapolis, Minnesota, has sparked protests across the United States and beyond.

Gauff has called on her social media followers to campaign for justice to be served in that case, and in her speech she repeated a message she shared earlier in the week: that "being silent is choosing the side of the oppressor".

Protests have centred on police brutality towards the black community.

Gauff said it was "sad" she was having to deliver a message on injustices her grandmother fought against half a century ago.

The teenager is a major rising star in her sport. She reached the fourth round of Wimbledon last July as a 15-year-old and won her first WTA singles title in Linz, Austria, in October. She is ranked 52nd in the world and is expected to be a future top-10 star.

Billie Jean King, who led the fight for gender equality in tennis, praised Gauff's stance by tweeting: "Thank you, @CocoGauff, for using your platform to speak to both the young and the not so young about injustice. We stand with you and the entire black community."

Thank you for being a girl that my daughter will learn from and look up to . I promise that we will keep on teaching our kids the right thing to do so that they can pass it on too. It all starts at home !

This is the full text of the speech Gauff gave in Delray Beach:

"Hi everyone. My name is Coco and I just spoke with my grandma and I think it's sad that I'm here protesting the same thing that she did 50-plus years ago.

"Second, we need to take action. Yes, we're all out here protesting and I am not of the age to vote - but it is in your hands to vote for my future, for my brothers' future and for your future, so that is one way to make change.

"I saw a Dr [Martin Luther] King quote that said the silence of the good people is worse than the brutality of the bad people. So you need to not be silent, because if you are choosing silence, you are choosing the side of the oppressor.

My speech at the peaceful protest in my hometown of Delray Beach, Florida. #blacklivesmatter pic.twitter.com/Jeyswzt7n5

"I've heard many things in the last week and one of the things I've heard is, 'It's not my problem'. This is why I have to tell you this: if you listen to black music, if you like black culture, if you have black friends, then this is your fight, too.

"It's not your job, it's not your duty, to open your mouth to say Lil Uzi Vert is my favourite artist but I don't care what happened to George Floyd? Now how does that make sense?

"So I demand change now. And it's sad that it takes another black man's life to be lost for all of this to happen, but we have to understand that this has been going on for years. This is not just about George Floyd. This is about Trayvon Martin. This is about Eric Garner. This is about Breonna Taylor.

"This is about stuff that's been happening. I was eight years old when Trayvon Martin was killed. So why am I here at 16 still demanding change?

"Black lives have always mattered, they mattered then, they matter now, and they will matter in the future. Thank you."