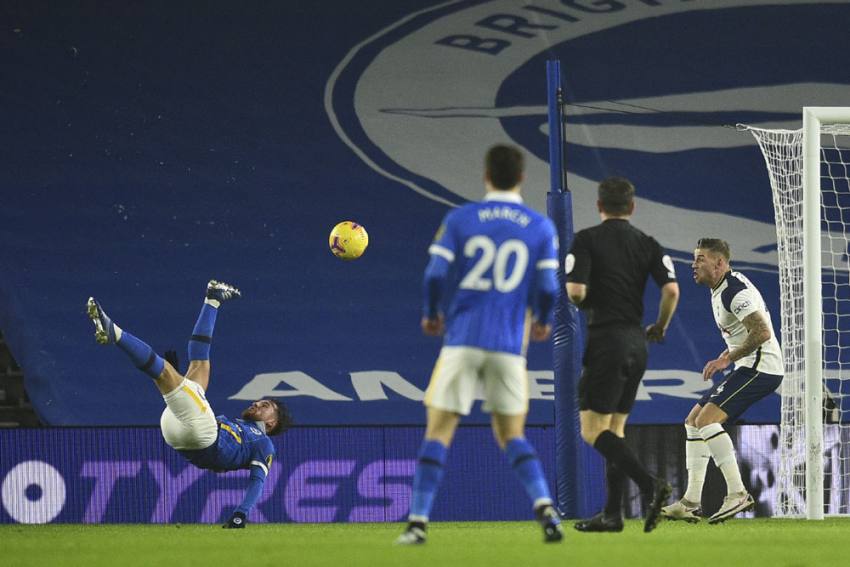 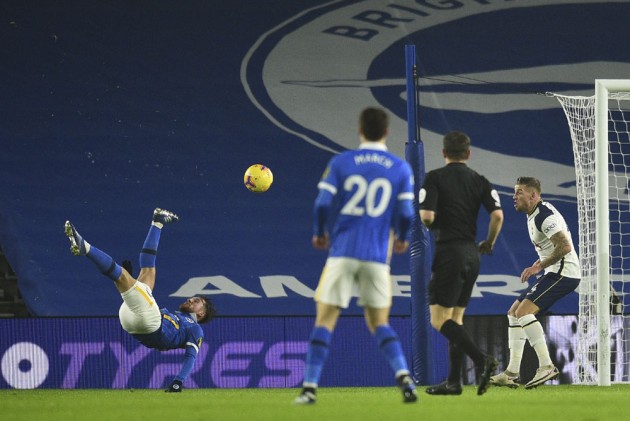 Brighton and Hove Albion ended a run of 14 Premier League home matches without a win as they overcame toothless Tottenham 1-0. (More Football News)

Shorn of Harry Kane, who suffered an ankle injury against Liverpool on Thursday, Jose Mourinho's side were second best for large periods of Sunday's encounter.

Indeed, bar two efforts from Spurs substitute Carlos Vinicius, Brighton had little trouble holding onto the lead given to them by Leandro Trossard's 17th-minute finish.

It came at the culmination of a slick team move befitting of Graham Potter's desired style of play, with Brighton not made to suffer for a late Aaron Connolly miss as they moved seven points clear of the bottom three.

Alexis Mac Allister has created two goals in his last three Brighton appearances and might have had another assist in the third minute when he teed up Pascal Gross, who prodded against the post.

With Spurs failing to get out of the blocks, however, Mac Allister and Gross combined to brilliant effect 14 minutes later – the latter racing onto the Argentine's neat throughball and squaring for Trossard to slot home.

The integral Mac Allister sent an acrobatic attempt just wide as Brighton probed for a second, with Steven Bergwijn then lashing across goal with Spurs' first attempt in the 30th minute.

1 - This is the 11th time a side managed by José Mourinho has had one shot or fewer in the first half of a Premier League game, with six of those occasions coming while in charge of Spurs. Blunted. pic.twitter.com/ouKEK5ghh6

In need of drastic improvement, Mourinho introduced Vinicius in place of Davinson Sanchez for the second half.

Vinicius was quickly involved as he saw a close-range header saved by Robert Sanchez, though Hugo Lloris had to be alert at the other end to deny Ben White.

Neal Maupay headed wide as Brighton threatened to turn the screw, though an excellent strike from Vinicius looked set to make them pay until Sanchez got across to make a fine stop.

Toby Alderweireld's magnificent block from what seemed a tap-in for Connolly kept Spurs' hopes alive, yet Brighton held on to seal a first home league win since they beat Arsenal in June.

What does it mean? Seagulls have daylight but sorry Spurs found wanting

With only Bergwijn mustering an effort in the first half for Spurs, a side managed by Mourinho has had one shot or fewer in the first half of a Premier League game for the 11th time – six of those matches have come during the Portuguese's Tottenham tenure.

Brighton, who have kept three clean sheets in a row, have taken what could be a vital step in their bid to avoid the drop. Spurs, without talisman Kane, sit in sixth, six points adrift of the Champions League places and 11 points off leaders Manchester City.

Former Boca Juniors midfielder Mac Allister has been made to wait to start having a real impact in the Premier League but, on Sunday's evidence, he has all the attributes to be a top-class playmaker.

Operating from central midfield, he created two chances and had a game-high seven shots – just one fewer than Spurs managed – though he will have been disappointed to only get one on target.

Bale's 'crucial moment' passes him by

With Kane out for the foreseeable future, Gareth Bale seems likely to be given more of an opportunity to stake his claim, yet the Welshman – who scored a late winner in the reverse fixture – failed to shine in what Mourinho had described as a "crucial moment" for the 31-year-old.

He was taken off in the 61st minute having created just one chance, with his inswinging corner teeing up Vinicius' 53rd-minute header, but did not manage a single attempt on goal and completed just 14 of 21 attempted passes.

- Tottenham have won just three of their last 13 Premier League games in which Kane has not featured (D4 L6), including none of their last four (D1 L3).
- Spurs have lost four of their last eight league games (W2 D2), as many as their previous 28 such matches beforehand.
- Mourinho has lost all three of his away league games at Brighton, the first time he has ever lost three consecutive away league visits to an opponent in his managerial career.
- This was Tottenham's 1,096th Premier League game, and the first in which they did not start a single English player. Indeed, the last side to name a starting XI entirely of non-English players were Arsenal against Spurs in July of last season.

Brighton travel to the north west on Wednesday to face Liverpool – now back on the winning trail – while Spurs host Mourinho's former club Chelsea a day later.