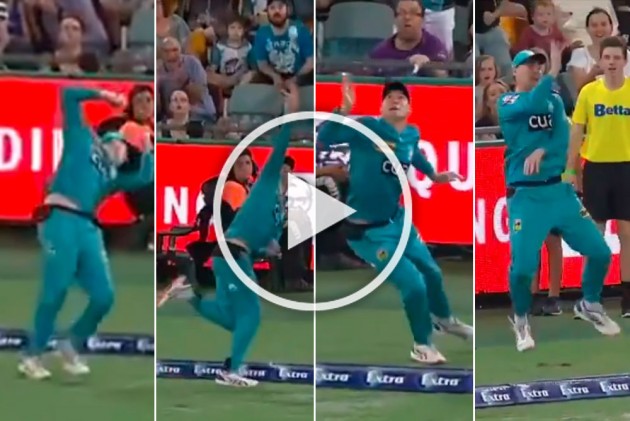 A brilliant effort on the boundary line by Australian cricketer Matthew Renshaw in the Big Bash League (BBL) at the Gabba on Thursday left umpires and fans bemused as the laws of the game had to be looked into before the batsman was given out in a game between Hobart Hurricanes and Brisbane Heat.

Renshaw took the catch at wide long-on from Hobart Hurricanes opener Matthew Wade, but proceeded to throw the ball in the air while still in the field of play. The ball then travelled over the boundary, which meant Renshaw was forced to as well if he wanted to keep the chances of the wicket alive.

Matthew Wade has to go after this spectacular effort from Matt Renshaw that will lead to plenty of debate about the Laws of Cricket! #BBL09 pic.twitter.com/wGEN8BtF5u

Renshaw benefited from an unusual change to the laws of cricket some six years ago which forced Wade to walk towards the pavilion as he was given out after the umpires convened.

"I had no idea of the rule really -- once he hit outside the field of play I didn't know if he was allowed to touch the ball or not," Wade told Channel 7 as quoted by www.cricket.com.au.

"Umpires said he was, and once they told me he was allowed to (go) outside the field of play and tap it back in, I knew I was out. It was pretty good work, I'm not sure he would've been able to have done that a few years ago."

A tweet from the official Lord's and MCC account cleared up any doubts, stating: "The key moment is when he first touches the ball, which is inside the boundary. He's airborne for his second contact."

The key moment is when he first touches the ball, which is inside the boundary. He’s airborne for his second contact.pic.twitter.com/ZTWMjAhffT

New Zealand all-rounder Jimmy Neesham was among those to call for a rule change and Wade would no doubt agree, having been sent on his way after clearing the rope twice in his first knock of the competition.

I’ve got no problem with where he left from. It’s where he ends up. After he touches the ball he needs to end up back in the field of play.

If that’s not the rule then the whole thing is farcical and the rule needs to change. https://t.co/Y797AsxP5G

The Laws of Cricket were updated in October 2013 to make catches like the one Renshaw effected, legal.

Clause '19.4 Ball beyond the boundary' of the Laws of Cricket was updated in October 2013 for the explosion in boundary-line athleticism brought about by Twenty20 cricket. Under this clause, the catch is legal.

The laws also make it clear the player's first contact with the ball must be made inside the boundary.