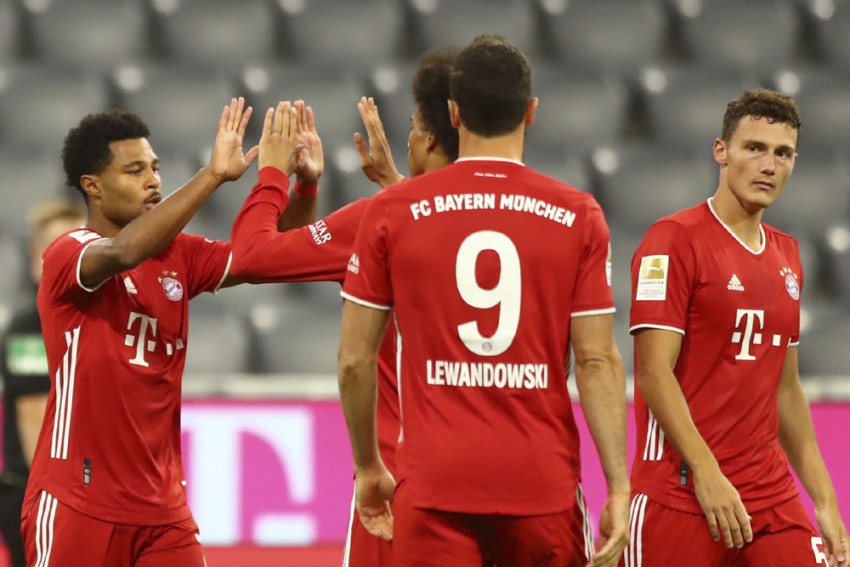 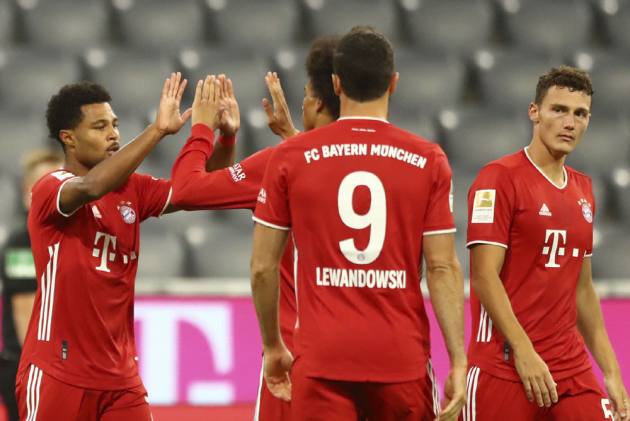 Bayern Munich started the defence of their Bundesliga title in ominous fashion as a Serge Gnabry hat-trick helped them to a stunning 8-0 win over Schalke at the Allianz Arena on Friday. (More Football News)

A mere 26 days after winning the Champions League, Hansi Flick's side showed no signs of tiredness and powered into a fourth-minute lead thanks to Gnabry's superb strike.

That was added to by Leon Goretzka after 19 minutes before Robert Lewandowski swept home a third from the penalty spot shortly after the half-hour mark.

Gnabry completed his hat-trick with two goals inside the opening 15 minutes of the second half before Thomas Muller, Leroy Sane - making his debut following his July move from Manchester City - and 17-year-old Jamal Musiala completed Schalke's humiliation.

Bayern started in blistering fashion as Gnabry controlled Joshua Kimmich's long pass over the top, turned away from his marker with a deft turn and whipped a superb left-footed strike past Ralf Fahrmann from 18 yards.

Flick's side bamboozled Schalke's backline with relentless pressure and the hosts were unsurprisingly undone again shortly before the midway point of the first half when Goretzka slotted home from the edge of the penalty area after being picked out by Muller.

Lewandowski - who scored 55 goals in all competitions last season - opened his account for the 2020-21 campaign from the spot in the 31st minute after he had been brought down by Ozan Kabak, while Niklas Sule crashed an effort against the post shortly before the interval.

Bayern started the second half like they did the first, Gnabry slotting into an empty net two minutes after the restart after Sane had pushed the ball past an onrushing Fahrmann.

Sane was the provider again after 59 minutes, teeing up Gnabry to seal his hat-trick from 10 yards, while an outrageous rabona from Lewandowski set up Muller to add a sixth in the 69th minute, the 31-year-old's side-footed volley squirming underneath Fahrmann.

What does it mean? Schalke floored by merciless Bayern

An empty Allianz Arena and Bayern's utter - and frequently embarrassing - dominance gave this game the air of a training match. Schalke were wretched but they will not be the last team to be humiliated by Bayern's frightening attack this season. That is 52 out of a possible 54 points in the Bundesliga during 2020 for Bayern; it would take a brave person to bet against them winning a ninth consecutive league title this season.

Gnabry lays down a marker

The former Arsenal and Werder Bremen forward enjoyed his best ever goalscoring return last season, plundering 23 goals across all competitions in a stellar campaign. If this display - full of pace, power and an abundance of goal threat - is anything to go by then he will cruise past that total this term.

Kabak the worst of a bad bunch

No Schalke player can escape criticism after such an insipid display but Turkish defender Kabak was particularly poor. He clumsily brought down Lewandowski for the penalty that led to Bayern's third goal and made just two successful tackles during a game to forget.

Ahead Of IPL 2020, Did Fantasy Cricket Giant Dream11 Conspire With Google To Try And Knock Out Paytm?